Perhaps Ian Rotten, face soaked in blood after a Home Run Derby Death Match, said it best: “Never in my life, in my career, have I ever seen an individual like the Necro Butcher. Insanity? Yeah. Craziness? Yeah. Bottom line — toughest son of a bitch in the business.”

Hailed as a “deathmatch wrestling God” by hardcore wrestling fans around the world, the legendary Necro Butcher’s career has been immortalized in an eight-disc DVD set, aptly titled, Deathmatch Legend: The Ultimate Necro Butcher Collection, released by HighSpots. 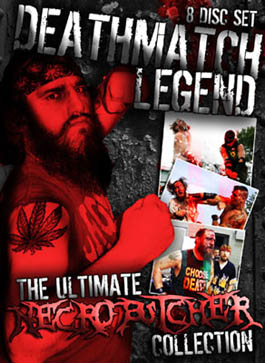 Making his CZW debut on disc one, Necro Butcher battles Wifebeater in a Staple Gun, Mouse Traps, Falls Count Anywhere Match. Within minutes, Wifebeater staples Necro Butcher’s t-shirt to his tongue in a wildly entertaining bout that sets the tone for both discs one and two. Over the next three hours, Necro Butcher faces the likes of Ian Rotten, Brain Damage, and Nick Cage in a variety of ultraviolent matches that include Four Corners of Pain, Fans Brings the Weapons, and Cage of Death.

But the highlight from Necro’s days in CZW, found on the first disc, is a tag team deathmatch where he and “Mr. Insanity” Toby Klein take on “Sick” Nick Mondo and Wifebeater, beating each other senseless with light tubes, panes of glass, and barbed wire boards. Horrific and gruesome, every weapon under the sun is utilized in this one, including jagged strips of wood barged with rusty nails — or, as the announcer so eloquently referred to it, “broken s–t on a stick.”

Discs three and four showcase Necro Butcher’s toils in Big Japan Pro Wrestling against the likes of Yukihiro Kanemura, Masada, and Shadow WX. Compared to Necro’s matches in CZW, these bouts contain fewer weapons, but are no less intense and fun to watch. There’s even some comedy, as Yuichi Tanigushi delivers an onslaught of crotch-in-face maneuvers to the Necro Butcher, to the fans’ delight.

As the match rages on, they spill out into the crowd as Necro Butcher and Tanigushi find themselves battling inside a port-o-potty. The conservatively dressed audience — made up primarily of men in dress shirts and ties — makes for any interesting juxtaposition to the hardcore violence and blood soaked rings of Big Japan.

Disc five brings us back to North America as Necro Butcher stomps his way — often barefoot on thumbtacks — through the hot and dirty rings of IWA Mid-South. Wildly imaginative, and at times sickening to watch, Necro Butcher bashes opponents with cheese graters, electrified light bulbs, and live lobsters — which splatter all over the ring in a disheartening display of animal cruelty.

But it’s on discs six and seven where Necro Butcher’s talents really shine as some of his most memorable matches take place in IWA Mid-South. For those looking to sway wrestling purists to the allure of Necro Butcher, there are four high-profile brawls that are wildly entertaining and extremely brutal — two with Low-Ki, and the other two with Samoa Joe.

As far as hardcore bouts go, the highly-anticipated dream match and first encounter between Samoa Joe and Necro Butcher in 2005 is a tremendous battle where the only weapons involved are a chair and a guard rail, proving that Necro Butcher can deliver a compelling match without deathmatch weaponry. This match, along with their 2006 rematch, is worth the price of the DVD box-set as Necro Butcher takes the beating of a lifetime, and keeps coming back for more.

Equally entertaining are Necro Butcher’s brawls with Low-Ki (currently wrestling as Kaval in WWE), as the excitement of the crowd and atmosphere in the small gymnasiums are intense, and unlike anything else found on the DVD set. Like Rocky Balboa, Necro Butcher is determined to stay on his feet until the end, as Low-Ki pummels him relentlessly with head butts, knife edge chops, and his trademark, Krush Kombo (two shoot kicks to the chest followed by a high speed roughhouse kick to the head of a kneeling opponent).

Rivalling the brutality found in his matches against Samoa Joe and Low-Ki is a brawl Necro Butcher had with “Mr. Insanity” Toby Klein. Here, Necro Butcher takes a powerslam off the bleachers and onto the gymnasium floor where, remarkably, he gets back up — which makes for an unforgettable “Holy s–t!” moment found on disc six.

As the extensive eight-DVD set draws to a close, Necro Butcher clashes with Rollin’ Hard in a Taipei Death Match, before one of the smallest audiences — a few dozen fans — seen on the compilation. But despite the size of the crowd, Necro Butcher gives it his all as both men are shredded with glass in one of the most insanely violent matches found in this compilation that delivers one memorable hardcore deathmatch after another.

Extensive, and at times exhaustive to watch due to the extreme graphic nature, Deathmatch Legend is, indeed, the ultimate Necro Butcher collection. With top-notch video quality throughout the entire set, it’s a must have for anyone drawn to the mystique and allure of the Necro Butcher. A deathmatch wrestling God, and a true original.