“The War Machine” Rhino is revved up for this weekend’s TNA Hard Justice pay-per-view and seems thrilled just to be in the promotion after his last two “miserable” years in the WWE. TNA will present Hard Justice live from Universal Studios in Orlando, Florida on Sunday, August 13 at 8 PM ET/5 PM PT.

“All around, I love Samoa Joe’s style — it’s in your face and he’s tough. And you can’t take anything away from Monty. He’s proven it time and time again.” 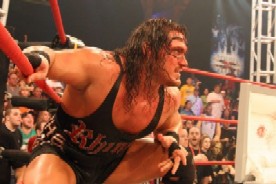 Leading up to the match was Rhino and Brown’s battle to a no-contest draw at last month’s Victory Road PPV, and Brown’s interference in a match between Rhino and Joe recently on Impact that ended with Rhino goring both men through a table.

Rhino said he also looked forward to watching the Challenge Match between Brother Runt and “The Monster” Abyss.

“That will be bloody,” he said.

Brother Runt’s tolerance to pain is well-established, said Rhino, who noted that in matches he had with him back in the old ECW, he would deliberately kick him as hard as he could just to get him to admit afterwards the blow “hurt a little bit.”

The Detroit, Michigan born Rhino said he also anticipates TNA’s Bound for Glory PPV, which takes place October 22 in nearby Plymouth, Michigan. TNA recently reported it was “thrilled” with the first day of sales for the PPV, which saw over 1,000 tickets sold.

“It is always nice to come back home. Sometimes it is a burden because everyone is asking for tickets. We sold about one third of the seats in the first two hours. It’s going to be fun and exciting. It really shows the growth of TNA and the fan support. That is what we need, what any company needs. The fans are there, they have a choice of what to watch when it comes to wrestling. For a few years before TNA opened they didn’t have a choice, but now the choice is out there. We have a national spot on Spike who have been really good and supportive. It really is a team effort.”

With TNA, wrestlers did not have to hold back and be told to wait for the next PPV, and were not warned against showing up the guys on the main event. The wrestlers are allowed to be more creative in and out of the ring as they are not tied to the whims of a creative writing team. Those booking TNA matches are former wrestlers themselves, a situation similar to that of the old ECW. Rhino repeatedly made obvious his excitement about being in TNA.

By contrast, Rhino’s stay in WWE was an unhappy one. Aside from his part in the Invasion storyline, Rhino had nothing good to say about his WWE tenure. He held the U.S. Heavyweight Championship for just under a month before losing it to Kurt Angle on Raw. Shortly after that, Rhino found out he needed surgery for two herniated discs in his neck. When he returned 13 months later, his career took a turn for the worse.

“You showed up for work and you were a puppet,” he said, explaining the WWE basically told him what to say and how to say it.

Rhino’s situation completely fell apart at a post-WrestleMania 21 party when he got into a public argument with his wife. They were in the process of getting a divorce, and who got custody over their daughter was a sore point of contention. In the course of the dispute, Rhino said he threw a potted plant, which eventually led to his dismissal, as WWE chairman Vince McMahon told him, “If it were anywhere but WrestleMania …” WWE fired Rhino April 11, 2005.

Rhino was miserable for two years in WWE, feeling as though he no longer had any goals, and considered retiring after being let go. He was wary of going to TNA, thinking that all promotions were the same. Still he took the opportunity and dove in, making his TNA debut in July last year. One of the highlights during his year in the promotion was an NWA World Heavyweight Championship win over Jeff Jarrett at last year’s Bound for Glory PPV. Although the reign was short, lasting only a week, Rhino’s goal is to get another NWA Heavyweight Title shot in the next couple of months and he hopes that if he receives the opportunity to carry the belt again, his run would be a lot longer.

In June WWE relaunched ECW and Rhino publicly revealed at TNA Hardcore War at the ECW arena the same month that McMahon offered him a contract to return to the WWE and wrestle for the new ECW once his one-year deal with TNA ended. After weighing his options, Rhino decided to stay where he was happy and signed a two-year deal with TNA. Rhino said part of his decision reflected WWE’s continued enforcement of a dress code policy.

“There’s a time and place for it,” he said, noting that if he were to be interviewed for (non-wrestling) TV, for instance, he would dress appropriately. “When I go to work, I don’t feel I have to wear dress clothes. I had asked Paul E. [Heyman] if there was still going to be a dress code and he said it was something Vince really wants. To be honest with you, The Sandman dressed up isn’t The Sandman. Sabu dressed up isn’t Sabu. I remember going into the ECW locker room and it was a really fun atmosphere. Vince is basically making money off of our hard work from years ago and it’s not the same.”

Rhino has watched the weekly ECW show to check how the competition was doing and what they were doing wrong, complaining about the lack of “real” hardcore matches. There was an exception with the blood spilled in the recent Big Show/Ric Flair championship match. But even that match seemed out of whack for the promotion given neither performer was ever part of the previous ECW incarnation.

“I’ve seen some of it and I wasn’t happy with it, it was hard to watch. It made me realize I made the right decision,” he said. “It is bad television. It’s a company that made your reputation on blood and you can’t even bleed on TV. As for Flair and The Big Show, I don’t remember them ever having a feud in the ECW arena.”

Rhino made clear what he thought of ECW’s new direction when he took the ECW Heavyweight Title he still owned from his reign before the company went out of business, and set it on fire on Impact last month. During the conference call, Rhino said he would have burned his TV title too if it had not been stolen out of an ECW locker room years ago.

“I did really burn it. For me it was a relief, a weight lifted off of my shoulders. I would have pulled it out of the bag, but I would have been sued.”

Rhino feels Paul Heyman sold out by staying in the new ECW and said many of his former peers currently at ECW thought the promotion was dead and they are there only to collect their paycheques.

“It’s bad writing and B-actors. On TNA, it’s not actors,” he said, comparing TNA favourably to the ECW of old. “There (ECW) you tried to make a difference. You missed a paycheque, but you still showed up for work. With TNA that same hunger’s there, that desire to make a difference, to entertain the fans.”

Rhino said the TNA heavyweight division had come a long way and he marvelled at the strength of one of its mainstays, Abyss, who he said could throw the 295-pound Rhino around like a “rag doll.” Bringing in Kevin Nash was another good move, as his invasion of the X Division was a good angle. Getting TNA to an even higher level was an ongoing process and that TNA could run a longer weekly program.

“It’s not going to happen overnight. But in the last four years, it’s been building. We definitely have the talent to go two hours. I thought we should run a few specials to test the waters. But I think our talent is a hundred times better than our competition in the ring and out,” he said, before explaining that while WWE had talent, the organization didn’t use it properly.

Asked whether TNA should create a Hardcore Championship, the three-time former WWE Hardcore Champion Rhino said it would have to be made unique because WWE turned its own Hardcore belt into “a joke,” stating “I tried to make it respectable again, but found the 24/7 defence stipulation stupid.”

He also hoped to start a program with his friend of ten years, Christian Cage.

“I’ve had a lot of good matches over the past year and a half,” he said, adding a series with Cage would be memorable. “I’m happy Christian Cage could be part of TNA, and maybe Edge one day too.”