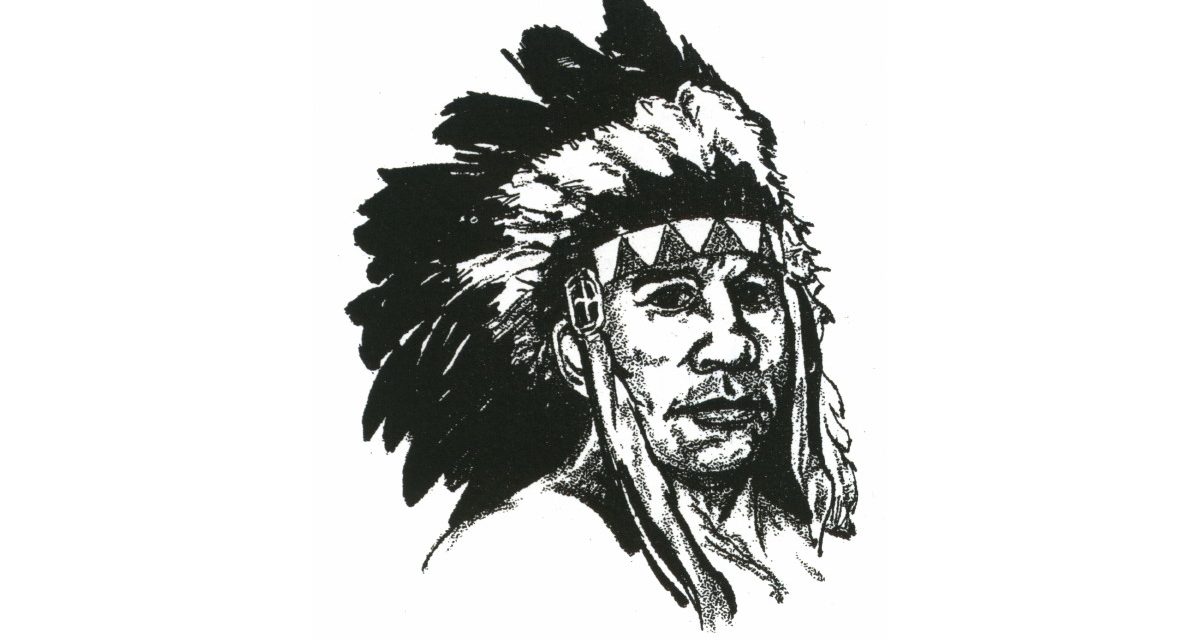 From his debut in 1933, until his retirement from wrestling in 1955, Saanich, B.C.’s Chief Thunderbird was the first big name native wrestler from Canada. “He was one of the originals when it came to the Indians wrestling,” said Don Leo Jonathan. 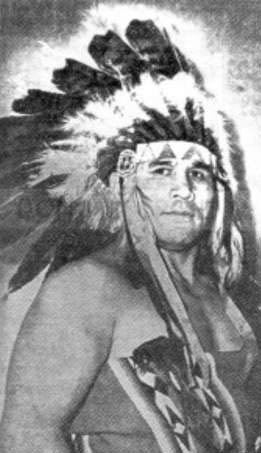 He was born Jean Baptiste Paul in 1896, the hereditary chief of the Tsartlip Indians at Brentwood on Vancouver Island, son to Tommy Paul and grandson to Ben Paul, both who were noted chiefs with the tribe.

“My people wanted to make a medicine man out of me,” Thunderbird recalled in a 1965 interview with the Victoria Daily Colonist newspaper. “They kept putting me in cold water as part of the ritual. Finally, I ran away from home to attend a mission school at Kuper Island, near Duncan. I wanted to be an athlete more than anything else.”

At Indian college in Tacoma, Washington, called the Cushman School, “The Chief” was an active athlete, getting a remarkable eight sports letters in boxing, wrestling, baseball, basketball track and field, football, soccer and lacrosse. The feat made the “Strange As It May Seem” syndicated feature in newspapers.

As a boxer, Thunderbird won 27 of 32 pro fights, breaking both hands at various times. Wrestling would beckon. He often told the tale about being able to beat his adult coach in wrestling while at school.

He took part in an international water competition in 1933 in Coupeville, Washington, winning many events against other native warriors.

During the festival, he got his first taste of pro wrestling, with a touring athletic carnival show. According to The Ring magazine from October 1936, “The Chief didn’t pin the ‘carnival champion’ but he amassed the large sum of five dollars for the five minutes that he had spent in the ring before being pinned. The following evening, the Chief again returned and again he faced the ruler of the athletic arena. This time the bout was a different story. After fifteen minutes in which he matched his strength against the tricks of the carnival grappler, Thunderbird was grudgingly declared the winner when the ‘champ’ was unable to continue.”

Virgil Hamlin, a promoter in the Pacific Northwest, was instrumental in encouraging Thunderbird to take up pro wrestling. Another key figure was August Sepp.

In 1937 in Walla Walla, Washington, he faced the great Ed “Strangler” Lewis in a outdoor bout at the ballpark. Thunderbird lost. “I figured I knew something about wrestling before that bout,” he said in 1965. “How wrong I turned out to be.” He also faced such big names as Jim Londos, Bronko Nagurski, Mike Mazurki and Lou Thesz. 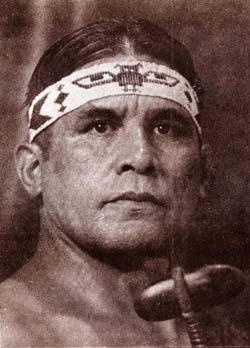 Entering the ring in full native regalia, including a feather head-dress and drums pounding, Chief Thunderbird was a noted attraction across North America, but even more so in England, which he toured in 1951-52 and 1954-55.

“The Red Indian warrior has made a terrific reputation for himself in this country in the wrestling ring, and due to his broadcasts over the B.B.C. is probably the best known Indian Chief ever to visit Great Britain,” reads a March 1951 program promoting Thunderbird vs Pat O’Reilly. “Everywhere he has appeared there has been ‘house full’ signs displayed long before starting time, and there is no doubt he is a fine wrestler.”

“He preceded me to England,” said Quebec native great Billy Two Rivers. “When I got there, the people I met spoke of Chief Thunderbird and assumed I knew him! I said, ‘No, this is a big country.’ I never met the man.”

“They treated me like a human being over there,” Thunderbird once said, and joked to the British reporters upon his arrival, “You must have kept all your nice people here-and sent your mean whites to my country. Because they certainly wound up stealing it from us Indians.”

Popular lore has Thunderbird stopping traffic in Picadilly Circus, and terrifying small British children who had grown up to believe that all Indians must be bad guys. 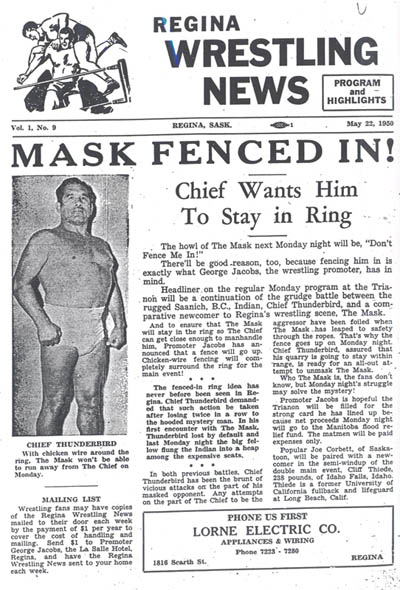 Thunderbird’s big move was the “Saanich Snap,”,which was similar to an “Indian Deathlock,” but he used his arms to gain the submission.

From his west coast home, he made many trips to Australia, New Zealand and Hawaii, with his first trip to Australia being in 1939. He also toured India in 1955.

“He wrestled in Hawaii before I ever dreamt of becoming a wrestler,” recalled Kinji Shibuya. “I remember him because he used to sing those Indian chants.” In Hawaii, Chief Thunderbird teamed often with Chief Little Wolf.

For reasons lost time to time — probably related to World War II — Thunderbird took some time off from his wrestling career, and returned to action in the late 1940s. The Ring had a different tone to its story on Chief Thunderbird in its January 1948 edition. “He tips the beams at 239 pounds and is noted for his great strength. His knowledge of wrestling is limited, but the holds he has mastered carry him a long way.”

He retired from wrestling in 1955 when he broke a leg in two places; he had told people that he wanted to wrestle until he was 60 years old.

During his retirement years, Thunderbird worked as a gardener, which had been a lifelong passion. A 1951 story in the Daily Colonist described his hobbies. “Thunderbird himself expresses his lively interest in the world through drawing and handicraft, making music by ear on a variety of instruments, and executing native dances of other lands as well as his own. His garden is ornamental as well as useful with evidence of a taste for woodworking. His early professional Indian costumes were of his own making.”

Jean Baptiste Paul died Wednesday, November 23, 1966 in St. Joseph’s Hospital, in Saanich, BC, after being hospitalized for two weeks. He was 71, and was survived by his wife, Julia; three sons — Harvey Andrew (Jack), Roy and Carl; three daughters — Mrs. Gordon (Juanita) Underwood, Mrs. Maurice (Jeanette) Barrett and Mrs. John (Freda) Cooper; a brother, Paul; his sister, Mrs. Elsie Roney, and 29 grandchildren. His well-attended funeral mass was at Our Lady of the Assumption Church, in West Saanich Road.

Shortly after his death, members of the Brentwood Women’s Institute began campaigning for an official recognition for the area’s most famous citizen. A totem pole was commissioned, done by Thunderbird’s nephew Benjamin Paul, and unveiled to the public in August 1969.

It bears the following inscription: “Friends and neighbours raised this Totem to honor a great Chief of the Tsartlip Band, Jean Baptitste Paul, 1896-1966. All the world knew him as Chief Thunderbird, greatly skilled in athletic games and world champion wrestler.”

– with thanks to Geoffrey Castle at the Saanich Municipal Archives