Writer Thomas Edward couldn’t find a novel that focused on his fascination with mixed and women’s wrestling — so he wrote one. 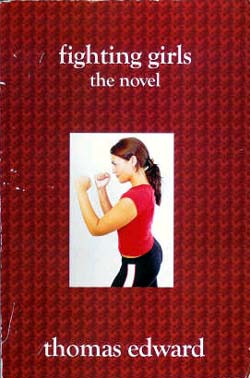 Fighting Girls follows one Ken Webb, a 22-year-old indy wrestler trying to propel himself up the ring ranks and at the same time through those of life.

Set in 1979 and in the fictitious promotion, Eastern Wrestling Alliance (EWA), Webb is not your typical rookie.

For starters Webb is bisexual and because he weighs only 155 pounds, he is automatically forced into the plight of a jobber.

The twist — instead of giant heavyweights pounding the crap out of him, the promoter Tony Altimore decides that Webb will be in singles matches against the women.

“I’ve got to bring wrestling into modern times,” Altimore tells Webb. “People are tired of this Cowboys versus Indians shit. In a few months, it is going to be 1980. Our country is changing. People’s attitudes are changing. They’re building casinos in Atlantic City. Everything is changing so fast. We have to stay ahead of the curve. Fans are ready to see women competing as equals. We have to be cutting edge, gender-breaking, controversial. That will sell tickets and get us television ratings. Beautiful women defeating men in a wrestling ring. That will get somebody’s attention.”

And the crowds do come. But Webb pays a price.

The memorable and much bigger women wrestler characters in the promotion: Cindy Domi, Linda Armstrong and Beth O., compete with each other to batter poor Webb worse than the other in subsequent matches. In addition, Webb must face the personal repercussions of losing these mixed matches.In his own thoughts he expresses that not only is he fighting girls inside the ring, but outside it as well. Being a bisexual male, he has faced the dilemma of wanting to be one of the guys and wanting to fit in. It was one of the reasons he got into professional wrestling, to be the tough guy. To be seen as macho. And now his plan may have backfired.

Fighting Girls is definitely not your average wrestling book. It’s definitely for mature readers because of its sexual content.

But Edward must be given credit for doing his research and producing a most unique wrestling novel.

The wrestling scenes are descriptive and he knows his holds. The conversations amongst the characters delve into imperative aspects of a wrestling show such as ring psychology and telling a story in a match.

And, for once, all the women wrestler characters are muscular, strong and smart. These are the real deal. There are no diva search hopefuls here.

Edward said he didn’t like how wrestling promotions portrayed some women as “basically strippers and adult entertainers, very few of them have any wrestling skills at all. I wanted to show them as athletes, as athletic women who liked to fight.”