Not just another Hero

The last time he wrestled for Mississauga’s UWA Hardcore Wrestling promotion, Chris Hero got into an altercation with an audience member. Despite that incident, he’s hoping that local fans will give him a “hero’s” welcome this Friday night when he makes his return to the company.

But even if they don’t, it’s not likely to faze Hero (real name Chris Spradlin), who regularly wrestles in front of a hostile audience — Philadelphia fans, who some would say are the craziest fans in wrestling — as a star of that city’s Combat Zone Wrestling. It was in Philly, after a recent CZW show, that SLAM! Wrestling sat down with Hero to talk about his career, up to and including his upcoming Mississauga visit.

It’s a career that began eight years ago, though he was a wrestling fan long before that.

“I was a WWF fan growing up,” he said. “I liked all the colourful characters, the Ultimate Warrior was my favourite. I stopped watching it in the early to mid ’90s, and I didn’t start following it again until right before I graduated high school in 1998.”

“A friend of a friend was going through wrestling training and was going to have a match. I never had any concept of what independent wrestling was, so I was kind of interested. I went to the place and trained for three months and then I had my first match.”

Unfortunately, the first school he joined wasn’t the greatest in his view, and he soon left to seek further training at more legitimate camps. Indeed, the list of his instructors reads like a veritable who’s who of the industry.

“I trained quite a bit at Les Thatcher’s school, and did a couple of camps with Dory Funk Jr. when he first opened up the Conservatory. I started working a lot of different independent shows, and then I lucked into a tour in Europe. I had no business being on the tour at the time, but fortunately, I made some good contacts there, and I was able to make a small career out of wrestling. I worked a lot for IWA Mid-South. Ian Rotten and Tracy Smothers both helped me out a lot there. From there, it was a snowball effect.”

He was also fortunate to learn various styles of wrestling from the masters, including the distinct European style from Dave Taylor, Fit Finlay and William Regal, as well as lucha libre from Jorge “Skayde” Rivera, who was the head trainer at the Toryumon school in Mexico. Eventually, the student became a trainer himself, and Hero started teaching at some of the camps. In 2004, he started running the CZW CHIKARA wrestling school, a job he holds while still maintaining a schedule of wrestling nearly ten times a month.

“(At one point before I started training guys), I wrestled over 300 days in a little less than two years. But now,” he added, smiling, “I make more money.”

His diverse training background is certainly evident in watching his matches, and Hero believes it enables him to wrestle with just about anyone. That includes anyone on the rosters of CZW and Ring of Honor, with whom CZW is engaged in an interpromotional war. While it would seem that Hero’s style is more oriented towards that of ROH than the hardcore brutality that CZW is known for, he is quick to refute that view.

“Ring of Honor uses a lot of talented guys, I’ll give them that. But I am so far against everything they stand for. They have the guys who have great builds, but I think it’s more important what you do in the ring. Guys like me and Super Dragon, we’ve gone there and done better than many of their own guys have done. CZW has been the hottest thing in independent wrestling all year — and I’m very happy about that.”

And while the 6-foot-4, 230-pound Hero recognizes that many CZW fans may prefer hardcore violence to his primarily technical game in the ring, that won’t change who he is nor what he does.

“The stereotypical CZW fan is there for blood. They’re not there for fancy wrestling or intricate storytelling — they’re there to watch people get maimed and bloodied. But the thing is that I can get them to reach off of whatever I do. There’s people that hate me and scream obscenities at me, and there’s people that love me and appreciate what I do. I’m not going to change myself to cater to a small group of fans. I’ve had success just about everywhere I’ve gone, and I’m going to continue to do that. I’m better than those people who don’t actually care about the wrestlers and just want to see people get injured.”

Another person who Hero won’t change for is the UWA fan with whom he got into that scrap in Mississauga. Though Hero does acknowledge that that things got too far out of hand and he could have handled the situation differently, he feels he wasn’t entirely to blame for what happened. 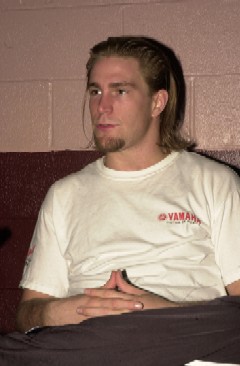 “I wasn’t completely in the right, but I know I wasn’t in the wrong. A fan hit me. Fans should never hit a wrestler. I’m never going to go out of my way and hit a fan for doing nothing. But once he put his hands on me, (I felt he had) crossed the line. I know two wrongs don’t make a right, but I think I was justified in what I did. But I hope, and I don’t think it will happen again next time.”

While getting past Friday without a similar altercation is a short-term goal, Hero has a list of others that he hopes to accomplish in the sport as well.

“I want to continue to improve,” he said. “I’ve wrestled in 25 states and 13 countries. I want to wrestle in all 50 states and in every country that has wrestling. I never want to be complacent. I want to stay injury free. And hopefully I’ll be making more money. Some guys like A.J. Styles and Christopher Daniels make a lot of money on the indy scene — but that’s the rule, not the exception. I want to be the exception. Maybe a contract somewhere, who knows? I just want to maintain success, maintain my improvement, and keep growing as a performer in order to entertain the fans.”