Turned off by naked women wrestling 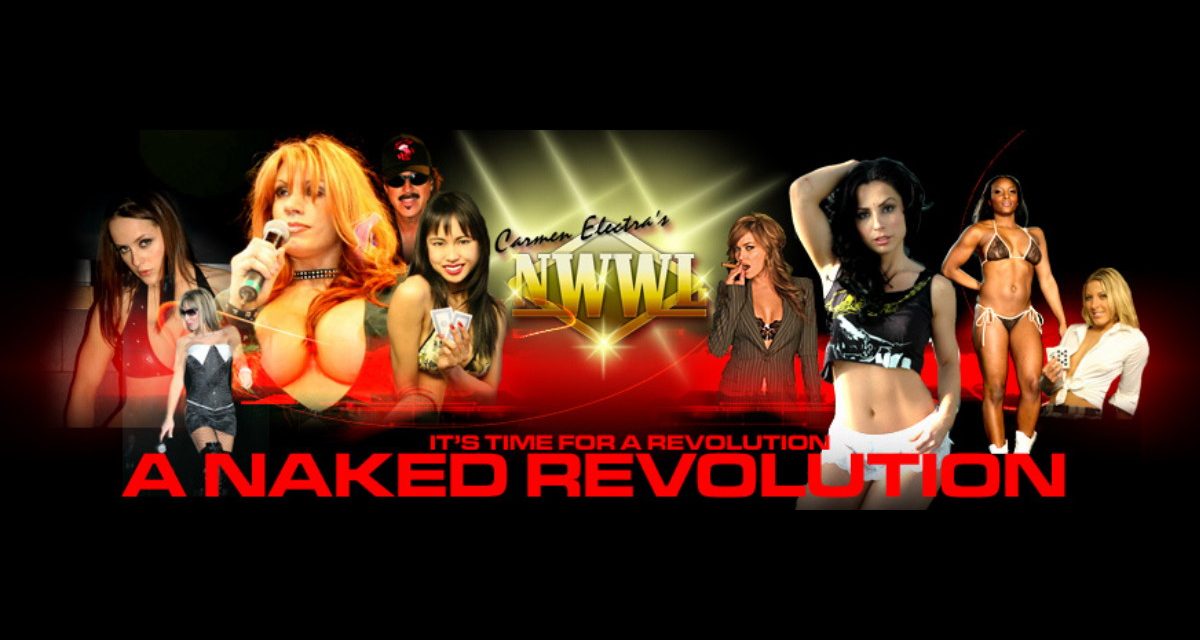 TORONTO – Say what you will about Carmen Electra’s Naked Women’s Wrestling League, but they have absolutely nothing to hide. Unlike some other wrestling companies that merely tease their fans by having their women appear in scanty outfits but never deliver the goods, NWWL strips itself of any false pretenses and gives the audience the real deal. You want to see Naked Women wrestling? Brother, you’ve come to the right place.

The right place on Monday night was the Docks nightclub in Toronto, where the NWWL taped its next pay-per-view show in front of an invitation-only audience of hundreds of (mostly male) fans. And what a show it was. 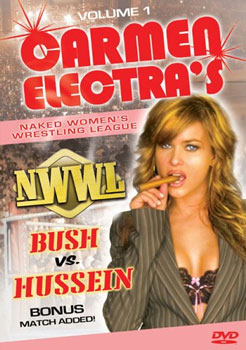 Model / actress / next Mrs. Bob Kapur Carmen Electra kicked off the show, whipping the crowd into a frenzy with her poignant question, “Do you guys want to see some Naked Women?!?” (psst … Carmen, honey? Did you really expect them to say no? I meen, jeez, it’s not like they thought they were there for the church social. The sign says Naked Women’s Wrestling … not too many ways to take that. What’s that? Your head hurts now? That’s okay, you just lean it on my shoulder … that’s right …).

But, what’s this? That’s Jimmy “Mouth of the South” Hart. He’s not a Naked Woman! What is this, some kind of bait and switch?!? Oh, no, wait, Jimmy has just confirmed it. There will indeed be Naked Women Wrestling in a little while. First, though, there will be four matches featuring women in bikinis. Okay, Nearly-Naked Women, that’ll work.

Though “work” is probably not the best term when describing the actual wrestling that went on. Flair-Steamboat this wasn’t. However, to be fair, the buxom beauties with names like Trish the Dish, Ninja Chops, Cleopatra, and Josieann the Pussycat did seem to try hard. And what they lacked in psychology, they certainly made up for in spirit. And Nakedness … well, Near-Nakedness for now. Lots of hair whips were employed, along with the occasional body slam. And, presumably to accentuate the Near-Nakedness, lots of back bridges and arches, chest chops, and rollup pinfall finishes. (An aside: The NWWL hired Toronto trainer Ron Hutchison to train the girls a little in the finer points of wrestling, much like he helped Trish Stratus, Tracy Brooks and Gail Kim.)

The highlight of these matches had to have been Mandy Weaver, a stunning competitor whose previous claim to fame was that she played one of the Mary Anne’s on the quasi-reality show, The Real Gilligan’s Island. She seemed very energetic and honestly excited to be participating — reminiscent of Christy Hemme when she was still in WWE. But, enough about that … let’s get to the Naked Wrestling!

Finally, after a brief intermission, Carmen introduced a couple of clothed (boo) women, and the clothed (yay) Jimmy Hart who introduced the clothed (boo) April Hunter. I didn’t really pay attention to this, since nobody was Naked. And then, it began, with a rematch between the two competitors who wrestled in the first bikini match of the night. And they wrestled the exact same match — the same hair whips, the same chest chops, and the same back bridges and arches, even leading to the same rollup pinfall finish. But this time … it was Naked.

But you want to know the strange thing? Naked Women Wrestling isn’t as great an idea as it may seem like on paper. Let me explain. Did you ever see that episode of Seinfeld where Jerry’s girlfriend kept walking around naked? George thought that this was a great thing, but Jerry, surprisingly, wasn’t too thrilled with the situation. He went on to explain the difference between “good naked” and “bad naked,” citing the difference between a woman brushing her hair (good naked) and a woman straining to open a jar of pickles (bad naked). Naked Women Wrestling: bad naked.

The powerful spotlight flooding the ring seemed to magnify every muscle ripple, every jiggle, every bounce — and for reasons I can’t fully articulate, this just wasn’t appealing. In fact, it was actually kind of disturbing. Now, don’t get me wrong; I like Naked Women as much as the next guy. But some activities are better left covered up, and, based on what I saw on Monday night, wrestling is one of those things. I left before the first Naked Wrestling match finished, and I never looked back.

Of course, for those that did enjoy what they saw, my views probably won’t change their mind. They’ll probably order the pay-per-view when it becomes available, and maybe even go to their website and order a Naked Women Wrestling DVD or something. And to those people, I wish the best — enjoy and have fun. Maybe it’s better on the screen than live. As for me, I’ll be content with seeing Naked Women Not Wrestling. If there are any volunteers out there … call me. Just don’t tell Carmen, she might get jealous.

Bob Kapur has never wrestled naked, and the world is a better place for it. Ms Electra is encouraged to email feedback at [email protected].