Tired of the same divas and knockouts? There’s a solution now available that is at once rather revealing but for a good cause. 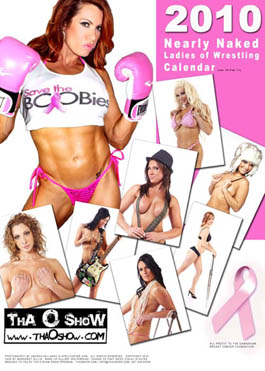 The 14-month calendar — Jan. 2010 to Feb. 2011 — is produced by Tha O Show, a Toronto-based internet wrestling radio show. All profits are being donated to The Canadian Breast Cancer Foundation.

One of the show’s hosts, Donnie Abreu, a former SLAM! Wrestling columnist came up with the idea.

“Tha O Show has gotten in the habit of producing a significant product each year. Last year it was the first-ever indy wrestling album [Oblivion!]. This year I wanted to do something different, and at the same time give back,” said Abreu. “I had the brainstorm back in October, which is breast cancer awareness month. Knowing people who have been affected by breast cancer made me want to do something to support their fundraising efforts.”

The women in the calendar, though perhaps not mainstream names — yet — donated their time willingly for the cause.

“The Prize” April Hunter contributed her own original photos for the calendar. It’s a personal thing for her.

“My mom was diagnosed with stage four cancer in August,” said Hunter. “She herself was a nurse in a children’s cancer hospital and both my brother and I have always rallied for cure activism… this just seemed perfect when Tha O Show asked me to do it. I hate cancer!”

The oversized 13.5″ X 19″ calendar, printed on heavy 100-pound glossy paper and professionally coil-bound, is only available online for $29.99.

“I think it should sell well considering how beautiful all the hotties in it are, though!” predicted Hunter, perhaps the best-known name in the calendar.

Others in the calendar include Miss Danyah, Cherry Bomb, Kelly Couture, Rinnie Sinn, Melissa Coates (who flew from the United States at her own expense for the photoshoot), Amy Victory, and Ianna Titus.

“I got involved with the calendar because it’s supporting a cause close to my heart and anything I can do to bring awareness to it, I will,” said Ontario-based wrestler Cherry Bomb.

The statistics behind breast cancer stirred Danyah Rivietz into action.

“I got involved because breast cancer is the most commonly occurring form of cancer in Canadian women. One in nine women will develop breast cancer in their lifetime, and that statistic in itself is scary enough to make anyone realize that something must be done about this awful disease,” Rivietz said. “This calendar is my way of helping out and giving back. I donated my time, and my body to help generate some revenue for a great organization.

“I also got involved because Donnie Abreu from Tha O Show is a very close friend of mine. When he first talked to me about the concept of shooting a calendar with all proceeds going to charity, I was extremely excited, and happy to get involved. I didn’t even have to think about it, I said, ‘Yes’ right away.”

Apart from Hunter’s contributions, the rest of the original photos were by Andrea Kellaway, a Toronto photographer (and occasional SLAM! Wrestling contributor). Phat Dogg Visual Studios in Toronto donated the space for the shoot, and the make-up artist, Hillary Whitebread, and hairstylist, Margaret Gillis, worked gratis as well.

“Shooting was a blast,” said Kellaway. “We took most of the images in a 12-hour period. It was a long hard day.”

It was a mix of professionals and amateurs posing near-naked.

“I was a little nervous at first! However, once the camera started shooting I got into it, and it was actually a lot of fun!” said Cherry Bomb.

For Miss Danyah, it was the opposite. “I was not at all nervous during the shoot. I model professionally in addition to wrestling, and my full-time job, so this was an easy project/transition for me,” she said. “In addition to my modelling experience, I was blessed to work with a great group of people. We had hair and makeup artists on set, and shooting with Andrea Kellaway is always a treat. She is an incredibly talented photographer, with a great eye. She captured some incredible shots, that are both sexy and classy.”

And as for Melissa Coates, it was old hat. “I’ve done several covers and posters for fitness magazines, including MuscleMag International, Flex Magazine, Ironman, Muscular Development Magazine, Muscle and Fitness, Reps,” she listed, “and a few bikini calendars and swimsuit videos as well, so I’m pretty used to wearing very little. ‘The smaller the dress, the bigger the press,’ right?”

Kellaway, who got involved because her aunt had both breasts removed because of cancer, talked about the experience. “Shooting so many models — all ranging in experience levels — was challenging, but we came up with a fabulous product, that I am really excited about sharing. It was great that everyone gave their time to such a worthwhile project. Cancer affects all of our lives and with continued support, we will eradicate this disease. I look forward to next year.”

Abreu isn’t willing to predict how sales will go, but costs are at a minimum by the Lulu.com print-on-demand service.

“We are hoping to capitalize on the global reach of Tha O Show — hoping our listeners step up and support the cause, as well as others who may not be listeners, but are interested in some very sexy — but classy — photos of absolutely gorgeous women,” he said.