Mastiff opts for school over OVW

Stay in school. Go to college. Have something to fall back on. How many times have we all heard parents and teachers give these pieces of advice while growing up? Despite the words of wisdom, all too often pro wrestlers (and athletes in general) are seen hanging on well past their prime because they have no other career path to follow.

This fate will certainly not be the one in store for 20-year-old Empire State Wrestling (ESW) phenom Will Smith. Better known in the New York area as Mastiff or Will Christiansen, Smith has decided to put his schooling first before making a run at being a full-time wrestler. “I am currently a physical education major at Niagara Community College,” he told SLAM! Wrestling. “Then I plan to transfer to SUNY Brockport, or University of Buffalo to pursue a teaching career.” 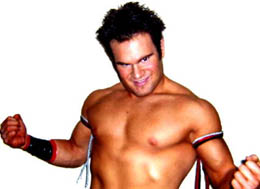 The Niagara Falls, New York native began his quest for wrestling glory four years ago at the local indy promotion, Empire State Wrestling. “I got started in wrestling when two good friends of mine told me that a place called Empire State Wrestling was looking for new wrestlers to train and maybe use on their show,” he explained. “I was in 11th grade in high school and was only 16 so I couldn’t wrestle and just had to train.”

Smith’s training went on for a grueling two years until he was allowed to turn pro at 18 in 2003. Local independent stars like The All Knighters (Sexay Monkey Robin Knightwing and The Joverine Joey Knight), Beth Phoenix, and the Ghetto Wizard Kevin Grace all played a substantial role in moulding the impressionable teenager into the up and coming performer that he is today.

Similar to any young wrestler, Smith also studied and attempted to emulate his WWE heroes to try and add to his ring repertoire. “I had many heroes growing up such as Chris Benoit, Dean Malenko, and the late Eddie Guerrero. Those are the main influences on my wrestling career. I have studied these wrestlers over and over again and I’ve learned a lot from them, such as ring presence, and performance to variations of moves that can be used in the ring.”

The year of 2005 was a breakout one for Smith, as his exciting match style had begun to gain him some recognition. For one, he was listed in Pro Wrestling Illustrated‘s Top 500 list under the alias Will Christiansen.

The owner/promoter of ESW, Ray Erway, believes he knows why this 5-foot-9, 195-pound up-and-comer is beginning to raise eyebrows in wrestling circles. “From the moment he comes out, his charisma and intensity show. Matches are action packed and his technical skills are great,” Erway said. “Will also works out religiously in the gym and in the ring and it shows in his look and performance.”

Apparently Erway isn’t the only one taking notice of Smith’s talents. The ESW owner told SLAM! Wrestling that TNA’s Scott D’Amore made Smith a last-minute addition to a card he was booking. “Scott D’Amore gave him a spot on the August Ballpark Brawl show in Buffalo, New York after seeing him in a training seminar the day of the show,” bragged Erway.

With his star steadily on the rise in the New York area, Smith started to think it might be time to take a look at the World Wrestling Entertainment’s developmental league, Ohio Valley Wrestling (OVW). Although not officially scouted by anyone from WWE, Smith did have the option of following in the footsteps of ESW alumni Robin Knightwing and J Man by signing up for the OVW training classes.

After two visits to the territory Smith decided that the timing was not right to make the move down south. “It just wasn’t the time for me to go down to OVW. It seemed like a great place but there were other things in my life I wanted to accomplish first, like getting a college degree,” he said. This type of message will certainly be a great point to drive home to students if and when Smith decides to get involved with teaching.

Something that has certainly given perspective on what being a teacher would be like is the training classes that Smith has taken over in ESW. Instead of using textbooks and chalkboards, the man known as Mastiff substitutes headlocks and body slams to educate his pupils.

The current ESW Heavyweight Champion fell into the teacher role almost by accident when then head trainer Robin Knightwing needed an assistant. “Physically, Mastiff stood out in the training class, and because of that Ray and I chose him to be the assistant,” Knightwing explained. “He is really goal oriented and has that intangible of being able to drive other people to success.”

After a few months Knightwing left to join OVW and ESW’s Erway needed his young star to fill in. Having been a pro for less than two years himself at the time, Smith was not completely comfortable as the man to be in charge of training the company’s new talent. “He stepped up when we needed someone to fill the trainer’s role and is doing a great job,” Erway said.

Being in charge of the ESW training program has in a way shown the 20-year-old how challenging a career in teaching can be. Much like in a normal classroom, students develop skills at different rates and have strengths in a variety of areas. “As a trainer you just have to realize that some guys are never going to be able to run those two miles a day that others can. Instead you have to give them stuff that they are good at and work on those areas,” explained Smith. Similar to how an elementary school instructor has to modify their curriculum to suit the need of the class, Smith has to adapt his training programs in order to get the most out of the potential new wrestlers.

Smith does make the general point that many of the newcomers to his class go in believing that pro wrestling is all glory and easy to do. Because of this he puts the students through rigorous training, causing most to drop out of the program after only a month. “I mainly stress getting in shape for the ring. I see too many people put in wrestling matches before they are ready for it. I pretty much beat up the new trainees so the ones who truly are dedicated will be rewarded,” said Smith.

However, training is not what the ESW standout wants to focus on at this point in his career. Smith said that since he has not been in the business for that long himself, he still needs to work on perfecting his own craft before trying to be a mentor to new students. Although Smith believes veteran performers are best suited to be schooling the trainees, he is proud of the fact that Erway and the ESW brass have the confidence in him to take on such a demanding task.

Despite his commitment to education Smith realizes that he must juggle both wrestling and college in order to take a run at a successful sports entertainment career. He plans on doing this by staying relatively close to home and touring the independent circuit instead of committing to a full time schedule for the OVW training classes. “I’d like to keep wrestling around the New York, southern Ontario area, working as many weekends as I can, and branch out from here if possible,” he said.

Although finishing college and attaining his teaching license are extremely important to Smith, he has that burning desire inside to perform and make pro wrestling his career of choice. “I plan to get to the point where I’m wrestling full time. My schooling is a fall back plan if anything in my life leads me away from the wrestling world,” Smith said.

Whether it is as Mastiff, Will Christiansen, or under any other alias, Will Smith’s practical life plan is sure to make him a success in whichever profession he chooses to follow.