Lucha libre star El Texano (real name Juan Aguilar) died during the evening of January 15, 2006, from lung and respiratory failure at the age of 47.

Aguilar was being rushed to the hospital in Guadalajara, Mexico for emergency surgery when he passed away and was pronounced dead at the hospital.

El Texano had been in poor health for several months, complaining of difficulty breathing, indigestion, and overall malaise. He’d reportedly put on quite a bit of weight in the last year and was adamant about “not using steroids or any junk.” 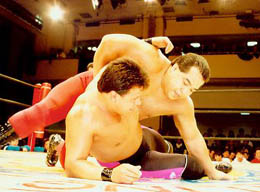 Dressed as a Texan, the 5-foot-6, 242-pound Aguilar was part of a legendary trios group known as Los Misioneros de la Muerte (Missionaries of Death), comprised of El Texano, El Signo and Negro Navarro. The team worked together throughout the 1980s.

They made for an interesting, memorable combination. El Signo has proudly proclaimed his forehead blade-scars the best (worst?) in the business, “worse than Dusty Rhodes and Abdullah the Butcher combined” as he told this writer in a 1992 interview.

Late in the 1980s, Texano was paired up with the similar Silver King (César González), and the duo was named Los Cowboys (The Cowboys). Texano and Silver King became Mexico’s premier tag team, feuding with Los Villanos and others great duos, and having UWA and WWA World Tag Team title reigns.

Los Cowboys worked for the Universal Group in Japan, taking on the likes of the Brasos, the Villanos, El Gran Hamada and Perro Aguayo, Santo Jr and Kendo and more.

In 1992, Texano wrestled on a WCW Clash of Champions TBS special in Charleston, SC, as Silver King II alongside González. The team lost to the Fabulous Freebirds (Michael Hayes and Jimmy Garvin). In 1993, the team jumped to the Consejo Mundial de Lucha Libre (CMLL) promotion, and taking tag gold there as well.