Have a jolly Hardcore Homecoming Christmas

Deck the halls with barbwire and steel chairs comrades, the season of giving is upon us here at SLAM! Wrestling. Yours truly, Commander Corey of the People’s Independent Wrestling Revolution (PIWR), has just the stocking stuffer for that jaded wrestling fan in your household this Christmas season. May I present Hardcore Homecoming An Extreme Reunion, the Platinum Edition DVD.

While it may be the time of year to wish peace on earth and good will to all men, not that long ago in the City of Brotherly Love, it was a time to wreak havoc in Viking Hall (ECW Arena) and mangle all who dared enter the wrestling ring. It would turn out to be the reunion of reunions for 2005, as the hardcore alumni of Extreme Championship Wrestling (ECW) gathered in their old stomping grounds to do what they do best, one more time.

The disc opens with the voice of ECW, Joey Styles (now the voice of WWE’s Monday Night RAW) hyping the main event matches. But what overshadows that is the brief interview with none other than Terry Funk. Anyone familiar with the intimate history of ECW knows all too well the crucial role Funk played in making the promotion what it was. It is here that Funk tells the viewer of how he was presented with a competing contract from WWE for significantly more money. Yet despite that, Funk, in that all too magical and emotional way, turned it down in favor of this show. As he put it, near tears, quote ‘I want to go back to the guys I love.’

Let the love… or should I say carnage, ensue comrades!

All four have significant history in the tag team ranks of ECW. While Chetti is no longer an active wrestler, both Anderson and Whipwreck continue to be active on the independent circuit, while Diamond currently heads his new faction, Diamonds in the Rough, in TNA. All four showed they can still deliver the goods to the Philadelphia faithful. Primarily, it was Anderson and Diamond isolating Chetti from making the hot tag to Whipwreck during the bout. In the end though, everyone got the chance to shine, with each competitor delivering their trademark finishers to an appreciative crowd.

Tracy Smothers vs The Blue Meanie

Well, there was some wrestling, but when there wasn’t, it was still entertaining. Smothers, a Nashville native, reprises his membership as a Full Blooded Italian (FBI) for the evening, with former stable mate JT Smith in his corner. Smothers is truly in his element jawing with the fans and has no problem getting the reaction he wants. Facing off against fan favorite, The Blue Meanie, this contest soon digressed from wrestling match, to a dance off. Now, let’s make something clear, neither one of these guys are candidates for the School of American Ballet. But as it turned out, the better dancer is not an issue as Smothers submarines Meanie during his performance. Like I said, it was entertaining, but that’s it.

This match was a tie for match of the night. It was a rare North American appearance for the agile 2 Cold Scorpio. Having spent the last several years in the NOAH promotion in Japan, Scorpio proved he still has what it takes when it comes to delivering stellar athletic performances in the year 2005. Kid Kash was an excellent choice as an opponent, a phenomenal athlete who was just cresting the peak of stardom when ECW folded. Both men gelled well in this one, with a great mixture of mat & chain wrestling, brawling and of course, high flying offense. While Scorpio assumed the role of confident veteran, Kash easily merged into the arrogant punk looking to steal Scorpio’s grandeur. Truly, they represented the side of ECW that is often overlooked – competent, athletic, passionate wrestling matches.

This one started off as a handicap match as Axl and Ian Rotten ganged up on Kronus, formerly one half of the Eliminators. With the crash of rap music over the loud speakers, the odds were evened up, as the Original Gangster, New Jack, made his way to the ring. From there… yes, it got bloody. But what did you expect? All of these guys have participated in some of the most innovative, violent matches in the history of ECW. The crowd just ate this one up, especially the antics of New Jack, which included a dive from a scaffold, plowing through a table where Ian Rotten laid. After the match, New Jack delivered a mandatory, profanity laced promo. Then again, what would a promo by New Jack be if it didn’t include profanity? But give credit, New Jack is mesmerizing when he’s on the mic, speaking from the heart.

Another great display of wrestling by two athletes who sadly it seems, were wasted when wrestling anywhere else. Lynn is just timeless when it comes to maintaining his stellar physical conditioning and sharp grappling abilities, never mind taking this match after recuperating from a major shoulder injury. Likewise, Credible showed everyone that while he may not be as active as he once was in the ring, he can still dance with the best. Credible was one of most over heels in the ECW and he promptly reverted back to that status this night when it came to expressing his affection (sarcasm here people) to the fans. The end result was a great showdown with a tonne of emotion, making this my second pick for match of the night. Each man was looking to prove once and for all who the better wrestler is, pulling out all the stops to achieve victory.

Raven vs The Sandman

As wrestling soap operas goes, it would hard not to rate the history of these two men as being perhaps the most controversial, yet memorable sagas in professional wrestling. What would an event of this magnitude be if you didn’t have Raven and The Sandman light it up (no pun intended) one more time. Just looking at these two and only one thing comes to mind: anti-establishment. Baring in mind some of the controversial angles they were involved in the past, such a moniker is quite appropriate in my mind. From the opening assault by Raven, using the mic and Singapore cane on Sandman, it was clear that this match would not be a wrestling clinic. It was a brawl, but that’s the only way it could be. One ladder, two tables and three Meaniesaults later, we have ourselves yet another hardcore classic confrontation from two certified hardcore icons.

This was the re-match of the infamous 60-minute triangle match that took place on February 5, 1994 at ECW’s The Night the Line was Crossed. The only difference this time was that the ring was surrounded by barbed wire! Granted, all three are no longer the wrestlers they once were, but this match was about athletics. This was about giving the fans the honor of baring witness to another notorious moment in wrestling history. And notorious it was, it all its gruesome reality. It didn’t take long before all three man found themselves draped in one agonizing position or another in the barb wire. You could not help but wince in watching the vulgar display of violence enfold, clothing and flesh ripped away in bloody fashion. One scene in particular that is edged in my mind is when Funk’s arm was entangled in barb wire, leaving the hardcore legend briefly helpless. All three men are revolutionaries, men who will forever be immortalized in professional wrestling for acts of notoriety. In essence, that is what ECW was. Rest assured, that was your main event.

There’s no shortage of bonus footage included in this two-disc set. True to the legacy that is ECW, the producers made a real effort to show just how interactive the event was. 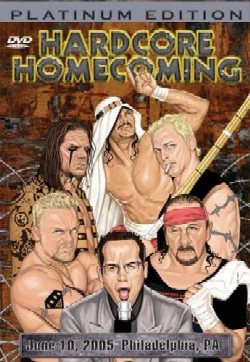 It is only appropriate to first mention the special dedication made during the show to those ECW alumni who have passed on from this world. To be blunt, there were too many names.

From Axl Rotten meeting with fans lined up outside Viking Hall, to fans having a chance to ask questions to the wrestlers after the show, viewers are left with a clear and envious vision of an event that was truly unique and intimate.

Then there are the special segments for those who follow the inner tribulations of Hardcore Homecoming. In particular, we see the backstage meeting of The Franchise Shane Douglas and his former valet, Francine. For those in the know, there was, for a time, some strain in the relationship between the two. If we are to assume that the footage shown was in fact not a work, then all is forgiven.

Then there is the interview with The Blue Meanie, who goes into great detail about the incident the following night at WWE’s ECW: One Night Stand Pay Per View (PPV). It was at the event in New York City where Meanie was legit assaulted by John Layfield Bradshaw, reopening an incision Meanie received the night before. Other details are revealed about what happened before and after the show.

You can also look forward to seeing interview snippets from the Forever Hardcore documentary.

But of all the extras that were presented, perhaps the one that pleasantly surprised me the most was the bonus matches from the now defunct XPW promotion. Here, fans will get a chance to see the likes of Douglas wrestling against the late Chris Candido. Other matches include Shane Douglas vs Terry Funk, Shane Douglas vs Justin Credible and Jerry Lynn vs Juvi “The Juice”.

Comrades, I salute this revolutionary DVD set. Granted, there may be some discussion over designating it ‘Platinum’, baring in mind that the documentary, Forever Hardcore, is not included. Debate this as you see fit.

My fellow SLAM! Wrestling scribe Comrade “Bloody” Bob Kapur (who makes a brief cameo on the DVD) remarked to me that no DVD could duplicate being in attendance at this one of a kind show. [See Torn between two ECW shows.] He will get no arguments from me.

But for those of you who were not there, this is your chance to look back on history in all it’s gruesome, spectacular and sentimental greatness. (The Platinum edition of the DVD was specifically made to be sold in retail stores, so there still is time before Christmas for you last-minute shoppers.)

With winter upon us, it grows more arduous in acquiring new DVDs to review here at the PIWR bunker. No doubt I could present more in-depth reviews if SLAM! Wrestling producer, Comrade Greg Oliver, would be so kind to make a donation to the PIWR Ski-Doo Mach Z sled fund. This model includes the Rotax 2-TEC SDI 1000 engine by the way!

Comrade Greg Oliver’s response: Commader Corey, I’ve always looked at snowmobiles as a good way to cull the herd. I’ll think seriously about it in your case.

Commander Corey is the leader of the People’s Independent Wrestling Revolution.