Anticipation is building to a fever pitch as The Great Canadian Wrestling Expo prepares to take the Oshawa Civic Auditorium by storm. Starting at 10 a.m. this Friday, November 4, and running until Sunday, the Expo settles in for a weekend of mayhem with a variety of comic book, sci-fi and, of course, wrestling events.

Organizers Dave Bigas and Leanne Gannon have orchestrated a tremendous wrestling experience that also includes some of the proceeds going towards charity. “The Sick Kids Foundation will receive one full day’s gate, as well as the money from Friday night’s auction, and the profit from the photo booth,” said Bigas.

Wrestling fans will be overwhelmed by the variety of activities inside the Civic Auditorium. These include wrestling matches every couple of hours, a KOCH Video screening room, charity auction, free autographs, photographs with the superstars, a wrestling trading card tournament, and over twenty-five merchandise vendors (including SLAM! Wrestling’s Greg Oliver with his two Pro Wrestling Hall of Fame books). With so many options, some of these events need to be elaborated on.

KOCH Video is the DVD provider for all of WWE’s projects and their screening room at the Expo will not disappoint. With the ability to seat between 250 and 300 people, KOCH will be airing several Wrestlemanias, along with documentaries and some sci-fi classic films. “KOCH is going to be showing the Toxic Avenger, Sgt. Kabukiman, Lipstick and Dynamite, Enter… Zombie King, Kaiju Big Battel, WWE DVDs, and many others,” said Gannon.

Friday’s charity auction has some interesting items in stock for any collector, with the best part being that all proceeds go to the Sick Kids Foundation. A few of the memorabilia pieces up for grabs will be wrestling t-shirts, autographed Expo jerseys and posters, along with autographed Kevin Sorbo (of Hercules fame) pictures.

The most alluring part of the Great Canadian Wrestling Expo for fans will be the matches themselves. Grapplers are invading Oshawa from all over Canada and the United States, representing nine independent promotions. These include Winnipeg’s upstart AWE, New York State’s Empire State Wrestling, Calgary’s Stampede Wrestling, UWA Hardcore Wrestling out of Ottawa, and several other Ontario-based federations. Spectators are going to have a rare opportunity to experience many of the top workers from the independent circuit that they may normally not have a chance to see. 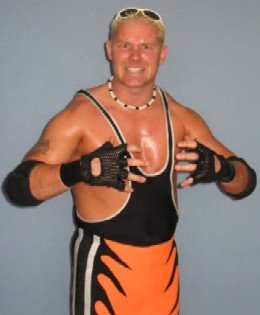 One such indy star who is looking to make an impact in a big way is “The Daytona Beach Bad Boy” Jason Cage. A police officer from Kingston, Ontario, Cage wrestles with Ottawa’s UWA promotion and is extremely excited to be participating at such a large event.

“Just the idea of competing at such a big event is an awesome feeling. I’ll have a ton of family in the crowd which makes me a bit nervous,” Cage told SLAM! Wrestling.

Cage is also eager to step into the squared circle against some of the WWE legends that will be in attendance. “I’m psyched about kicking the crap out of many former WWE stars. How many people can honestly say they beat up their wrestling hero? Ontario wrestling fans will remember the ‘Daytona Beach BadBoy’ Jason Cage for a long time to come!”

Speaking of WWE legends, wrestling fans of the 1980s-1990s will get their fill of nostalgia as names like King Kong Bundy, Koko B. Ware, Kamala, The Rock’s uncle, Ricky Johnson, and Jim “The Anvil” Neidhart all pull on the tights to show Expo fans what they are made of.

Legends will at times be teaming with indy wrestlers including an Ontario first, as “The Anvil” will compete alongside his daughter Nattie Neidhart in mixed tag action. Being a five-year veteran of the game and the current Women’s Pacific champion, Nattie is no slouch to singles competition. However, Nattie explains to SLAM! Wrestling that it is spending time with her father both in and out of the ring that she will be looking forward to most this weekend.

“I am so proud to be tagging with my dad. We’ve only teamed together one time before but the instant chemistry between us was unbelievable,” she said. Being the only third generation women’s wrestler in North America and the promise of incorporating some old Hart Foundation manoeuvres into the tag matches with her father, Nattie Neidhart is sure to be one of the highlights of this weekend’s Expo.

All the scheduled matches can be found at www.canadianwrestlingexpo.com with one encounter in particular deserving special attention. Since many wrestlers and their fans also enjoy science fiction, Expo organizers Bigas and Gannon have setup a unique matchup to try and settle an age old question. Who is mightier? Star Wars or Star Trek?

“On Sunday afternoon a Jedi knight and a Federation red shirt will fight to the death with Stormtroopers and Klingons looking on to ensure that no one escapes the ring,” explained Gannon. Certainly an interesting twist to an already jam- packed weekend.

City TV personality Ed the Sock will be performing the commissioner duties for The Great Canadian Wrestling Expo from November 4-6, and will also be announcing several surprise guests. With 25,000 square feet of action, and tickets being only $25 at the door or Ticketmaster, the Oshawa Civic Auditorium is definitely the place to be for anyone who loves wrestling this weekend.