OSHAWA, ON — The Great Canadian Wrestling Expo started off with a bang Friday at the Oshawa Civic Auditorium. The three day wrestling and science fiction extravaganza had loads of merchandise, KOCH videos, and over 65 wrestlers looking to make an impact.

Competitors from across North America pounced on Oshawa with several having to overcome turbulent travel situations. For example, Kamala arrived on an earlier flight at Toronto’s Pearson International Airport Thursday morning, prompting organizer Leanne Gannon to rush together an impromptu pickup so that the Ugandan Giant was not stranded. 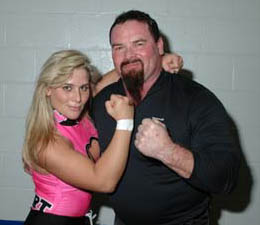 As well, many of the wrestlers drove long distances for this Sick Kids Foundation charity event, but none had more obstacles then Mainstream Wrestling Maritime talent. Dice, a six-year MWM pro from Cape Breton explained “We drove through heavy snowstorms in two parts of Quebec. It took us 21 hours, but we’re all glad we made the trip.”

Over 600 people came through the doors of the Expo and were treated to hourly wrestling bouts by nine indy promotions. UWA from Ottawa, Squared Circle out of Toronto, and Niagara Falls, New York’s Empire State Wrestling contributed about ten competitors a piece, showcasing their talents with high intensity matchups.

ESW promoter/owner Rey Erway says he is extremely pleased with the organization and professionalism of the Expo’s promoters Dave Bigas and Leanne Gannon. Also, Erway promised that fans will be impressed by one of his top stars, Mastiff, who will be performing on Saturday and Sunday. “Mastiff recently turned down an OVW contract to finish his education, and is ranked in this year’s Pro Wrestling Illustrated top 500 list. Fans will be amazed at what this guy can do.”

The combination of different styles and working with people for the first time was a definite highlight for all the indy wrestlers at the show. Up and coming Winnipeg native Zack Mercury certainly feels that watching different talent along with catching up with old friends from different promotions added to the appeal of coming to the Expo. “You can learn so much from watching different guys in the ring and it’s great seeing your old bros again. So hopefully we’ll have a good turnout and give some great matches.”

The charismatic, international wrestler and hometown boy Ash agreed. “I don’t really care where I wrestle but having so many different guys in one place is a great opportunity to show what you got to people you normally wouldn’t have a chance to work with. I can’t wait to kick ass all weekend long.”

For the WWE legends in attendance this weekend of mayhem, it is about meeting with long time fans and to say thank you for their years of support. King Kong Bundy has been wrestling for over 25 years now and is thrilled to be apart of an event as large as this weekend’s Great Canadian Wrestling Expo. “My career has been a glorious ride and I’m just looking forward to being here for three days and meeting the people. I’ve always loved the Canadian fans and coming to Canada, this is like a mini vacation.”

Former WWE superstars Kamala, Jim “The Anvil” Neidhart, King Kong Bundy, and Koko B. Ware, were all in action on Friday night and will be wrestling on the final two days of the Expo as well. In fact King Kong Bundy and Neidhart have issued challenges to a couple of the cockier independent competitors for Saturday and Sunday. Bundy will be squaring off against the powerful Chris Cage, while “The Anvil” will be teaming with his talented daughter Nattie Neidhart in a mixed tag match versus “The Daytona Beach Bad Boy” Jason Cage and Portia Perez.

SLAM! Wrestling even got incorporated into one of the matches involving Cornwall, Ontario, star Oddyssey and his tag partner Luke Slater, proving that anything can happen this weekend. SLAM! Wrestling writer Andy McNamara, and photographer Josh Crocker acted as managers for the team, shooting photos as Oddyssey and Slater pounded away on their opponents. In fact, Oddyssey was trained by two prominent wrestlers and is excited to be able to demonstrate his skills in front of the Oshawa audience. “I was trained by Jacques Rougeau, and after that by Carl Leduc. It was awesome learning from Carl, he got me ready. I’m so pumped to be wrestling in front of a big, loud crowd.”

The vendors added plenty of diversity to day one of the Expo, and more will be out for the remainder of the weekend, including SLAM! Wrestling’s own Greg Oliver with his Pro Wrestling Hall of Fame books. Comic books, Star Wars and Star Trek memorabilia, wrestling toys, posters, lucha libre masks, and more were available for fans to salivate over. As well, documentaries, sci-fi movies, current WWE DVD titles along with VHS tapes were for sale (some for as low as $2) as far as the eye could see, including rare Abdullah the Butcher and Sheik collections.

Besides the merchandise, charity auction, autograph and photograph sessions, it cannot be stressed enough how much wrestling will actually be going on. Nattie Neidhart is worth the price of admission alone, which is a very reasonable $25, as she showed a sensational work ethic on Friday night.

Besides being fan friendly, she also incorporates a variety of styles into her wrestling repertoire, making for a unique look. Nattie told SLAM! Wrestling, “I spent two months in Japan earlier this year, and the Japanese are really into women wrestling, it was great to be a part of. Along with what I learned in Japan, and my Dungeon training at home, I’ve also added some martial arts into my style. I’m really looking forward to wrestling with my dad this weekend and am heading back to Japan to wrestle at the end of the month.” 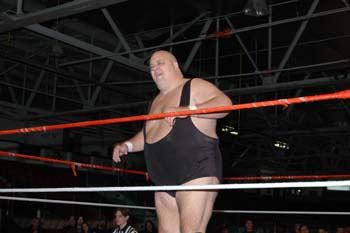 The two remaining days of the Great Canadian Wrestling Expo promise to be even more action packed than the first. More talent, such as TNA’s Chris Sabin, will be ready to rumble, along with Q & A sessions for WWE legends, and don’t forget to see The Rock’s uncle, Ricky “Soul Man” Johnson coming out of retirement to show a youngster how to take care of business old school. It has also been confirmed by “Hot Shot” Johnny Devine that along with regular matches he will be representing the Jedi knights as he will fight a Federation red shirt in the epic battle between Star Wars and Star Trek. Leanne Gannon is enthused about witnessing this “death match”. “Fans will be able to donate to Sick Kids in order to vote on who they want to win between Star Wars and Star Trek. This will definitely be exciting to see, and with Klingons and Stormtroopers around the ring, who knows what will happen.”

Make sure not to forget to drop by and say hello to the always entertaining Liana K. and Ed the Sock, who happens to be the commissioner for the Great Canadian Wrestling Expo. Wrestling and science fiction fans still have November 5 and 6 to stop by the Oshawa Civic Auditorium to experience the spectacle and in turn help out the Sick Kids Foundation.