Wow. What a Weekend the Great Canadian Wrestling Expo was! I have to send a big thank you to Dave and Leanne and everyone who worked hard to put on this huge undertaking.

For those of you not able to attend, the GCWE was a three-day wrestling show with booths of merch and various wrestling personalities wandering around the Oshawa Civic Centre. In total there were 50-plus workers throughout the weekend and over 100 matches, I believe. Insanity! This was a huge undertaking and really I thought the GCWE staff did an admirable job considering what and who they had to deal with. 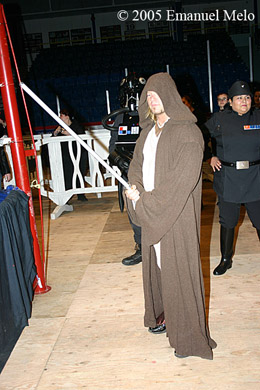 I got in on the Thursday morning and already had ride problems, so I had a very bleak outlook on the weekend going in. But the ride to lunch and the hotel changed all that — and I’ll tell you why later in my biggest markout moment in a loooooong time.

In all though, I had a really great time and got to work with some great young talent like Cody Deener and Jake O’Reilly. There were some standout talent that I noticed in Shawn Spears and TJ Harley, who have really come along and look great.

Oh, and don’t shoot with She Nay Nay. She bites!!! Hard!! Good thing she’s hot or I’d have to really stretch her. The partying we did throughout the weekend though … I think it could almost be called criminal if we didn’t have such a great time. I love some Crazy Steve! That kid is the bee’s knees.

Nattie Neidhart and her father Jim the Anvil were there reppin’ the Hart family and the first father-daughter mixed tag team ever! Always fun to see Jim, and Nattie is truly one of, if not THE, Nicest People ever!! It was great to sit and talk with her about stuff. She’s just gone back over to Japan and I wish her the best of luck and success.

But for me there were two big markout moments in the Expo, one a bit bigger than the other. The first, being the geek that I am, was the Star Wars versus Star Trek match on Sunday night. Upon hearing of this tremendous idea I heartily volunteered for the role of kick ass Jedi Johnny Devine. And was thankfully accepted in the role. My opponent for said momentous occasion was Ensign Jake (no last name redshirt) which was awesome!!!

The costumes and characters for both sides were fantastic! I made a very dashing Jedi, if I do say so myself. It was taped for The Space Network, I believe, and will air eventually. I will cross oceans of time to find a copy of this though, as it really was cool as all hell. Ensign Jake was the victor in the match — damn cheating Trekkies!! But fun was had by all and money was raised for charity so everyone left happy.

But the highlight of the weekend for me (other than hanging with Ruffy Silverstein and Chris Sabin) was without a doubt hearing the Ugandan Giant Kamala sing!!!!!! That’s right I said sing!!!! For the love of God, the man can barely string together coherent mumbling, but you have got to hear him sing!!! For anyone who is a fan of nostalgia — and music in general. I HIGHLY recommend you listen to his five-song CD. “Hollywood” has been my favorite song so far!

On that note I will take my leave. The AWE school is up and running here in Winnipeg.

And With TNA’s Genesis PPV and the WWE’s Survivor Series coming up its going to be a busy couple weeks for wrestling fans. Prediction: Petey Williams = new X Division champ. Petey’s still the man.