Bif Naked on rock and wrestling

With her dark black hair, tight muscular body and bevy of tattoos, it wouldn’t be a stretch to expect to see Vancouver rocker Bif Naked in the ring. There is no doubt there are comparisons between life as a musician and life as a pro wrestler.

“I don’t find the music industry to be cutthroat. Any industry that is the performing arts, because you are dealing with artists — i.e. people who take themselves far too seriously — there is going to be a lot of people who are trying to climb faster than you and will kick you off the ladder,” Bif Naked told SLAM! Wrestling in a phone interview. 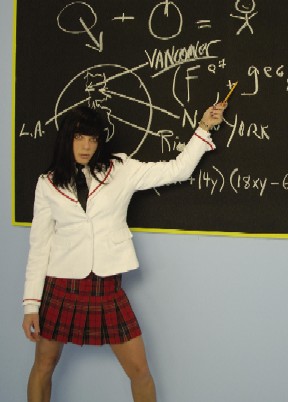 “You can’t get upset by that and the things people say about you because you are doing a public job and they will critique you. I always say ‘slow and steady wins the race.’ The key to success in any industry you are in is perseverance. It can’t be about money, and I think as long as you are able to carve out a living, stay healthy, take care of your parents if they get sick and feed your pets, everything else is just fun. People need to enjoy what they do, that is the key to success and happiness. Success is happiness not money.”

Many wrestlers speak of the loneliness of the road and the thrill of performing. Naked is on tour right now supporting her new CD Superbeautifulmonster and her words will likely ring true with wrestlers.

“The side effect of my job that has come to light; I have a couple of stalkers who are messed in the head. Ultimately I have a really modified existence and it is really isolating. I don’t date anymore, my last date was over a year ago, and the only time sometimes when I feel like somebody gets me is when I am playing because I am safe and can be myself when I am on stage and having a mutual exchange with my fans. They are there because they ‘get it.’ I feel like those are the only people in the world that understand me and that I understand them. I don’t know what I would do if I couldn’t play shows. Things go crazy and you are so busy but never alone or yourself. When it comes to the show I can relax, exhale and be myself and feel accepted and with my friends. That is the most important part of my life is playing shows.”

Naked admits to dabbling in being a pro wrestling fan. Her cover of Twisted Sister’s We’re Not Gonna Take It was featured on the soundtrack for the wrestling movie Ready to Rumble.

“Dee Snider has a radio show in Hartford and I have been on his show before. I saw Twisted Sister perform when I was in grade 10 when they opened up for Iron Maiden at the Winnipeg Arena. I took my little sister, who was mortified and cried the whole time, and we were in the fourth row center. Dee Snider spit on me, because he was spitting on everyone. That was the best thing that ever happened in my life I was so excited he had spit on us it was like I had been baptized. When we started doing that cover, we went and shot the video with Sting and I got to be on his shoulders and do stunts with all the wrestlers, it was exciting. Then meeting Dee Snider I thought I was dying. I was like ‘Well this has come full circle, I had better start making (funeral) arrangements.’ It was surreal. I could die happy because situations like that are just so extraordinary and I feel so lucky and amazed that I get to sing certain songs or meeting people.”

When she has time Bif will still tune in to wrestling.

“I keep watching it, but I don’t watch TV. I met Trish Stratus a long time ago in Toronto when she was at the Musclemag international show. I am a big fan of Musclemag. I love her so much. She and Victoria are awesome. There is that one guy who was on from Iraq (Mohammad Hassan), who was hot. I speak Farci, so if I met him I could speak to him. I mostly speak Farci or Hindi. If I met him I could speak that and go ‘Heeyy, how you doin?'”

Naked has had past TV experience on shows The L Word and Buffy The Vampire Slayer, so being on a wrestling show wouldn’t be a stretch.

“I want to be on a wrestling show. I don’t know that I want to wrestle although I do have martial arts experience. I just like big sweaty men. I’ve got to be honest — I love them and I want to grapple with them, is that wrong? Especially when I ovulate, I really want to get in the ring when I ovulate and just wrestle with some sweaty men.”

One can’t help but ask then, when sweaty WCW stars on the shoot for the We’re Not Going To Take It video surrounded her, did she ovulate?

“Video shoots are brutal. I was so freaked out and excited during the We’re Not Going To Take It video and I wanted to do a good job in my stunts. Plus David Arquette and Scott Cahn were there and they are kind of hot in a way. I was really nervous so I wasn’t actually ovulating.”