Known to many as “The Underground King,” Slyck Wagner Brown has enjoyed great success on the indy wrestling scene. Capturing championships nearly everywhere he has gone, Brown is closer than ever to realizing his goal of making the WWE.

On a January 2005 edition of Sunday Night Heat, Slyck Wagner Brown and partner, Johnny Heartbreaker (aka Romeo of The Heartbreakers) competed against The Hurricane and Rosey in a back and forth bout, an opportunity rarely given to outside talent. “All of my dark match appearances have been valuable learning experiences, I often wish that I had the chance to learn from WWE on a weekly basis.” Brown told SLAM! Wrestling. “Out of all of them, my favorite is the first, because it was then that I realized a small part of my dream.” 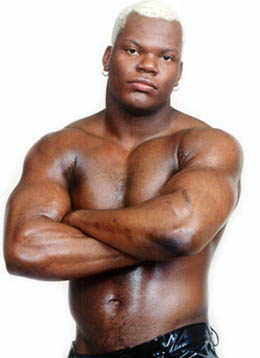 It’s a dream that Slyck had started thinking about back in 1997 when he first entered the doors of Critical Mass Wrestling. “I checked out Killer Kowalski’s school and I immediately knew that this is what I wanted to do,” he said. Born in Jamaica, Brown grew up in the Boston area and was heavily impacted by WWE and its stars. “My passion was professional wrestling, and guys like Shawn Michaels, Mr. Perfect and Bret Hart were my influences.”

While training was no walk in the park, the 6-foot-2, 235-pound Brown was already a well-conditioned athlete prior to entering the school; but as many people know, wrestling is not just an athletic sport. “I had problems understanding psychology until I went and trained at UPW with Tom Howard,” he said. There, Brown learned about ring psychology, while vastly improving himself. It wasn’t long after that Brown’s name became well-known amongst indy wrestling fans.

Competing in the New England area for the first few years of his career, it was there that he captured his first of 19 championships by defeating Mike Hollow for the NECW Championship in February 2001. Later that year, Slyck captured the New England Cruiserweight Championship, adapting himself to a faster-paced division. “I want to be a guy who can work with anyone. I want to be able to wrestle any style,” he explained.

Brown used his unique ability to adapt in a variety of ways, even becoming one half of the JAPW and 3PW tag team champions alongside April Hunter, to whom he has been romantically linked. “We were the first Inter-Gender tag team champions, and in a business where everything has been done, that was pretty cool,” he admitted. JAPW and 3PW would also see Brown represent the promotions as heavyweight champion.

With all the talk surrounding Brown, it was no wonder that three years ago, an upstart federation would bring him in as their headliner; that promotion is known today as NWA Cyberspace. “It feels good, I am proud of what the company has accomplished, and I hope they continue to do big things,” Brown said.

“Slyck and April Hunter were godsend to Cyberspace,” said NWA Cyberspace promoter Billy Firehawk. Derek Gordon, Director of Operations for NWA Cyberspace, concurred with his boss. “Slyck was given a gift to perform in this business, and when he wrestles, we watch like proud parents. His energy and passion reflect his commitment to the promoters as a worker, to the fans as a hero and to himself as the kid within chasing a dream. Slyck Wagner Brown doesn’t only think about what’s best for himself, he is a guy who thinks about what is best for the business.”

In April 2005, Brown, then NWA Cyberspace Champion, had an opportunity he dreamed of when he was child, to compete in a match with NWA World Heavyweight Champion Jeff Jarrett. “I remember watching Jeff (Jarrett) on TV, so having the opportunity to wrestle him for the NWA World Heavyweight Championship was both surreal, and a major accomplishment.”

NWA Cyberspace has also played home to Brown’s favorite feud to date, his one with “The Dawg” Rodney Mack, “Rodney and I have been feuding for quite some time now, and the fans seem to appreciate our efforts.”

By the same token, there is one feud that Brown feels would be equally as exciting. “I would really like to wrestle A.J. Styles. He is at the top of his game right now, and I could learn a lot from him.”

For now, the 26-year-old Brown is content with his career on the independents — one can’t argue with success. When asked what his plans for the next year were, Brown was optimistic. “I’m going to keep hustling, step my game up and see what happens.”

Slyck Wagner Brown is a major part of the NWA Cyberspace Shockwave TV Taping this Saturday, November 5th, in Lake Hiawatha, NJ, as he teams with April Hunter against Rodney Mack and Jazz in “Till Death Do Us Part II – MiXXXed Tag Team Grudge Match.” For details on the event, see www.nwacyberspace.com.

Chris Sokol is from Long Island, NY and over the past couple of months has only gotten “slicker”, having interview both “The Doctor of Style” Slick (the former WWF manager) and Slyck Wagner Brown.