Film Review: ‘Doom’ can’t quite live up to its legacy 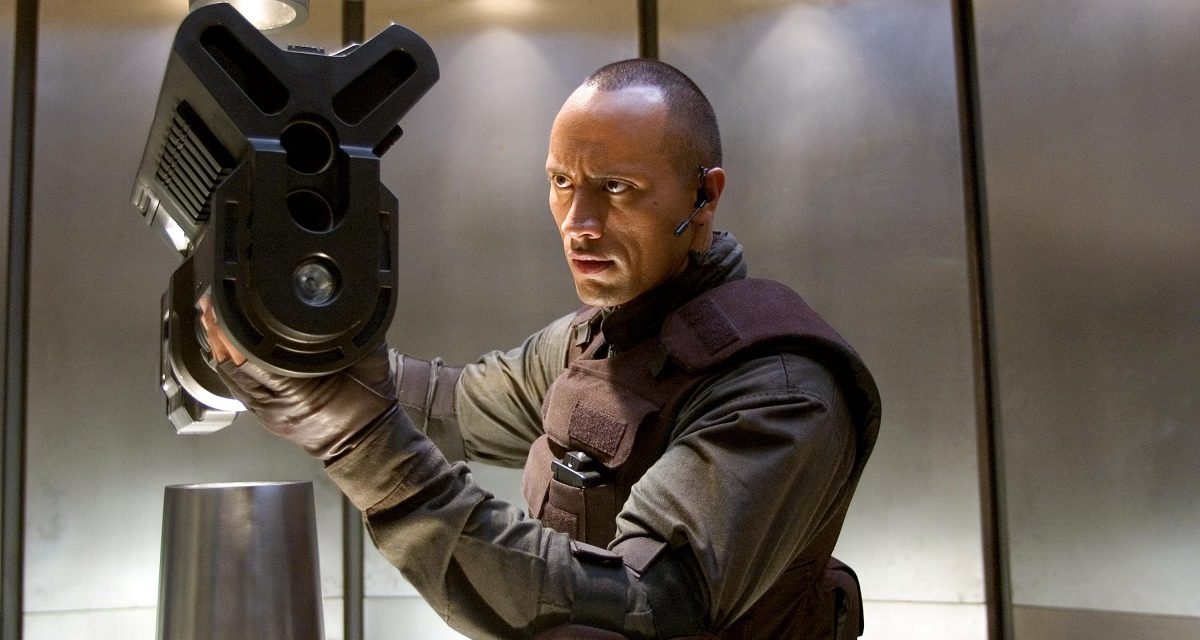 Most people of a certain age will remember that when Doom arrived on the video game landscape, it quickly became the bane of school studies. One wouldn’t have to walk too far through university residences before hearing violent weapons explosions, nasty snarling creatures, and of course, gamers crying for their mommies. With Doom spawning sequels, spin-offs and copycats in the gaming world, there was always that lingering question: would it work as a movie?

The answer, unfortunately for the video games faithful, is no. Doom falls into a tricky trap that ensnares many film adaptations from the realms of video games and comic books in trying to broaden its potential audience and losing something of the terrific source material. The result is a run-of-the-mill sci-fi semi-horror that fails to make the same splash as its video game namesake.

The film begins with a fine sequence of some classic “hear evil, but see no evil” scenes, where scientists run frantically through the hallways of their laboratory complex on Mars, trying to escape something that we don’t see, but it sounds nasty. When it seems that every scientist fails to escape, the story cuts to Sarge (Johnson – Walking Tall, Be Cool), who is the imposing leader of a ragtag crew of space marines. While the story has a couple of good surprises towards the end, the fate of this crew of soldiers is all too predictable. Too many movies feel compelled to surround the would-be heroes with a cast of expendable soldiers, meaning we’re just biding our time until they get killed off to allow the big-name actors to have the spotlight.

The middle of the movie features some genuine attempts at creating scares, but there’s nothing really more inventive than a number of creatures jumping out from the shadows. There’s some jump-in-your-seat shock, but not much suspense. Where the film really fails to capitalize on its potential is in trying to make the world of Doom pseudo-realistic. A great deal of energy is spent explaining the way in which human subjects, injected with alien chromosomes, become the beasties that haunt our heroes. Unfortunately, this takes the story out of the fantasy realm that it was originally based in, and the creatures are not nearly as fantastic as they could have been. 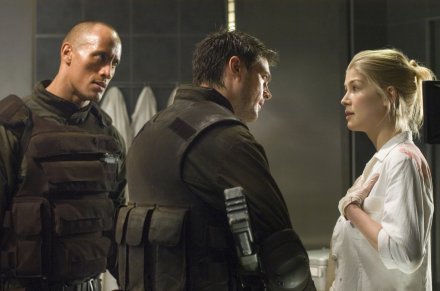 Johnson, Urban, and Pike put their heads together

After the majority of the supporting cast falls victim to a variety of ghoulish deaths, the fate of Earth is left in the hands of Sarge and brother/sister tandem John and Samantha Grimm (Karl Urban – The Bourne Supremacy, The Lord of the Rings; Rosamund Pike, Die Another Day, Pride & Prejudice). Here, the film does take a leap and elevates Grimm, who had clearly been a secondary character to Sarge throughout the story, into the hero’s role while turning Sarge into the villain. This was an entertaining and unexpected twist, as Doom was certainly being touted as The Rock’s movie. It says something about Johnson that he put Urban over in such a big way, and it shows in the appreciation Urban has for his co-star.

“The Rock really knows his stuff,” Urban says in an interview found on Ugo.com. “For a guy who hasn’t really been making films for that long, he’s a bright cookie and a very quick study. I was very impressed by how quickly he has picked up the technical elements and aspects of filmmaking.”

Johnson has a pretty easy role to play in that he’s one-dimensional. Even when he turns from bad to good, he goes from flat-out good guy to complete heel — skipping all shades of grey in between. He’s completely believable as the tough-as-nails chief that would have the devotion of his crew, but doesn’t have as much time to play up the villain role. It would have been nice to see Johnson have some more fun as the heel, but all he really gets to do is engage in a “god-mode” laboratory scrap with Urban — an ending less than inventive or pulsating.

Overall, the film is a sadly average effort that will likely fail to satisfy video game fans while doubly failing to capture a new audience.