VANCOUVER, BC – After much anticipation, the Supergirls finally had their night to shine. Two nights, actually.

The new West Coast promotion held its first shows in Surrey and Vancouver and both nights the shows were well-attended and the action was fast and frantic. If some of the fans had come with doubt about the ability of the women on the Supergirls roster, those doubts were very clearly erased by the end of the night. 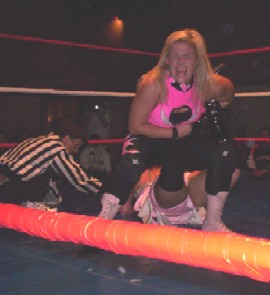 Nattie Neidhart lays in the sharpshooter. Photos by Fred Johns

Local fans had had the opportunity to see some of these girls before, though not all of them and then only on a wrestling card dominated by the males. And due to the very nature of those shows, the women’s matches never really stood out. It was a question on the minds of many of these fans whether or not the women’s wrestling could compete with that of the men.

That question was definitively answered Friday night at Bridgeview Hall in Surrey. Not only did the girls show up with interesting and innovative characters, they showed up with the moves as well. Nattie Neidhart executed a sharpshooter with perfection as her bloodline would require. Supergirls Champion Rebecca Knox took several suplexes outside of the ring and the hardcore veteran LuFisto was sent crashing through a table.

And if there was still any debate whether the women could really compete with the men, that was all ended Saturday in Vancouver when the tag team of Cheerleader Melissa and Tiffany — known as the tag team Girls Gone Wrestling — challenged male wrestlers Scotty Mac and Ladies Choice to a match. Not only did the women beat the men, but LuFisto managed to put Scotty Mac through a table at the end of that one. 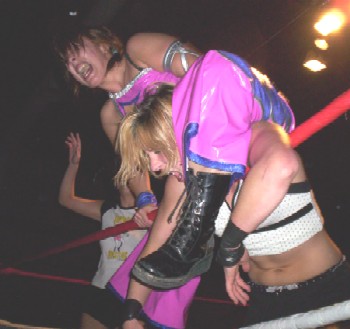 The fans loved both shows and were amazed at the athletic prowess the girls showed. “It was one of the best shows I have seen in a long time,” Rob, a long-time ECCW fan said after the Friday night show. “I didn’t expect the women to be as competitive as the men but they blew me away tonight.”

There were some first-time fans there as well. “I thought it was pretty good,” a middle-aged woman named Joy offered after the show. “That Nattie Niedhart was amazing. A lot of the girls showed me some great moves and were incredibly acrobatic. We will definitely be coming again, but next time we’ll bring the kids.”

Talk like that made Supergirls promoter Michelle Starr very happy. “I’m glad to hear people liked the shows,” he said the morning after the Vancouver show. “The girls proved they can put on a show people want to see. I’ve really got to take my hat off to the girls — they did a tremendous job. They proved to the fans that came out to see them that they can go just as hard if not harder than the guys can. All of the girls worked their asses off and when called upon they definitely performed.”

“We had ten girls booked, but only nine performed,” Starr said. (Miss Chevius wasn’t present at the shows.) “But we had two female referees as well, so that’s eleven girls for both shows. And you have to remember, Friday was the first time most of the girls had ever met each other. And when they were called to the plate, they hit home runs and more than once a night.”

A young female fan, only 14-years old, having seen the women perform at the Friday show, indicated she was now thinking about perhaps becoming a wrestler herself. “Now that I have seen it, I kinda want to do it myself,” she admitted shyly. “It was very exciting.” She likes watching the men wrestle, “but now I think I like watching the girls more.” 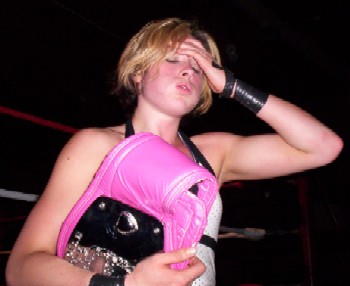 Rebecca Knox emerged from the weekend with her Supergirls title.

This was the first test for the Supergirls promotion — not just for the ladies themselves, but for their market as well. Starr confirmed, however, that while the shows did not draw as much as they had hoped, he is confident enough in the product and the girls to continue promoting the show.

The next Supergirls shows are scheduled for November 25th and 26th in Surrey and Vancouver again. There is every reason to expect these shows will be as well-attended as the first two, as one fan suggested at the end of the inaugural Supergirls weekend.

“I think the abilities of the ladies impressed a lot of people here tonight,” Byron Kerr, a self-professed expert on indy wrestling, said. “They all put a lot of effort in and you can see that. Unlike the shows with the men on them, this was a level playing field for them and they were all able to show their stuff. And the way some of them chopped each other, well, it made me hurt. These ladies enjoyed having the spotlight on them and after tonight, I think it’s clear they deserved it.”

The results from the Supergirls shows: