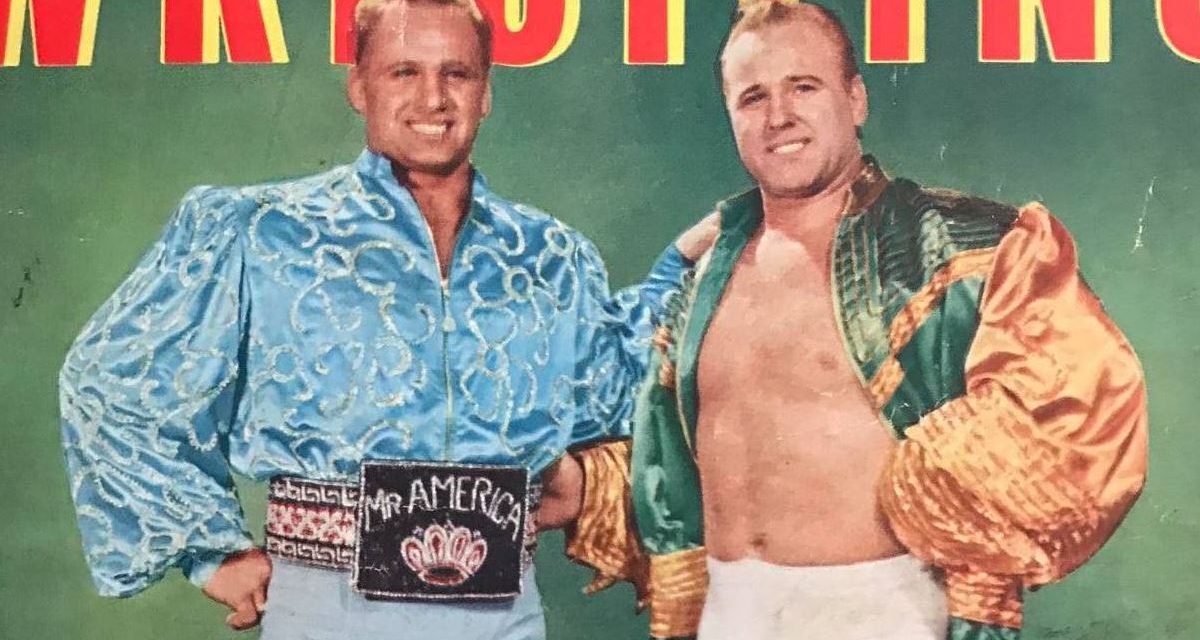 There was a time in wrestling when having a fabulous physique, expensive ring jackets and long, blond hair made one stand out. And no one stood out more than “Mr. America” Gene Stanlee.

Stanlee, who died Friday, September 23 in Los Angeles, at the age of 86, was one of the original blond main eventers. While never the greatest of the workers, he knew how to fire up a crowd, whether as a heel or a babyface. It was his battles with Antonio Rocca in the early 1950s that revived pro wrestling in New York’s Madison Square Garden after a long absence from the historic venue. 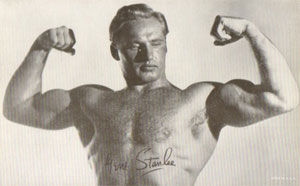 He was born Eugene Stanlee Zygowicz on January 1, 1917 in the Avondale area of Chicago to poor Polish parents Victoria and Paul Zygowicz. Gene was among the younger of his 14 siblings — eight brothers and six sisters.

At the age of five, he fell down the stairs and was paralyzed. Though given his last rites at his bedside, Gene fought back to regain his health, inspired in part by seeing a strongman at a church. When he turned eight years old, he was able to start wrestling and competing against other boys. To build his physique, Gene would collect iron from the railyard and fashion a homemade gym. Soon, young Gene was competing in bodybuilding competitions — and winning. By his own count, he claimed to have 165 bodybuilding trophies and 50 gold medals.

In World War II, he served on a U.S. Navy floating repair ship as a machinist for over three years. Upon his discharge, he was sought out by wrestling promoters, who wanted to capitalize on the publicity garnered by the “pinup boy of the Navy.”

According to historian Fred Hornby, who published a Gene Stanlee Record Book in the early 1980s, Stanlee’s first match was April 26, 1946 in Milwaukee against Leo Kirilenko. His early matches were all around the Chicago-Milwaukee area.

In an interview for the Icons of Wrestling program that aired on Canada’s Biography Channel in May, Stanlee explained his concept of showmanship. “When I walked into the ring, I would add a little showmanship to my style before I wrestled. I noticed that as I was achieving more and more showmanship, I started getting ideas. I seen that the sport was not bringing in women. So I starting glamorizing, thinking up beautiful costumes.” 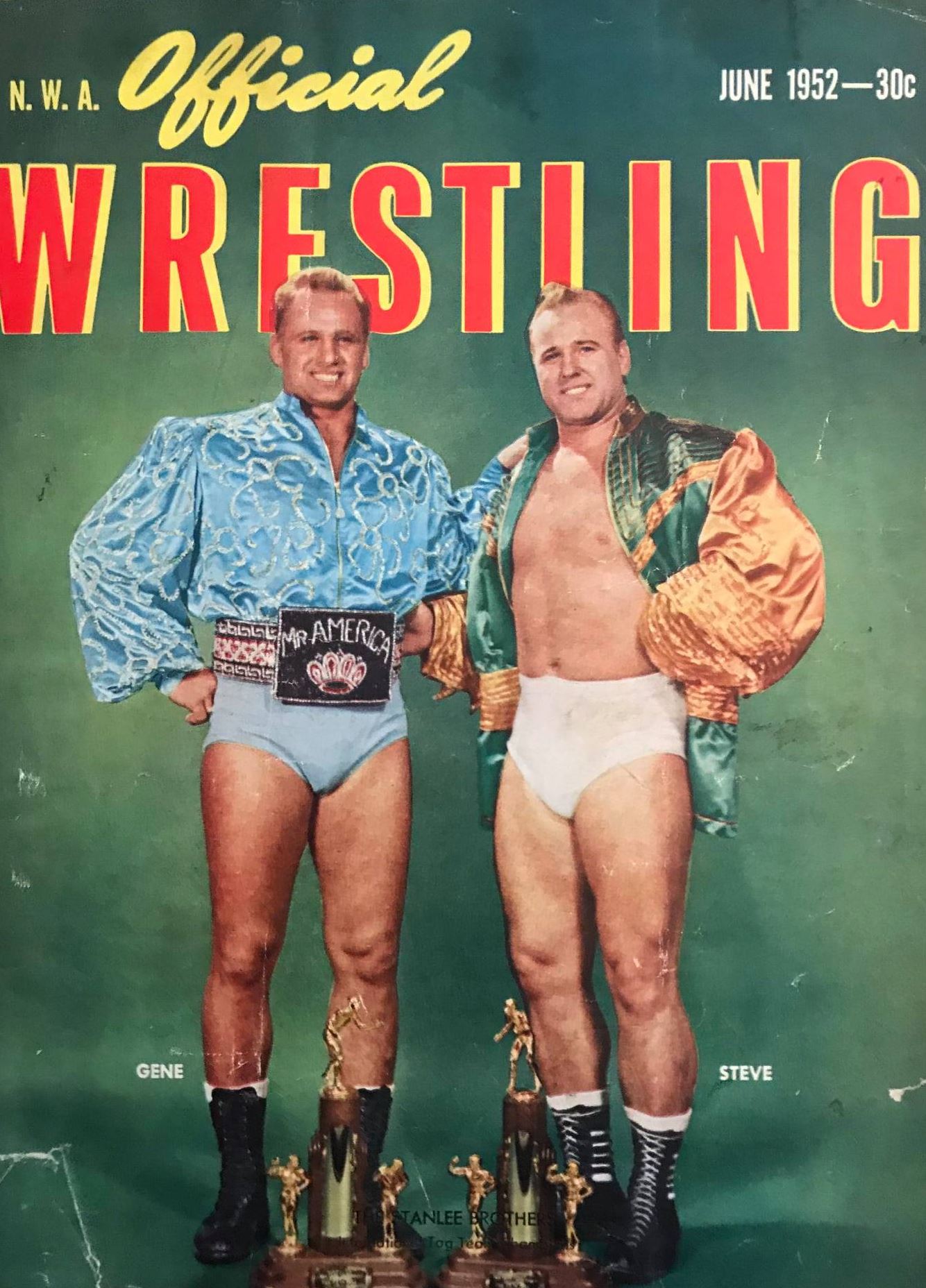 The Stanlees on the cover of NWA Official Wrestling magazine, June 1952.

In an era when a ring jacket was a novelty, Stanlee shone, and his 52 different ring jackets sparkled. He had monogrammed towels — “Wrestling’s TV King” — made up to wear once he took off the ring jacket. The elaborate entrance would serve to infuriate opponents, whether good or bad guy. The glitz would be rewarded with over 200 magazine covers during his career.

“He couldn’t wrestle worth a damn, but he had the charisma, he had the strut,” said Hornby, comparing Stanlee to the likes of “Nature Boy” Buddy Rogers and Gorgeous George.

“Gene ‘Mr. America’ Stanlee was one of my favorites as a younger boy. I think he was one of the best ‘showmen’ in the business, but I never would bet on him in a ‘shoot’ even if it was against my Aunt Tillie after we dug her up from the grave,” Ron Hill told Scott Teal’s Whatever Happened To…? newsletter in February 2000. “I saw him in a match with Guy LaRose when Guy had to put him over two straight. That was when LaRose was leaving Paul Bowser’s office and heading for Chicago where he became ‘Hans Schmidt.’ Guy didn’t like it one but, but did his job. Gene was extremely hot at that time and was selling out wherever he went.”

In a 1950 edition of The Wrestling Scene, Guy LeBow wrote up a piece on Stanlee:

Does weight-lifting tend to harm a wrestler? For a long time, wrestling enthusiasts have been unable to agree on this point. Recently, those who said that weight-lifting, by building the body, helps a wrestler, are pointing with unmuted pride at Mr. America, Gene Stanlee. Stanlee, born on Chicago’s Northwest Side 26 years ago, developed one of the most perfect physiques ever seen. When Stanlee treads through the ropes and unpeels his colorful jackets that cost upwards of $200, audiences, even watching the event at remote TV sets, sigh. His body is perfectly proportioned, and a lot of it can be credited to weight-lifting. And the weight-lifting hasn’t slowed him up or made him muscle-bound. Currently one of America’s greatest draws, Stanlee at 26 is a top sports money-maker. He’s six feet and his fighting weight is 215. Stanlee is that rare sports personality-a glamorous figure, who at the same time, wins grudging respect from wrestling enthusiasts on his grappling ability alone.

On many occasions, Gene teamed in the ring with his brother Steve. In the Icons of Wrestling documentary, Steve Stanlee shook his head while recalling their grueling regimen. “Train, train, train. We watched our diet and did our running real hard. We overdid it.”

Steve Stanlee actually started wrestling as Paul Stanlee, said Hornby. But Gene and Steve were never a serious tag team. “They did have a couple of runs together in the 1950s,” Hornby said, explaining that they “pretty much stayed apart.”

The better known Stanlee pairing was Steve Stanlee and Big Bob Stanlee (Bob Merrill, aka Giant Evans). The Ring Wrestling wrote about this Stanlee duo in May 1963. “Bob and Steve Stanlee, known as the Stanlee Steamers-‘The Mr. Americas of Wrestling,’ are a good looking tag team … Bob has had less experience than Steve, with about four years in the pro field, but he makes up for this by his knowledge and use of Judo and Karate to make the team a well balanced duo … They are currently seen in Easten rings.”

Gene Stanlee understood self-promotion, and handed out pins to his fan club members, and thousands upon thousands of Pledge of Allegiances that featured President Eisenhower alongside “Mr. America.” He naturally gravitated to the California wrestling scene for greater television exposure.

With over 50 fan clubs in his name, Stanlee credited women for making him the star that he became. “I feel that a lot that I owe is to women because they do so much for me.”

The woman in his life for the last 30 years, Erin O’Donnell Stanlee, told Icons of Wrestling that they met at a class when Stanlee was teaching physical fitness. But she was married already, and it took a while before she gave in to his romantic intentions. “I did not think of marrying Gene,” she said. “He had so many girls, it was not something you thought of.”

Capitalizing on his fame, Stanlee became a personal trainer to the stars of Hollywood, offering advice on both diet and working out from his Redondo Beach home. He obtained a degree as a Doctor of Philosophy and was an active practitioner of yoga. Stanlee would also contribute to two books, Reversing the Aging Process, and Feel Great, Be Beautiful Over 40.

At the 2000 Cauliflower Alley Banquet and Reunion in Las Vegas, Stanlee was honored by his peers. Historian J Michael Kenyon was there, and recalled the moment in an online post. “There is one, supreme memory I will cherish from the 34th annual CAC reunion banquet. One of my boyhood heroes, Gene ‘Mr. America’ Stanlee (master of health and body sculpturing) describing the wondrous benefits of dieting, fasting and exercise — and punctuating his remarks by informing the assemblage that both he and his wife, Erin O’Donnell Stanlee, had lived for thirty-one days on nothing but air!”

Dale Barnes, the man behind the Icons Of Wrestling series, recalled meeting up with Stanlee and his wife at their California home. “When I met Mr. America, I couldn’t believe the fitness of this guy for his age,” Barnes said. In fact, Stanlee still did 1000 push-ups and 1000 stomach crunches on a daily basis into his late 80s. “In his mind, he’s still a hero today, which is wonderful to see. And yet, everything he had, he wanted to flog to me, tried to sell everything. But he was a wonderful character, and his wife was a lovely, lovely lady … I thoroughly enjoyed meeting him. It was just like walking back into the past. He remembered everything, everything, which is unbelievable.”

Erin O’Donnell Stanlee was fortunate to know Stanlee in a way that fans never could. “There’s so much to him, there’s so much depth to him. There’s so much more to him than the glamour of the ring … it’s who he is within himself.”

Funeral arrangements for Gene Stanlee are unknown at this time.