To say that The Prima-Donns cable access show out of Minneapolis is kind of unconventional is like saying that Ric Flair can kind of cut a promo.

St. Paul, Minnesota book distributors Donn Wingate and Donn Searles are the hosts of this unique, off-the-wall, variety program. “It is like a three-ring circus with many recurring characters, wrestling, rock bands, and other videos, plus live guests including Baron Von Raschke, Nick Bockwinkel, Eddie Sharkey, and Jerry Lynn,” explains Wingate. 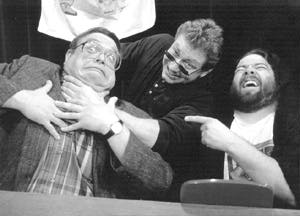 The two Donns play hyped-up character versions of themselves. Wingate is more of the arrogant heel, while Searles portrays the loveable straight man that always tries to keep the peace. The Prima-Donns begins each week with a promo by the hosts and from there the direction of the program is anyone’s guess. With sketch comedy influences from the likes of Andy Kaufman and SCTV, along with incorporating their own style of wrestling angles, The Prima-Donns turn traditional cable access television upside down. Searles and Wingate make sure to include that “the show could turn on a dime and become a respectful interview show when we have celebrity guests.”

The list of guests who have graced the program’s Minnesota Telecommunications Network (MTN) stage is as impressive as it is varied. A mixture of wrestlers, rock bands, and local politicians are the norm, discussing topical issues, performing, or even participating in some sketch storylines.

A reoccurring character and visitor in the earlier days of the show was WCW/ECW/TNA wrestler Jerry Lynn. After getting to know Lynn by being regular attendees at local PWA wrestling events in Minnesota, the two Donns had him as a major contributor to The Prima-Donns.

At times Lynn ran the video camera and also debuted a fan favourite segment named “Know Your Hold.” Looking like a legitimate tutorial session on wrestling holds, the audience soon witness the segment evolving into a hilarious skit. Whenever, the “Know Your Hold” feature came about, the poor Donn Searles was inevitably tricked into being Jerry Lynn’s partner. From there Lynn would apply a manoeuvre that would either put Searles in agony or have him pass out, much to the amusement of Wingate and Lynn. These events occurred during the second season in 1997 and the angle that followed gave the program a cult following in Minneapolis.

After a “Know Your Hold” segment, where Jerry Lynn knocked Searles out with a sleeper hold, Lynn was on the road wrestling for a few weeks. During this time Searles began taunting Lynn saying, “I have a hold for him if he ever comes back to Minneapolis.” Despite warnings from Wingate and co-creator/executive producer Mark Engebretson, Searles continued bad mouthing the then WCW star. “Well, lo and behold, we had our annual MTN Holiday Celebration and there were many people there including a guy walking around in a Jerry Lynn mask that Donn (Searles) thought was some kid. It was actually Jerry and he caught Donn by surprise, laid him cold with a vicious DDT (which Donn took and sold like a champ) signifying mine and Jerry’s heel turn,” reminisces Wingate. When asked about his overall opinion of The Prima-Donns program Jerry Lynn told SLAM! Wrestling, “it is so unique it is hard to describe. You have to experience it.”

While the sketch comedy routines are entertaining, the actual interviews with past AWA wrestling stars are incredibly informative. Baron Von Raschke, Eddie Sharkey, and Kenny Jay all gave highlight reel discussions; however, co-creators Donn Wingate, Donn Searles, and Mark Engebretson agree that one of the most fascinating guests was former AWA World Champion, Nick Bockwinkel. “To have the man himself with his great speaking voice and his intelligent views on wrestling, past and present, in the studio, what wrestling fan wouldn’t love that?” asks Wingate. Engebretson chimes in with, “Nick brought in the championship belt and a bronze cast of Andre the Giant’s hand. He is just total class from the old school of wrestling.”

Local accolades for The Prima-Donns have been plentiful. From praise in community newspapers to cable access awards, the Donns have become a bit of an institution in Minneapolis. In 1999, the program received the MTN award, and 2003 delivered the honour of best cable access show from The Weekly City Pages. “No single program has demonstrated the persistence, communal spirit, and dogged commitment to the indie ethos of cable access then this year’s winner, The Prima-Donns. Best of all, the gang behind the show always look like they’re having the time of their lives”

Premiering in January 1996, and now entering its tenth season, what is the secret to the show’s longevity? Wingate says that one of the main reasons is the commitment of all the unsung heroes behind the scenes; such as camera/lighting operator and producer Dave Potts. Including Potts, several of the volunteers have been with The Prima-Donns since day one and have taken on numerous roles to keep everything running as smoothly as possible.

Searles believes that the formula for success is that himself and Wingate have a genuinely good time on camera, drawing the audience in with their unconventional style of entertainment. “I think people see how much fun we’re having — and we really are — and stay tuned for the fun. We’ve had a ten-year long ball. There’s also a bunch of old-time wrestling fans in this neck of the woods who love to hear about wrestlers long retired”.

The Prima-Donns continue to press on being as unpredictable as ever, with no real aspiration to do the show on any forum other than cable access television. This season’s tongue and cheek slogan may sum up the light hearted nature of the program best, “10 years of excellence, 10 years of dominance, 10 years of decadence… and 10 years of really crappy mike cords that have to be spliced together with duct tape so you can even hear us.”

The Prima-Donns can be seen in Minneapolis Tuesday evenings at 10:30 p.m. on the Minnesota Telecommunications Network, and Thursday nights beginning at 10 p.m. on the St. Paul Neighborhood Network.