LONG ISLAND, NY — What do you get when you cram Jerry “The King” Lawler, Dustin Rhodes, Team 3-D, Terry Funk and over 25 other superstars into a Hilton? K and S Wrestlefest 2005! With a dream and a wealth of wrestling stars backing them up, Ken Pulvidente (K) and Steve Muraglio (S) set out to accomplish what they never thought they could.

Longtime wrestling fans, Pulvidente and Muraglio always wondered if they could bring Long Island what it so desperately craved — a wrestling convention. In June 2005, the duo began promoting Wrestlefest 2005, which at the time had eight names appearing. Three months and 30 stars later, K and S Wrestlefest had arrived. 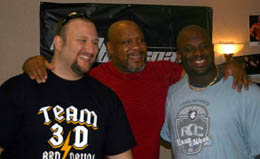 The Dudleys and Tony Atlas. Photos by Chris Sokol

“I think we did everything possible to promote the show. We put out over 3,000 flyers, we put up over 400 posters, we ran three commercials during Raw on Spike TV,” Muraglio told SLAM! Wrestling.

But promotion is only part of the puzzle when it comes to running a convention.

On the Friday night before the show, Pulvidente was running around to area independent shows and autograph signings, while Muraglio picked up all the talent that flew in. From there, everyone met up at the Huntington Hilton to make final preparations for the morning’s show.

At 8:00 a.m. sharp the doors opened and fans were let into the vendor area, which was packed top to bottom throughout two rooms and a hallway. Wrestling promotions, NWA Cyberspace and Piledriver Professional Wrestling were both on hand, as well as TNA stars Bobby Roode, “Primetime” Elix Skipper, Tracy Brooks, “The Man Beast” Rhino, “The Outlaw” Kip James and The Naturals. Andrew “Test” Martin, Greg “The Hammer” Valentine and BG James were amongst other names that appeared to sign autographs. “I think we had a lot of good vendors there. From the ones I spoke to, I heard that they did financially well and in the end most of them seemed happy,” Muraglio said.

During midday, there was a break in the action and the fans were drawn to check out a “Special Show” that was going on in the vendor area. Former TNA Star, Sinn, was performing his routine which consisted of him bending a metal bar with his hands and mouth, breaking a dog food can with just one finger and having female Indy star, Talia, throw three darts into his back. “It was something different, and it couldn’t have came off any better. The fans loved it,” said Pulvidente, whose idea it was to have Sinn perform. 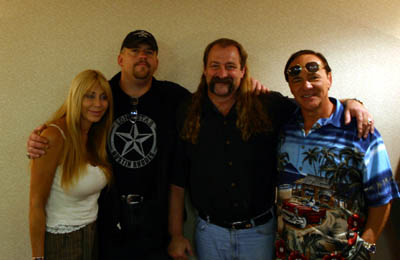 The first autograph session took place between 9:30 a.m. – 11:30 a.m., featuring Terry Funk, Missy Hyatt, Dustin Rhodes, “Mr. USA” Tony Atlas, “The Living Legend” Larry Zbyszko and Bobby “The Brain” Heenan. “I think this session ran pretty smoothly. Fans had a chance to talk to the legends. I received an email from a fan by the name of Mario, and he expressed to me how much he appreciated not being rushed through the autograph line, as he had at previous conventions,” Muraglio stated.

From there, a panel of stars was set up for a Q & A Session from 11:30 a.m. – 1:00 p.m. “The first Q & A went well. The fans seemed kind of shy, but the questions that were asked, were answered. Plus, we got to see the real heat between Bobby ‘The Brain’ Heenan and Missy Hyatt explode,” said Muraglio. That heat came about when Bobby Heenan talked about women not belonging in the professional wrestling business; Hyatt took exception to the comment and the sparks flew.

At 1:00 p.m., Hyatt, Zbyszko, Atlas, Funk and Lawler traveled into another room to have lunch with fans who had purchased a ticket to eat with the stars. The five stars did not disappoint the fans in attendance, telling tons of stories while they ate, including the time where Zbyszko flew his plane through a cloud with Tony Atlas, pretending that the engine was dead and that they were going to crash. Muraglio hyped the ‘what if’ situation: “For those fans who didn’t go to the lunch, they missed a great opportunity that they should have taken advantage of.”

The afternoon autograph session consisted of Team 3D (BRD and Devon, aka the Dudleys), Little S.D. (Spike Dudley), The Midnight Express (Bobby Eaton and Dennis Condrey), Magnum T.A., Jerry Lawler, Paul Bearer and Nikita Koloff. “Again, the fans were not rushed through, we gave them time to speak with each star. Afterwards, I was approached by more fans who thanked us for not rushing them,” said Muraglio.

The day closed out with a final Q & A Session with the second autograph panel, plus “Luscious” Johnny Valiant. Right off the bat, Lawler was asked the hard-hitting questions as it pertained to the current WWE product. Team 3D was asked about their heat with New Jack to which they responded that they were with him at the Hardcore Homecoming show, and he was quite apologetic. Paul Bearer spoke of how he would not return at Wrestlemania XX, due to weighing over 520 pounds. WWE signed him and paid for his gastric bypass surgery as a signing bonus. They used him until he needed emergency gall bladder surgery. Bearer later found out that his release was most likely due to Vince McMahon’s concern for his condition. The company continued to pay Bearer until July 2005. Bearer finished up by saying that he could not say anything bad about a company that saved his life. On the opposite end of the spectrum, Little S.D. (Spike Dudley) used choice wording to describe his feelings toward WWE. Muraglio was pleased with the way things turned out. “The fans did seem to sit on their hands again, but everything turned out good. There were a couple of incidents in this session that made it interesting to say the least.”

Reflecting back on their first attempt as promoters, Pulvidente and Muraglio found the task to be both physically and emotionally draining. The constant hustle and awareness that is needed to control an event of this magnitude is almost insurmountable. “I think if you were a fan you enjoyed this show. I thank all the fans that came out and supported us, we tried to do something great and something different,” Pulvidente said. “Right now, we will be taking a nice long rest, but don’t be surprised if K and S Wrestlefest 2006 heads your way!”