As TNA Impact gets set to make its debut on Spike TV this Saturday, everyone in the company is getting set for the landmark event, including the company’s “franchise” personality.

Shane Douglas will be among the familiar faces that fans will be seeing on the U.S.-based network, which kicks off its new deal on October 1. 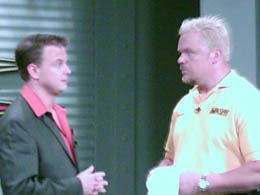 In an interview with SLAM! Wrestling in early September, the Franchise said that there is a lot of excitement throughout the ranks of TNA over the debut. “The anticipation is huge on all fronts,” Douglas said. “We at TNA are totally stoked that we have finally reached the national spotlight our stars deserve. We are so thrilled to be associated with a network like Spike that knows and appreciates what our product (exciting, athletic, well-written, and well-executed professional wrestling) brings to the table and, most importantly, to their viewers.”

As excited as Douglas is for TNA’s debut from an emotional standpoint, he is just as eager to see the numbers the show will draw. Douglas believes the Nielsen numbers will be high, based on their action and support from Spike’s other fight programming. “I personally look for a strong showing in the ratings with the debut,” Douglas said. “Then, and this is extremely important in the TV world, I do believe we will keep our viewers both from our lead-in (UFC) and from our debut shows. That’s the first measure of success TV execs will look for early on.”

Douglas, as many fans will recall, has worked in all four of the “major leagues” in wrestling. His career is highlighted by tenures with World Wrestling Entertainment, World Championship Wrestling and Extreme Championship Wrestling, where he was the company’s first World Heavyweight Champion. Douglas quickly became part of TNA when it debuted more than threee years ago, returning to the National Wrestling Alliance.

Recently, Douglas has not been wrestling in the six-sided TNA ring; instead, he’s taken a position behind the microphone and behind the pen. He is not ruling out a return to the mat for the Nashville-based organization. “I believe my role in TNA will continue to be what it has been — as the backstage interviewer, agent, human relations and, eventually, as promoter of live events for TNA,” Douglas said before addressing a query about a ring return.

“As for your question about will the Franchise be returning to the ring,” Douglas added. “Well, have you seen the disrespect Samoa Joe has been showing me in my attempts to get some comments from him? You can ask Vinnie Mac how I respond to being disrespected. That said, Samoa Joe is a ‘hoss’, a ‘stud’, a ‘beast’; and I’d have to be nuts to go back into the ring to face him. However, I have been working my ass off in the gym recently, getting back in shape, so who knows what the future will bring in TNA. Tune into Spike Saturday nights at 11:00 pm to see what happens.”