ORLANDO, FL. — With TNA’s debut on Spike TV set for this Saturday, October 1st, SLAM! Wrestling headed down to Florida for the taping of the inaugural shows and had a chance to talk to a number of people in the company before, during and after the show.

Mike Tenay is part of the company’s management team in addition to his on-air commentary role. At a recent Border City Wrestling card that showcased TNA matches — including one that saw Jeff Jarrett regain the NWA World Heavyweight Championship from Raven — Tenay expressed his optimism about the future direction of TNA. 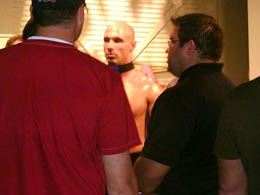 “It’s been quite a three-year ride for anyone who’s been with TNA from the outset. We’ve had some pretty high peaks and some pretty low valleys during that time. All of a sudden, you can feel a lot of things are coming together in so many ways,” Tenay told SLAM! Wrestling. “Without question, the greatest opportunity for us will come on October 1st. Not only are we excited about being part of the national TV scene in the United States, but also to get that exposure in Canada as well. For TNA, right now, this is our biggest chance.”

The management team arrived shortly before 11 a.m. for the taping. Before the doors opened at 6:30 that evening, there was plenty of work to do. The bookers, including Tenay, Scott D’Amore, Dutch Mantel and Terry Taylor were up to the late hours the night before, going through pre-taped video packages promoting the show and the upcoming pay-per-view, and making last minute arrangements and changes to the ordering of the matches.

The next morning, the team headed to Studio 21 at the Universal Studios lot, just a short drive away from the hotel. Some went into the production office, while others headed towards the studio itself where the arena is being made up. 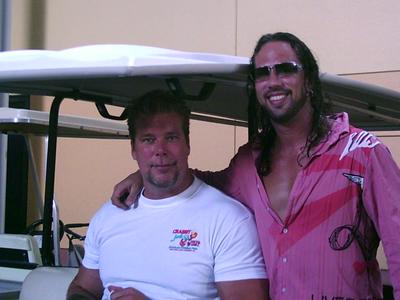 The production team, led by Don Harris (yes, that Don Harris, known to wrestling fans as one half of the Harris Brothers, aka the Blu Brothers) has transformed an empty building into a full-fledged wrestling arena. Two entrance ramps have been set up, so that the good guys and bad guys can come out on separate sides. Lasers and lights are tested and re-tested, sound and camera guys drill holes and run cables. There’s plenty to do with only six hours left before showtime.

“The set was already good a year ago,” The Franchise said, “but it’s been upgraded so much more for Spike TV. Even people who’ve seen Impact before will turn it on and think it’s an entirely new set. I think the set is going to help the show get the slick, well-produced look that Spike is known for.”

Douglas is very interested in the production side of things. “When I was younger, I never thought about how things were done. I figured I get to the building, and the ring’s set up, and I go out there and they turn on a camera, and that was it, plain and simple. From the side I’m seeing now, I see that there’s so much more to it than that. From the planning and the execution, and the post-production to get a television show ready for airing, that’s a whole new ballgame for me.”

Most of the wrestlers arrive by 1 p.m., and head to the catering area for lunch. Lunch is held outside the studio building, not far from the infamous area where TNA held a “welcome” party for WWE when they were doing some filming there several months ago. The tables are lined with veterans and youngsters alike, swapping stories about injuries and opponents, road stories, and challenge each other as to who can eat the most cookies.

In that forum, nobody talks about how excited they are about the taping, but one can tell that the feelings are there. There’s a nervous excitement building, particularly when company founders Jeff and Jerry Jarrett pass by the tables with representatives from Spike TV. 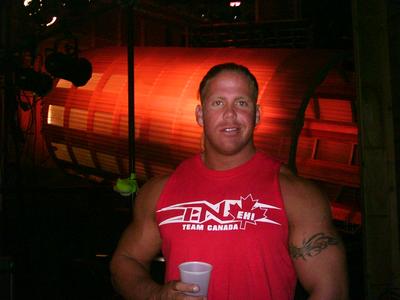 The Phenomenal A.J. Styles has already been selected as the first TNA wrestler who will appear on Spike TV. And even though he has seen and done it all in the company, the pressure that this poses is not lost on him.

“For me to be the first guy that (viewers) see, that is a huge honour for me. I’m excited about having the chance to go out there and set the tone,” Styles said. Though he looks at this like just another major step for the company towards bigger and better things, not unlike when the company taped its first monthly pay-per-view, he confessed that he does indeed have some nervous anxiety about performing tonight. “Yeah, the butterflies are erupting right now. This is a huge, huge thing. This is another highlight in my career, but I don’t think it will be the last. We’re going to get bigger and bigger.”

After lunch, the pre-taped promos are filmed. The wrestlers put on their game-faces, hyping up the next PPV and the Spike TV Saturday Night package, as agents and writers and production crew discuss the next one with whoever is waiting on deck.

Bill Banks is one of the TV writers who have helped flesh out many of the promos. His resume in the industry is impressive, having written TV shows for both WWE and WCW in the past, so his take on the TNA-Spike deal is particularly meaningful.

“This is huge for us,” Banks said proudly. “This is everything we’ve worked for from the first day. All the naysayers said we wouldn’t be able to do it, that a second national promotion would never work. But here we are.”

Having a wealth of experience in the TV game, Banks is keenly aware of the importance for a wrestling company of having a supportive network behind them. His view on Spike TV is that they are exactly that. “Spike TV has gotten behind us like we’ve never imagined. For example, we were originally scheduled to do four preview spots (to air on Saturday night during the Ultimate Fighter marathon). As of last night, they added seven more. So starting at 6 p.m. on Saturday night, they’re going to be airing two of our promotional spots every hour until we debut. That’s the kind of commitment Spike TV is making; we couldn’t have asked for anything more.”

With an hour left before the doors open to the fans, the atmosphere backstage is one of nervous excitement. The production staff tour the redesigned studio one more time. Wrestlers receive last-minute instructions on where to go for promotional pictures. Some warm up in the parking lot behind the production office. Conversations become more focused, the tones and expressions a tad more serious than they have been all day.

Slowly, the realization hits them that this is real. What each and every one of them has worked for, is happening now. And when they go out there, it’s not just another match, another show. This is the next bold step into the company’s future.

Perhaps Samoa Joe put it best: “Everyone here is going to go out there and do whatever they can to prove that they’re the best at what they do. That will come out every time people turn on TNA programming. And that’s pretty exciting.”

During the taping, the entire locker room sits backstage and watches the show on the monitor. Some pace back and forth, waiting for their cue to hit the ramp and head to the ring, others do some calisthenics or stretches to limber up before their matches. Others just watch the action, noting every reaction from the crowd, seeing what works and what could work better, cringing with every spot that you know has just gotta hurt the guys in the ring, and passing their own critiques between one another around what they’re watching.

After the participants return from the ring, they seek out the opinions of the agents about how things went. The production team sit at another table, studying the video of the events that just occurred, reviewing things from different angles in order to ensure it will come across on TV as well as it did in front of the live crowd.

After the last match concludes, the backstage area clears out pretty quickly. People are exhausted and anxious to get to their hotels, or to celebrate the events of the day at a nearby restaurant. Wrestlers exchange handshakes and hugs before they go their separate ways. All of them seem satisfied with the way things went down, some overtly so, as they congratulate one another with handshakes and hugs.

The production team labours away, but you can tell by their tired eyes that they too are ready to wrap up for the day, and pick up tomorrow what they have left to do.

Among them, the representatives from Spike TV are thanking everyone involved. It is clear from their reactions that they are overjoyed with the tapings, and their decision to sign the deal with TNA. They seek out Dixie Carter and Jerry Jarrett to thank them and congratulate them on this moment of triumph.

Brian Diamond, Vice President of Spike TV in charge of Sports and Specials sums up the results of the day.

“It was amazing,” Diamond declared. “We had met with (TNA management) after the last pay-per-view and we talked a great deal about what they were going to do for the debut, and we are thrilled at what we saw. As part of the Slammin’ Saturday Night programming, we want to deliver action, action, action. I think that tonight, they delivered 1000%.”

While it’s still too early on to tell if wrestling fans can expect another full-fledged promotional war, if TNA can keep delivering the type of product that was showcased at their first taping, and if Spike TV continues promoting the show like a flagship program, there’s no reason why the company won’t be a strong viable player on the national scene for years to come.

“Bloodthirsty” Bob Kapur would like to send a shout-out to his Blackberry for its help in compiling this piece, even while on the plane ride home to Mississauga.