Lots to be excited about for Samoa Joe

The month of October is going to be a good one for California’s Samoa Joe. In addition to TNA Impact debuting on Spike TV, Joe has a few huge matches lined up that may result in fans simply dubbing him “Joezilla.”

“I have pretty much resigned myself that my purpose in life in October is to beat up Japanese people,” Samoa Joe, who faces Kobashi and Jushin “Thunder” Liger in October, told Wrestletalk Radio this week. “At first I was worried because I enjoy the country of Japan and its fine, fine people. I am game, ready to be there to kick ass and take names.”

First up is NOAH’s Kobashi, who faces Joe in Ring of Honor (ROH) one on one Saturday night in Manhattan, and teams with Low Ki against Homicide and Kobashi Saturday night. “I’m excited. From all indications from the NOAH office, Kobashi is really excited and wants to make a big debut in the States and felt that I was the best opponent to showcase our skills.”

The tag showcase features a lot of history, as Joe has recently feuded with the Rotteweiler’s Low Ki and Homicide, yet they are facing each other and Joe is teaming with Ki, a long-time enemy, for the tag match. 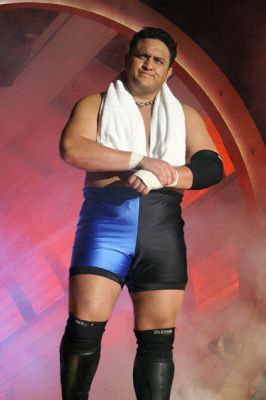 “The people who sign my paycheque told me to team with Ki. It’s the type of match up that has four of the best in the world in the ring, it’s a match for the fans. ROH is not above throwing things out the window and just saying ‘Let’s put on a great match for the people.’ They felt that that group of four people would produce something special, and we are definitely looking to [do so].”

Then on October 23 at TNA’s “Bound for Glory” pay per view he faces Jushin “Thunder” Liger. The two teamed at Ring of Honor’s “Weekend of Thunder” event in 2004 and Joe is looking forward to the first time singles match.

“Teaming with Liger last year was a lot of fun. We had spent the previous week together and ran a wrestling clinic in Los Angeles. At Bound for Glory, it will be a treat. I am lined up against some of the best wrestlers in history this month and I am excited to have the opportunity to go out and do something great. What Liger and I produce in the ring fans are going to love.”

The match cements that Samoa Joe has made the right decision in choosing to go to TNA. Mick Foley had pushed for WWE to sign him, but Joe felt that the Nashville-based promotion would be a better fit.

“TNA had extreme interest in using me, came to the table with ideas and were excited about me coming in. So far it has worked and the fans of TNA and the office have responded pretty positively. It doesn’t take a rocket scientist to figure out that Samoa Joe and what WWE expects from their wrestlers doesn’t match up.”

Surprisingly to some there hasn’t been a backlash against ROH talent like Joe, Austin Aries and Roderick Strong signing with the company. There was some bad blood from ROH fans when the promotion pulled TNA contracted talent from the company.

“Fans have had a complete 180 turn in their perception of TNA. I think having crossover talent is great for both companies. We had a show in Boston for Ring of Honor and there were a lot of TNA watchers at the show. TNA initially really viewed ROH as a small-time, backwater outfit out of Philly. It was a half-assed assumed look at ROH, while in reality ROH has some of the best wrestlers in the world. After my initial entry into TNA there was worry because of the perception of ROH that ‘We know you guys work a couple of times a month’ when ROH’s schedule is as busy if not more so than TNA’s and they were afraid I was going to murder everybody. Then I had a few matches and they said ‘Wow you’re a pretty good wrestler.’ After the Chris Sabin match and going into the AJ Styles match they found they were wrong about ROH wrestlers. I think past regimes in TNA turned their noses up at ROH and the current regime looks at Ring of Honor as a promotion with great seasoned wrestlers that can give the company their moneys worth. It speaks to Gabe Sapolsky’s ability to seek out talent and put them with other talent to learn that ROH talent is doing so well. When I went to TNA, ROH fans were happy because TNA is letting the ROH guys do their thing and giving us enough time to entertain fans the way that we know how. Bad blood between fans and the promotions is water under the bridge.”

Many fans have heard of Samoa Joe but never seen him in action. They will get their chance Saturday nights starting this week, as TNA Impact will air on Spike TV. Joe is eager to show his unique style to a larger audience.

“I am really excited about being on Spike. There aren’t a lot of opportunities to do what you do on national TV in this industry today. Having Spike behind TNA and getting ready for Impact and an alternative product it is exciting to be part of that. Even though I wasn’t there for the foundation of TNA, it is fun to be with the company in this stage of taking that big step. I hope my addition to the company helps push that through and make it better. My style isn’t pretty, it’s very rough and in your face and what I think and believe pro wrestling should look like. I am not a flashy wrestler, I do simple things with a lot of impact. I would rather punch somebody in the face then figure out another way to do a sit out double backhanded pumphandle deathdriver.”

While Joe has chosen to stay on the independent circuit, something that working for TNA allows him to do, others have signed with WWE, including CM Punk and former WWE stars Jamie “Noble” Gibson and Brian “Spanky” Kendrick, both of whom left the company last year.

“They made a decision based on what was right for them. Jamie has a wife and kid he needs to support, and what you lack in creative input you make up for financially with WWE. Even though indy work is prolific at that level and you can make a comfortable living, there are no guarantees. If you get hurt you don’t work, don’t get paid and your kid’s not eating. I empathize and understand why they went there. I am going to miss having Jamie in the locker room, he is one of the highlights and Spanky is the same. It sucks that I won’t be able to work with them on a regular basis, Spanky has been my friend forever and Jamie has become a great friend in his brief time in ROH. Punk had a lot of positive feedback in dark matches and backstage promos before he went to WWE. He is in OVW with Paul Heyman right now and Paul E. is really high on him.”

While Joe’s career is far from over and new doors are opening for him internationally, one of the highlights of his career will be his 21-month reign as ROH world champion from March 2003 to December 2004, when he lost the strap to Austin Aries. Fans still talk about the match in reverent tones. It was the culmination of a year of hard work from everyone in ROH.

“2004 was one of the roughest years I have had professionally, we worked for this company we loved with all of our hearts. When all the stuff went down with [ROH honcho] Rob [Feinstein], it struck us to the core. A lot of us battened down and decided to make the quality of our work overshadow what was going on behind the scenes, and we accomplished that. When I lost the belt to Aries, it was the right time and time for the company to grow and create new stars and focal points, and we have done that successfully. Aries was the right guy and I am happy with that. It was one of the most memorable move sequences and nights of my life and an honor to be part of that.”

From the early days of UPW with long road trips for no money to headlining TNA pay per views, Joe has truly broken out and succeeded. The key to success is hard work, and Joe is glad to pass on advice to those who are looking to break out themselves.

“You can’t wait around for someone to give you your break and hope that word will spread and someone will need you. You have to find the opportunities and when you get them, capitalize on them and be aggressive. If you want to do this for a living and call this your profession, you have to work harder at it than anything else in your entire life. If you have the ability and potential to be a draw then you will be successful, but you have to think of pro wrestling as a business instead of something you like to do. I aggressively went out and made connections and found out where I needed to be to get work, in whose eyes did I need to be seen to start pulling in more money. Once I started to get established with companies like Zero-one and Ring of Honor, it was a matter of making sure it was worth their money to pay me to do what I did. It’s not about fairness, this is anything but a fair business, and it’s not about how many people on the Internet love you. It’s about you delivering when companies hire you to come in and do shows for them. If you can consistently deliver for companies to the point they are ecstatic to hand you your paycheque at the end of the night, you’re destined to succeed in this business.”