Women’s wrestling is about to get a much-needed shot in the arm: Extreme Canadian Championship Wrestling (ECCW) promoter Michelle Starr is getting set to launch The Supergirls of Wrestling, an all-girls wrestling promotion set to put women’s wrestling back on the map.

Sure, there’s women’s wrestling in the WWE and local shows have even been known to run the occasional woman’s match. But these seem to be few and far between and as female wrestler Charlotte Webb says, it’s time for a change. 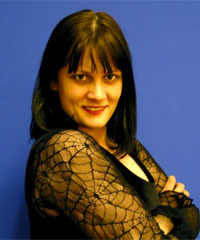 “I think having an all girls promotion is really good for us because most of the time we are the ‘gimmick match’,” Webb says. “Because talent is not always that important as far as women are concerned, some women don’t try as hard as the men. But on an all-girl card, we will all have to work harder to stand out. Just being a girl who can wrestle a match on the guys’ card is not going to cut it at an all-girl show.”

Starr (Mark Vellios) believes the girls can do just as well as the guys, but until Supergirls, they didn’t really have much of an opportunity to prove this. “There are a lot of really great girl wrestlers out there,” he says. “But a lot of times those that do get into wrestling don’t stick with it as long as the guys do because they don’t have the opportunity to wrestle as much and therefore don’t have the chance to improve. The guys we use on ECCW shows are all so good because of all the chances they have had to wrestle — hopefully now we can offer the same opportunities to the girls.”

The Supergirls promotion is clearly their best chance to date. The promotion, which is holding its first show September 23rd in Surrey, British Columbia, will be exactly what it is being billed as: an all-girls show, where the men are the valets and managers and the girls are the superstars.

“It’s a complete role reversal,” Starr says of Supergirls. “There might be the odd male match — an inter-gender match or mixed tag situation, but it’s the girls that will steal the show.” Starr says we can expect great characters, good storylines and some very competitive action. “We’re going to have some hardcore, extreme stuff like in ECCW, barbed wire stuff but also some very good wrestling.”

It’s important for Starr to emphasize this point as women wrestlers tend to be looked upon as nothing but eye candy, an inevitability he admits has to be expected whenever women are working inside a wrestling ring. “To be honest, a lot of fans are going to be more concerned with how the girls look than how the girls wrestle. Attractive girls are a selling feature, no doubt. But we want girls who are attractive and talented. Once the fans see how good these girls can wrestle, they’ll come back again.”

And there are attractive girls on the Supergirls roster — a lot of them. But each brings with them something above and beyond the perfect physique and raw sex appeal. Take Nattie Neidhart, for example. Not only is she a beautiful athlete, she’s also the granddaughter of Canadian wrestling legend Stu Hart and the daughter of Jim “The Anvil” Neidhart.

“Canada is known for producing some of the top male wrestlers in the world, including my uncles Bret Hart, Owen Hart and Davey Boy Smith,” she remarks when asked for her views on the relevance of Supergirls. “If Supergirls is successful, it gives a chance for female talent to shine and really prove themselves. That is what we need — a platform to display our abilities.”

Neidhart says she is proud to be the first third-generation female wrestler in the world, but she doesn’t think this makes her anything special when it comes to Supergirls. “I don’t think that I am greater or lesser than any of the girls on this tour, because we are all unique in our own way,” she says. “I am proud to be involved in the show where so many reputable and hardworking women are able to display their talent in the ring. There are so many girls involved in this promotion that I am so excited to work with. Maybe some of these girls will be a part of the movement to help revolutionize this sport for women.”

LuFisto, another of the Supergirls, has earned the nickname “the First Lady of Hardcore.” She has a different style than Nattie Neidhart, but has some similar thoughts on the potential of the new promotion.

“To me, the Supergirls division represents a good way to promote women’s wrestling in a respectful way and a way to showcase wrestling at its purest,” LuFisto says. “It is very hard these days to build a strong women division with all the T&A that is involved today. However, Supergirls seems to be focusing on the wrestling itself and that’s why I’m looking forward to it. I really hope this division will bring back what women’s wrestling should be — a pure sport and entertainment performances based on talent, efforts and sacrifices.”

The first two Supergirls shows are planned for September 23rd (in Surrey, BC at Bridgeview Hall, 11475 126 A. St.) and September 24th (in Vancouver, BC at Russian Centre, 2114 W. 4th Ave at Arbutus). Scheduled for the first two shows are Supergirls Champion Rebecca Knox from Ireland, Nattie Neidhart from Stampede Wrestling in Calgary, Cheerleader Melissa from APW in San Francisco, Belle Lovitz from Stampede Wrestling in Calgary, LuFisto from Montreal, Samantha Slides from Monster Pro Wrestling in Edmonton, Charlote Webb and Miss Chevious from ECCW.

There is another one planned tentatively for some time in November, and possible plans to branch the Supergirls to Toronto and down in the United States. “In Canada, nobody else is doing this,” Starr says of Supergirls. But the success of the promotion — and the subsequent frequency it runs it shows — all comes down to how well the talent does in its inaugural offerings.

“We want to test it out and get a good demo tape made and send it out to fairs and professional events all over the country,” Starr explains. “If a fair in Toronto wants Supergirls wrestling, we’ll bring the Supergirls to them.”

For many of the Supergirls, there is a lot of travelling involved. They come from places like Ireland, Montreal, and Alberta just to name a few. Coming to Vancouver, for example, can mean spending a fair penny on travel costs, but Starr says the trip represents another opportunity the girls will find it hard to pass up.

“A lot of the girls dream of going to Japan,” he says, “and Vancouver is a good stopover and a great gateway to the Pacific Rim. It’s a wise move for the lady wrestlers and once things get rolling here and some of the girls start getting more work, some of the girls that can relocate, probably will.”

Charlotte Webb certainly believes Supergirls is a win-win situation. “I think out of all of the ladies in the division, I am the one who will learn the most from her experiences at the shows,” the B.C.-based grappler says. “Every new lady I wrestle teaches me something new.”

She says she’ll likely learn a lot for Supergirls, and that all the girls can only benefit. After all, it’s the first time in recent memory that the women involved in the Canadian independent circuit have had the chance to showcase their skills on such a wide and open platform. For many of the girls, Webb thinks, Supergirls is exactly what many of the talented women involved in indy wrestling have been waiting for a for a long time.