The obituaries for the recently-departed Lord Alfred Hayes mentioned that he had started wrestling under the moniker ‘Judo’ Al Hayes. However, historians know that Hayes wasn’t the only ‘Judo Al’ to make a name for himself in wrestling. Indeed, a fellow Brit — Al Marquette — also used that name throughout the 1960s and 1970s, competing in over 3,000 bouts. Marquette has documented his story in Two Falls, Two Submissions, or a Knockout.

The book, released in 2004, offers extensive details about all of the major stars from the British wrestling scene from the time. Marquette documents the most famous and infamous gimmicks and characters from the scene, and for each, provides some comments about their background, career highlights, and personal reflections from his matches against them. 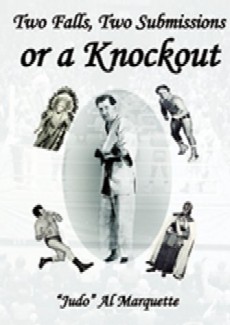 The wrestlers were a real mixed bag with many highly-gimmicked characters and others who were more “pure” athletes. Marquette describes them all, including Billy Robinson who might be England’s most famous wrestler, to Ricky Starr, the flamboyant star who wrestled in ballet shoes, Canada’s own Billy Two Rivers, and countless others who thrilled the crowds who packed the Royal Albert Hall and other famous venues back in the golden age of wrestling.

Some of wrestling’s most famous modern gimmicks seem to have their roots grounded in the English scene. For example, a character called The Snake Man used to bring a snake with him to the ring — clearly a precursor to Jake “the Snake” Roberts. People who have heard of the “hunchback” character that was proposed, but never used in WCW might be surprised to learn that it wouldn’t have necessarily been a failure — indeed, Marquette describes a wrestler named Quasimodo whose success had a lot to do with his opponents’ inability to hold his shoulders down to the mat because of his mighty hump. There was even a feared wrestler named “The Undertaker” whose entrance included a funeral march, and who would try to put his opponent into a casket after he’d beaten them. While the book may be a good resource for historians, it will probably not be as interesting for casual fans. Rather than giving the reader an honest and revealing peek behind the curtain, Marquette clings to the concept of “kayfabe.” In that regard, he describes his matches as if he was really fighting for his life, as opposed to acknowledging the scripted nature of the outcomes. While this may be understandable, given the era Marquette came up in, it seems quite out of place in today’s environment, and will certainly put off readers who are looking for something more forthright. In addition, it’s not particularly inexpensive, for less than 200 pages of text, it’s arguably not the greatest value for your money.

For keen students of the game, the stories and numerous pictures contained in Two Falls, Two Submissions or a Knockout will be great reading. But for everyone else, I suggest you might want to leave this one on the shelf.