CHARLOTTE — If Bret Hart didn’t precisely know the first query that would be directed at him Sunday afternoon, it’s clear that he had a pretty strong inkling. 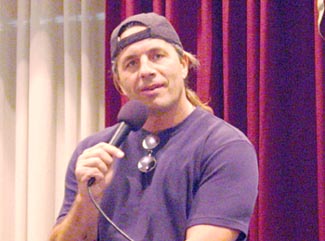 Would Hart answer a few questions at a fan forum, hop in a limo, race down I-77 to a waiting jet at Charlotte Douglas International Airport, fly to Washington, D.C. and make a grand return to the WWE at SummerSlam?

From the tone of Hart’s give-and-take with fans at the NWA Legends Fanfest here, it is equally clear that the mere hint that he might have pulled that stunt is a fundamental misreading of what Hart thinks about his career and the direction of his life.

Though Shawn Michaels and Hulk Hogan needled Hart for weeks before their SummerSlam main event, and the WWE appeared teased fans about a possible encore by the “Hitman,” the storyline wasn’t done with his permission, Hart told about 150 fans.

“I think it’s some kind of an attempt to use my name or my situation to promote their own angle. Neither Shawn Michaels nor Hulk Hogan are friends of mine and neither one is sympathetic to me, so it must be a case of two people that can’t make it on their own, so they have to throw my name in there.”

Hart said he’ll continue to work with the WWE to produce a DVD about his career — he expects to put the final touches on it this week for a November release. But with the infamous double cross by Michaels at the 1997 Survivor Series still in his memory lock box, that’s as far as the good will extends.

“I have compromised some of my feelings toward the WWF. I think we have come far enough. I think they accept that were a bunch of lousy bastards about it, and I accept that they were,” he said.

Hart’s appearance Sunday attracted a strong walk-up crowd of WWE-regaled fans not normally seen at NWA-styled events. Some waited for nearly two hours for an autograph from Hart, who was seated on a dais with former stars such as Greg Valentine, Ken Patera, Dick Slater and Baron Von Raschke.

The crush pushed back his question-and-answer session by an hour, shortening it to 60 minutes from a scheduled two hours.

Perched on a chair, wearing a baseball cap backwards, Hart fielded questions in an unemotional tone, letting his words carry the day, with none of the histrionics that marked forums with former NWA champion Terry Funk or manager Jim Cornette earlier in the weekend.

Much of the hour predictably revolved around the 1997 Survivor Series, when WWE owner Vince McMahon, Michaels and other conspired to strip Hart of his title in an unplanned match finish. Captured on film in Wrestling With Shadows, a documentary about Hart, the contest has attained almost mythic status.

The double cross still irks Hart, in large part because Michaels refused just weeks before the match to ensure that he would work with, not against, his rival in the ring. That’s a violation of basic principles of wrestling, Hart said.

That’s why Hart said he refused to lost the title to Michaels. In one moment of hilarity, he said he told McMahon he would even lose to the Brooklyn Brawler, a long-time opening bout loser, rather than Michaels.

As to Michaels’ ally Triple H, “he is just a phony, lying piece of shit,” Hart said to a crescendo of applause. “He was part of the whole thing and he was there swearing to God like Shawn, swearing to God that they had nothing to do with [the double cross]. If you watch the documentary, you see them for the lying pieces of shit that they are. 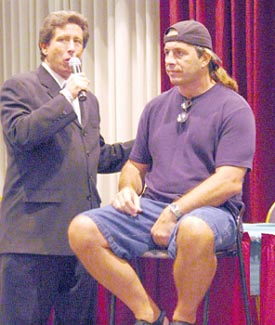 “The difference between me and Shawn Michaels and Hunter Helmsley is if they come to me that day and they say, ‘Look, we want you to screw Shawn, and we want you to do this,’ I wouldn’t have done it. I’m not going to screw up another guy. Not now, not then.”

That’s why Hart blames Michaels more than McMahon, whom he said was acting as the tough-minded businessman that he is. “You can say what you want about Vince McMahon, but he was the best … He was a genius at creating stories for the wrestlers.”

In retrospect, Hart said his problems with the WWE, and especially Michaels, started at WrestleMania X, when McMahon sent his idea for a ladder match to Michaels and Razor Ramon. Hart said he had tried for a year to get McMahon to buy into the concept, going so far as to wrestle Michaels in a demonstration ladder match at a small show.

“They stole my idea. It was grand theft. I wished that I could have had some great ladder matches with some people,” he said. “It pissed me off. It was the first backstabbing kind of thing that Shawn did with me.”

Hart said he prefers to remember his classic, no-gimmicks bout with brother Owen on the same card. “They’ll never steal my thunder with Owen at WrestleMania X.”

The Iron Man match against Michaels at WrestleMania XII also foreshadowed the events in Montreal, Hart said. The company sent him to work overseas and paired him with slow-moving wrestlers like Yokozuna and The Undertaker so that he wouldn’t be prepared to go a full hour with a well-conditioned Michaels, Hart charged.

“I didn’t get to do a lot of cardio,” Hart said. “They wanted to set me up. [Announcer] Jim Ross wanted to be on the microphone at the 45-minute mark, talking about how Shawn is picking me off the mat.”

But Hart said he trained “like crazy” right before the match, and considers it a good match because the two men were trying to outwork each other. “That was a tough, long day at the office,” he said.

Even in the weeks before Survivor Series, Hart said he got into a “little catfight” in a dressing room with Michaels, slinging him around “by what little hair he had.”

Returning to the present, Hart feels the Montreal “screw job” hurt the WWE in the long run because it deprived the group of his expertise. He felt he eventually would wind up in the front office, handling bookings and storylines, and working with young wrestlers to hone their performances.

“When they screwed me in Montreal, they lost all of that, and that’s part of I paid, but it’s also part of the price they paid. I’m never going to give them what I have.” But he would be willing to help TNA in the same capacity, he added.

In other matters, Hart acknowledged that he was “no stranger to steroids” when he started to get his first championship push in 1992. His rise to the top of the singles division from a tag-team star came when McMahon was on trial for steroid-related offenses, and the WWE wanted stars to look free of physique-enhancing drugs.

But he said he was “not dependent” on them, and worked without them as one of the smallest, but most skilled, champions in WWE history. In fact, he also reserved sharp words for Ric Flair, the hometown Charlotte hero from whom he snatched the world title.

After Flair failed to follow McMahon’s directions about a match with Randy Savage, the WWE owner sent the two to the ring for a remake, he recalled.

“They just said, ‘This guy’s the pits,'” Hart said, echoing a criticism also leveled by Ole Anderson. “Ric Flair had the same match with Big Bubba as he has with Chris Benoit, upside down into the turnbuckle, running down the side … Ric Flair couldn’t do anything but a Ric Flair match.”

In contrast, Hart felt he could work a variety of different styles and believed wrestling was “a better business” because of his contributions.

“I’m surprised. I found out since I’ve been here everybody hates Flair more than I did,” he cracked.

As to the future of wrestling, he put in a good word for nephew Harry Smith. “I think in 10 years from now, he’ll be world champion, or maybe less. He ought to be anyway.” Hart also said he is impressed with TNA star A.J. Styles, who was in attendance Sunday.

Hart said he would consider accepting enshrinement in the WWE Hall of Fame, and is eyeing the DVD’s success as a gauge of his relationship with the federation. “It’s not there yet. It’s still floating around in my mind. We’ll see soon enough,” he said.

Hotel officials estimated weekend attendance at about 700 fans, the strongest since 1,200 gathered at promoter Greg Price’s inaugural Charlotte-based fan festival in January 2004. Price said he might hold his next fanfest in the metropolitan Washington, D.C. area sometime next summer.