NEWTON, Iowa – On a steamy hot day, with too many people stuffed into a tiny room dominated by a pint-sized wrestling ring, the George Tragos/Lou Thesz Professional Wrestling Hall of Fame grew by six members Saturday.

The induction ceremony was presided over by the International Wrestling Hall of Fame and Museum boss Mike Chapman, who has been writing about wrestling for 40 years and written 16 books. 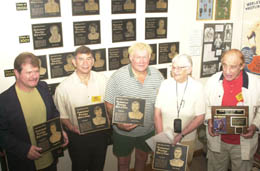 “Wrestling is our universal sport,” Chapman proclaimed, pointing out that it’s wrestling that is mentioned in the Bible, not soccer or baseball. He proudly introduced each inductee.

The “Nebraska Tiger Man” John Pesek (1896-1978) was inducted, and the award was accepted by his daughter Mary Lee Pesek. “I know my father would be very proud,” she said. Later, when someone’s cell phone rang in the crowded room, Chapman quipped that it was Lou Thesz dialling in from the heavens to congratulate his old friend Pesek.

The induction for Canadian wrestling great Earl McCready was accepted by the great Danny Hodge, already a Tragos/Thesz Hall of Fame member. “He’d done everything that we’d done and then some,” said Hodge.

Dr. Bill Miller was inducted, with his last ring jacket present, thanks to historian Jim Melby. His award was accepted by family friend Percival Al Friend. “He would be so, so proud of the entire turnout we have here today,” said Friend.

Antonio Inoki, unable to attend because of a conflicting New Japan Pro Wrestling show overseas, had one of his North American liaisons, Brad Rheingans, accept the award on his behalf. “He has truly been an icon in professional wrestling,” said Rheingans. “He’s legendary, he’s mythical, he’s been a great person to for 21 years.” Rheingans closed by thanking the Hall in Japanese.

Jerry Brisco was very moved to accept his induction plaque, joining his brother Jack in the Hall of Fame. “I was overwhelmed and I am still overwhelmed,” he said, beginning to break up. “It’s such a great honour to be here with these great stars.”

Harley Race said that it would certainly have made his father laugh back in 1959 to have even the thought of such a Hall of Fame honour being considered. He said that the feelings he was experiencing were “unreal” and that it was a true honour to be among the “absolute best of the best.”

Last, but certainly not lacking for words, was the 2005 Frank Gotch Award winner for his contributions to wrestling, “Judo” Gene LeBell. Chapman took great glee in poking fun at LeBell on occasion during the ceremony. On the fabled Muhammad Ali-Antonio Inoki non-finish of a fight from 1976, Chapman joked that “if they had had a decent referee it might have been a different finish.” The referee for that bout? LeBell. Chapman’s plan for the Bill Miller ring jacket? “We’ll hang it over the Gene LeBell display.”

LeBell, a veteran stunt man as well as wrestling and judo star, wasn’t one to take himself too seriously anyway. Looking up at the previous inductees, he joked that he had lost to them all and that he wanted to be in a room where nobody had beaten him. He recalled learning the ropes at a young age from Ed “Strangler” Lewis. “Wrestling since then has been my life,” he said. LeBell also gave praise to the late Lou Thesz, who he considered his mentor. “Lou showed me more finishing moves than any of my teachers,” said LeBell. “He was as good as he wanted to be.”

Saturday night, the festivities continue to a banquet further honouring the inductees.