Legends come out in Newton 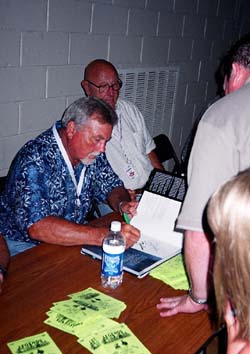 Tom Andrews signs an autograph in Newton Friday night. Bob Geigel is behind him. Photo by Greg Oliver

“There’s tons of pressure,” said Darin Waid, 20, who worked in the opening match of the five-bout show at the Newton High School. “All these guys have been doing this longer than I’ve been alive. It’s an honor to go out there and wrestle for them.”

In attendance at the ‘Night of Legends’ event put on by Harley Race and his World League Wrestling were Mad Dog Vachon, Larry “The Axe” Hennig, Baron von Raschke, Fritz von Goering, Brad Rheingans, Jerry Brisco, Paul “Mr. Wonderful” Orndorff, Tom Andrews (aka an Intern, The Claw), Bob Geigel, Tom Drake, Percival A. Friend, and Danny Hodge. The show was a fundraiser / promotional event for the George Tragos/Lou Thesz Professional Wrestling Hall of Fame, which has its induction ceremony on Saturday.

By far, the most “over” oldtimer was Race, who got a couple of standing ovations during the evening, and just before the main event, asked the hot crowd if they wanted him to bring WLW back again next year. The response was an overwhelming yes from the 400 or so in attendance.

Daniel Cross (Daniel Palmer), 19, tried to just concentrate on his match rather than the legends on hand, especially Brisco, who still has a behind-the-scenes job with WWE. “There’s added pressure … bigger than your average show, though maybe not crowd-wise,” he said.

“Superstar” Steve, 27, is a veteran on the WLW circuit now, and has done 13 trips to Japan for NOAH. He didn’t need a speech from his mentor Race to psyche himself up before the show. Having the legends in attendance was enough. “It inspires me to do so much,” he said.

Like the crowd, Race’s wrestlers were very appreciative of the eight-time world champion. “There’s no better guy to have train you,” said Cross. “Harley’s forgotten more than most people know.”

Sitting on the sidelines, signing autographs on everything from ticket stubs to posters to t-shirts, Andrews was appreciative that some fans still remember him, despite working most of his career under a mask. There was a twinge of regret in not being able to climb in the ring yet again to have a crack at entertaining the crowd. “It brings back memories,” Andrews said. “If I was about 25 years old, I’d want to be back in there.”

Here are the results from the show Friday night: