It has been said that the 1980s were a golden era for tag team wrestling in North America.

With teams like the Hart Foundation, the British Bulldogs, the Fabulous Freebirds, the Rock and Roll Express and The Midnight Express, tandem wrestling across the industry was hotter than it had ever had been or likely ever will be; and while these and other teams certainly laid their claims to wrestling immortality, there were non greater that the Road Warriors.

If you don’t agree with that above statement, chances are you will after viewing WWE’s latest bio compilation, Road Warriors: The Life and Death of the Most Dominant Tag-Team in Wrestling History. This DVD has been a strong seller so far, and could rank up with Ric Flair’s three-discer as one of the top sellers in WWE. 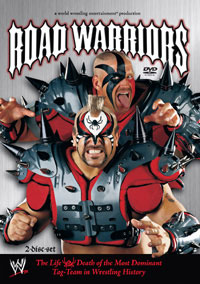 The two-disc set, as is becoming traditional for WWE, includes a documentary and extras. The documentary is a very strong look at the Warriors, primarily through Animal’s eyes, starting with the team’s childhood beginnings in Chicago and Minnesota, all the way up to Hawk’s passing.

Along the way we hear stories from Paul Ellering, Michael Hayes, Jim Cornette, Barry Darsow (aka Smash) and others about the Road Warriors in and outside the ring. Included are the origins of both the Road Warriors and Legion of Doom monikers, the latter of which was a larger stable that eventually got whittled down to Hawk, Animal and Ellering. There is also a lot of time spent on LOD 2000 and Droz, who we find out was a welcome addition to the Road Warriors.

While the documentary is extremely thorough in telling the full Road Warriors story, there are a couple of glaring omissions. While Ellering talks about coming into WWE, there’s no mention as to why he wasn’t brought in with Hawk and Animal in the first place. We also don’t hear anything about Rocko, which would have been an interesting commentary, to say the least.

The extras are a mixed bag of interviews and matches. All three of the Road Warriors WWE Tag Team Title wins are included, as are classic and rare bouts with the Hart Foundation, the Midnight Express and the Fabulous Freebirds, footage from the Crockett Cup tournament and other memorable moments. There is also a very obscure match with LOD squaring off against Hulk Hogan and Genichiro Tenryu, which, despite becoming a schmoz very quickly, is an entertaining watch.

The biggest disappointment in the matches, however, is the included bout with Demolition. The match, from WWE Challenge, pitted Hawk and Animal against Smash and Crush. While Ax was already having health problems by the time the Road Warriors arrived to WWE, there were some better bouts with him involved, including a wicked six-man tag match with Demolition against LOD and the Ultimate Warrior from Saturday Night’s Main Event. The match, which was referenced in the documentary, should have been included instead of this 1.5 out of 10-rated garbage bout.

Along with matches, there are some other cool features in this set. There are a variety of killer promos offered up, showcasing LOD’s intensity and humour. Along with these clips, there are other features such as a tour of Animal’s Road Warrior tribute room in his house, segments from Confidential following Hawk’s death and some imspirational quotes from Hayes and Ellering.

Picking up this DVD shouldn’t even require a second thought. Serving as an education in tag-team wrestling, Road Warriors: The Life and Death of the Most Dominant Tag-Team in Wrestling History is a must-have for fans of all ages.