On June 19th, 2005 fans who attended TNA’s Slammiversary pay-per-view wondered who would walk out of the “King of the Mountain” match for the NWA title. In a surprise twist, Raven replaced Jeff Jarrett in the match and emerged with the belt.

“It was pretty cool. I have been in this business so long I am jaded and cynical, and this is validation that the company has that kind of belief and faith in me,” the new champion told Wrestletalk Radio Sunday. “I think if I am not wearing the belt it needs to be on Jeff or AJ Styles. I don’t think anyone has stepped up to the plate to be the kind of performer that will be in the main event picture. I think someday Monty Brown will. Just because you feel like you deserve something doesn’t mean you will get it. I and a lot of people felt I was misused in WWF but that doesn’t negate the fact that I never proved that I was as good as I thought I was. This is a validation.”

It is Raven’s first world title since his runs as ECW champion in 1996 and 1997. When asked to compare the titles, Raven responded in typical style.

“They are different colors,” he quipped, before adding, “(they are) two different belts in two different eras. I don’t know if you can compare the two. They were talking about which belt was more valuable and important on my website. This one is more important to me right now and worth more. The ECW title was my first World title so they are both equally great. If you really think about it the ECW belt was the NWA belt because Shane Douglas took the belt and threw it down and declared ECW.”

Raven’s first PPV title defense is this Sunday at No Surrender against Abyss in a dog-collar match that can only end via pinfall. 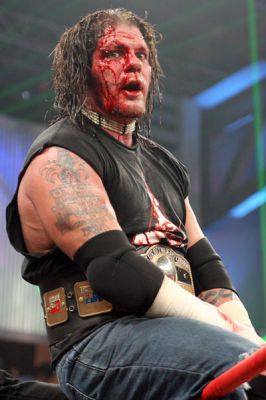 Raven after winning the NWA title at Slammiversary. Courtesy TNA

“It should be a hell of a match. If you think me and Sean Waltman had a great match (at Hard Justice) this will be even better. The stipulations make it interesting, with the dog collar and chain and the fact that you can’t tap out you have to be pinned. I can beat on Abyss until Jim Mitchell wants to throw in the towel but it won’t make a difference if he does. I am a bleeder, so I would predict some blood.”

Raven’s title win comes on the heels of a win over longtime foe The Sandman at Hardcore Homecoming on June 10.

“Honestly, part of the lustre was gone because I went back to the ECW arena for CZW so I had already been back,” he said. “Going back to that building and having the same fans there, walking out and having the fans chant ‘Thank You Raven’ for five minutes was a great feeling. It wasn’t the same to me. Oscar Wilde said you can’t go home again and he is right. Hardcore Homecoming was fun but it didn’t hit me the way it did everyone else. It was partly because Paul E. (Heyman) and (Tommy) Dreamer weren’t there. ECW without Paul E or Dreamer is like ECW without Sandman or Raven. It was a lot of fun but for the match to be good I had to turn myself heel. I couldn’t just soak in the fans I had to crap on them. The match wasn’t our best, the building was hot as balls, the locker room wasn’t the same it was small and cramped. It was cool but it wasn’t like, ‘oh my god I am back.’ It was more Sabu, Terry Funk and Shane’s night.”

In addition to wrestling, Raven has also taken on the role of mentor and teacher. He is quick to give advice and lend an ear to any up and comer who wants help.

“I like to teach for two reasons. One, it is good for the ego, purely selfish reasons. Two is that I want to pass on my knowledge,” Raven said. “I don’t want the business to turn into a bunch of guys who have no concept of what they are doing. Somebody who was a nobody, who was trained by a nobody, trains most guys. They aren’t learning from a star. There are people who fall through the cracks but if a trainer has never been anywhere he probably isn’t very good. Even if you don’t make it to the top of the card, you will still make it somewhere. I remember at Larry Sharpe’s school Charlie Fulton was training and he worked all the time and a hell of a worker. Years later I went back and had Jungle Jim, who was a nice guy, training people. He isn’t qualified to train people. If they were good enough they wouldn’t still be at the school. Anyone can teach you the moves but that isn’t wrestling, it’s what you do between the moves is wrestling. Indy guys think it is all about the moves and the more the better, they don’t get as good of a reaction as they could have if they had done it right. People think I have a problem with indy workers or cruiserweights, I don’t. I have a thing against people who don’t know how to sell or refuse to sell, especially because it is the most democratic skill in the business. It is the only one anyone can do without athleticism. It is the single most important skill and unfortunately the single most overlooked skill. Selling doesn’t begin and end when you are down, you shouldn’t stop until you are back in the locker room. I am doing a series of videotapes for Ring of Honor called ‘Secrets of the Ring.’ I really wish people would get them so they can learn how to work.”

A big part of what Raven preaches and instructs is how to make wrestling mean something, a skill that is lacking in many wrestlers today in his opinion.

“It is all about emotion. Today’s generation doesn’t get it. They think it is all about highspots and athleticism. That is the least important part, wrestling is about drama. The big money drawers like Dusty Rhodes, Hulk Hogan, and Bruiser Brody weren’t technical workers. There is a reason why the Tyler Fullington angle with Sandman or the Dreamer feud are remembered over other storylines is because they resonated on an emotional level. For example, the “chairshot heard round the world”. The original plan was to hit me ten times with the chair. I said we weren’t doing it. I said one shot that I sell like I am dead will mean more then 35 shots. Dreamer argued that everyone was taking three or four shots on the show. I replied that it didn’t matter what everyone else does, all that matters is what we do. No one is going to go, ‘wait a minute; that guy took three shots and he only took one he shouldn’t be hurt.’ That isn’t the way people view wrestling and people to this day don’t realize that. If you engage the audience on an emotional level all they are going to see and remember is what you are doing. I took that one shot, Dreamer hit the pose and the place went nuts. It never would have stood the test of time if I took more then one.”

Raven’s career has taken him through ECW, two runs with WCW and the WWF and now TNA and the independent circuit. Often a tortured soul in character and reality, Raven has finally found happiness.

“Honestly, I am probably happiest in TNA because I am happiest with me as a person. I have faced most of my demons, financially I am making more money then I ever was, I am happier as a person and my life is more together.”