Meltzer follows through with Tributes II

As with any sequel, it’s impossible to completely separate it from its original. Was it better or worse? In the case of Wrestling Observer editor Dave Meltzer’s second book of obituaries of wrestling legends, it’s a little of both.

The writing and the research for Tributes II: Remembering More of the World’s Greatest Professional Wrestlers is top notch, as always with Meltzer. He recounts the wrestling careers of greats like Lou Thesz and Wahoo McDaniel like he was there with them throughout their adventures. The best one of the 15 biographies, for me, was Freddie Blassie, with its stories of crazy antics both in the ring and away from it. 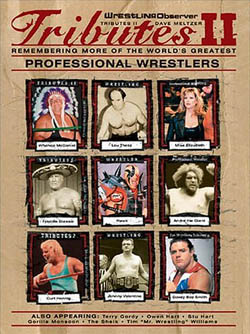 In many cases, Meltzer brings others in to help tell the tales, top stars like Superstar Billy Graham, Pedro Morales, Dory Funk Jr., The Destroyer (Dick Beyer) and John Tolos. It would have been nice to have even more, but, knowing that these pieces were originally written for his weekly newsletter deadline, it’s understandable why there aren’t more.

It’s too bad that the pieces couldn’t have been a little bit more complete, though. Death dates and causes of death are not always in the stories, and could have been added in a subtle manner without compromising the original works. I’d also like to know more about their family lives. But then again, the title of the book is Tributes, not Obituaries, and Meltzer definitely pays homage to the greats — Owen Hart, Blassie, Davey Boy Smith, Curt Hennig, Andre the Giant, The Sheik, Stu Hart, Gorilla Monsoon, Johnny Valentine, Road Warrior Hawk, McDaniel, “Mr. Wrestling” Tim Woods, Terry Gordy, Elizabeth and Thesz.

Bret “Hitman” Hart provided the Foreword for the book, and it’s amusing and informative, explaining how Meltzer’s Wrestling Observer began to get accepted through the years in the industry.

The demise of publisher of Tributes I, Stewart House, prompted the need for a new company that saw wisdom in publishing wrestling books. Enter Sports Publishing, L.L.C., which has also done Bobby Heenan’s sequel and has upcoming autobiographies from Harley Race, Terry Funk and Dusty Rhodes.

This change alone meant a new editor, and new vision for what the book should be like. It also meant that some inconsistencies come into play.

The biographies of Andre The Giant and Owen Hart appear in both Tributes I and II, which is all well and good for sales, perhaps, but an annoyance to someone who owns both books. (But boy, is the new book’s cover better — imagine that, putting photos of the people who are IN the book on the cover rather than an empty ring.)

The photo selection in the sequel isn’t as varied as in the first book, and there aren’t as many. We are given four photos of Lou Thesz, and in all of them, he is more than 50 years old, and two of them look like they were from the same photo shoot. The André the Giant photos are blurry and seem chosen for who he is in the frame with (Hulk Hogan, Dory Funk Jr., Ken Patera), rather than for being a great shot of The Giant.

There is also no index this time around, a flaw that hopefully Sports Publishing can correct for the Race, Funk and Rhodes books.

On the plus side, however, Sports Publishing has an enthusiasm for DVDs with its “Beyond The Book” concept. The one-hour DVD of Meltzer talking about the personalities in Tributes II is pretty good, and adds a depth and a new perspective to the book.

Regardless of its pluses and minuses, Tributes II: Remembering More of the World’s Greatest Professional Wrestlers will be an often-referred-to reference on this writer’s bookshelf.