Hamilton’s Chuck Molnar, who died peacefully on Saturday at age 72, is an excellent example of somebody who lived his dream of wrestling for a short while, before moving on to another life.

In the 1950s, he started working out at the Hamilton Y with former British Empire champion Jimmy ‘Red’ Simms. 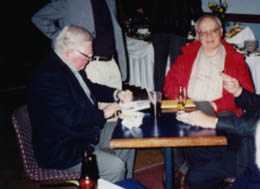 Chuck Molnar (red jacket) at the book launch for The Pro Wrestling Hall of Fame: The Canadians. — Meredith Renwick

A few years back, he explained the Hamilton pro wrestling connection, why so many wrestlers came out of the southern Ontario steeltown. “[The] construction and steel plants produced an environment of tough young men who needed an outlet to prove to themselves that they were capable of progressing physically beyond their workplace and workplace, and wrestling became their outlet,” Molnar said.

“It was no large decision as Hamilton was always a ‘hotbed’ of wrestling. Like myself, the faces that I saw at the weekly wrestling events became the same faces that I encountered coming out of these gyms. I suppose we all shared the same dream, and that was to become one of those stars of the mat that we wanted to emulate.”

After training with fellow Hamiltonians Danno O’Shocker (Jack Lloyd) and John Yachetti (The Beast), he did the odd shot for promoter Joe Maitch around southern Ontario. Molnar got his first break under promoter Jack Pfefer in Toledo, Ohio at age 20. He wrestled under the name Barry Levin there. It was there that he also latched onto Gorgeous Gus, the wrestling bear. So for the next couple of years, Molnar and Jerry Graham travelled around from territory to territory with their wrestling bear. Graham rarely wrestled the bear on the road, instead it fell to locals to face Gorgeous Gus — or Molnar.

Molnar explained to newsletter Whatever Happened to … how he got involved with the bear:

“Billy Fox owned the bear. He and his wife took it around on the road for about two years, previously … Fox told me and Jerry, ‘Why don’t you two come out and wrestle the bear. Maybe you’ll like him and maybe you’ll buy him … take him on the road.’ We went out and were standing in one end of the place. Fox said, ‘Now, put your tights on, because the bear looks for tights.’ He said, ‘I’ll go to the other end, get the bear ready, and I’ll bring him in. All of a sudden, this door at the other end opens. We look and, here’s this huge animal lumbering in. Billy’s holding the chain behind him. He had bad eyesight, so he walked about twenty feet without seeing us. When he did see us, he took off and ran at us like a horse. I was so bloody scared that I couldn’t run if I wanted to. My feet were planted there. The funny thing was, he jumped Jerry first. It was like a buzzsaw. All I could hear was Jerry screaming, ‘Jump him! Jump him!’ Our fear finally left, and we switched back and forth for about five minutes … a half minute on, a half minute off. All of a sudden, the bear got tired. Jerry and I got tired. We sat on the floor. The bear sat on the floor with his tongue hanging out. The bear was out of shape. We were out of shape. We decided we really liked it, so we bought it from him. That’s how we got stared.”

After the bear died, Molnar went to Nashville, and then to Atlanta, where Graham had gotten another bear. In Atlanta he was billed as Pierre DeGaulle.

Molnar’s career lasted a little longer than five years. He decided to call it quits and settled down to marry his wife Helen Lenert. Molnar went back to school, night school and then McMaster University for English Literature for a year. Following his wrestling career, he re-started his musical career as a violinist, and also worked as an electrician. He was with the Hamilton Symphony for two years, and with his string quartet, Molnar got to see more of the world than with wrestling.

“I had seen some of the wannabes cry because they either weren’t big enough, tough enough, good enough to get into the pro ranks. I don’t remember working at anything so hard as I did at getting to the pros. With one exception, the violin,” he said.

Over the last number of years, Molnar enjoyed surfing the Internet and re-visiting his wrestling memories, attending Dean Silverstone’s reunion of wrestlers in Seattle, and the book launch for The Pro Wrestling Hall of Fame: The Canadians by Greg Oliver in Niagara Falls in 2003.

He is survived by his wife Helen, his daughter Charlene and her husband Jim Conte, his son Randy and his wife Wendy, and children Jacquie, Jay and Quincy, as well as his sister Mary Acs and her family. A Service of Remembrance will be held from the funeral chapel of Hetherington & Deans, 5176 Victoria Ave. in Niagara Falls, Ontario on Thursday, November 11, 2004, at 1:30 PM. The family is asking for contributions to Heart Niagara in Charles’ memory.