How Holek became Lisowski then Neilson

A part of two of the most infamous “brother” tag teams — the Lisowski and the Neilsons — Stan Holek actually started in pro wrestling because of his real brother Laddie.

Turns out that the two kids from a farm 12 miles out of Chatham were both athletes. Laddie, who is 3-1/2 years older than Stan, got into the business in Detroit and found his way onto TV. “That was in the early days, when TV started,” Stan Holek recalled for SLAM! Wrestling. “I could see him on TV and I said, ‘Heck, I can get into that.’ I always enjoyed a scrap once in a while.” 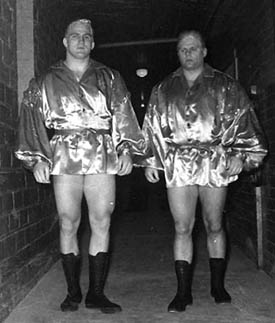 In the end, Laddie only wrestled about two years, and he got out to become a successful businessman in Windsor, but Stan’s career would last much longer.

Debuting in 1951 at age 18 after training with Bert Rubi, The Sheik and Larry Shane in Detroit, Holek’s first big break would be teaming with Reggie Lisowski as the Lisowski Brothers. (Reggie Lisowski would gain greater fame as The Crusher.)

It was the second step in an only-in-wrestling triangle: Reggie Lisowski had a great team with Art Neilson; when Art and Reggie split up, Stan came in as Stan Lisowski; when Stan and Reggie broke up, Art Neilson made Stan his “brother” in the Neilsons.

Despite the successful runs on top as a Lisowski and a Neilson in the 1950s, Holek said that he never struck it rich. “There wasn’t a lot of money in those days. Expenses ate you up for one thing,” he said. “You were maintaining three places: You had a family, and you wouldn’t be taking them with you all the time; you had a place for them; Then you had your own place, a home base; Then on the road, you were in hotels and motels. So it’s like maintaining three places as your living quarters.”

He was Stan Lutze in New England, around Boston, in the 1950s. “How I got that name, well someone said I look like an old-time wrestler by the name of Lutze. That’s the reason they wanted me to wrestle under that name.”

In 1960, he did his one and only tour of Japan. “That was enough. I didn’t mind it, it was a good place to be, but I just wanted to be in a country where I could walk in a place and order a hamburger.”

An American citizen for about 50 years, Holek considered pro wrestling a job as opposed to something he dreamed of doing. He did what the promoters told him to do. His real was always to be a cowboy, and he managed that, first in Hawaii as Cowboy Elliott Hardy.

Settling in California in 1960, he started looking at other work. He learned to bulldog and worked the rodeo for about 13 years. Today, Holek lives in a remote part of northern Nevada. “I’m out of the jungle, out here with elbow room. I go to town, it’s 60 miles. Come back, every time I go to town, it’s 120 miles round trip.”

In Nevada, he worked a number of years at a gold mine, using the machines to hunt for microscopic gold. He claimed it was the best job he ever had.

Holek been with his second wife for 33 years now and has two daughters but no grandkids yet. He keeps pretty busy. “I’m the type of guy, I get out all the time. I’m just not much for sitting in the house,” he said.

In fact, the day he was contacted by SLAM! Wrestling, the 71-year-old Holek had been out helping a friend with a ranch brand 80 head of cattle. “I’ll be honest about it. I’ve been retired for seven years, and I haven’t had a day off since. I often wonder how I ever found time to work.”