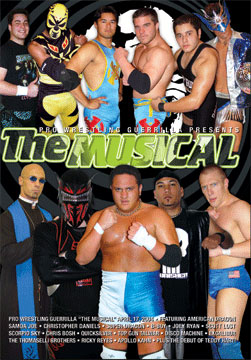 Comrades in arms, a revolution is at hand. I, Commander Corey, of the People’s Independent Wrestling Revolution (PIWR) have been tasked with leading the masses to new fronts for pro wrestling action. These are dark times for wrestling fans everywhere, oppressed by the current junta of sports entertainment tyranny.

But there are those who refuse to conform and instead, charge forth with fresh, intelligent and awe inspiring wrestling. I will continue to seek out such groups and present them to you with the hope that you will embrace their cause.

Our intelligence cell here in the PIWR recently submitted to me an excellent wrestling product, produced by southern California based Pro Wrestling Guerrilla (PWG). The DVD is entitled PWG The Musical and I assure you, there is plenty of bold in-ring theatrics to be had.

Inside the ring is the faction of Chris Bosh, Charles Mercury, Quicksilver, Scorpio Sky and Top Gun Talwar. Bosh proceeds to communicate a diverse string of vulgarities to the crowd and thus, establishes himself as Mr. Potty Mouth for PWG. Sky takes the mic and confesses to having some doubts about his current feud with his arch nemesis, Super Dragon. Talwar, with chalk board scraping voice, is incensed and demands an act of allegiance from Sky. Talwar states that Sky will face none other than… Kane! However, as Kane is a no show (and under contract with the WWE), Sky will instead face Disco Machine.

Talwar starts off against Tornado, whose outfit brings back long lost memories of the curtains that were hanging in my parents’ home back in ’79. Tornado busts out some dance moves, quit fitting as this is PWG The Musical. But Talwar and Mercury are a cunning team and soon resort to some classic, old school tactics to isolate Tornado from making the tag to Badd. Mercury in particular displays sound strategy in keeping Tornado grounded, but you can’t keep this whirlwind down forever. A fun opening bout.

Reyes is one half of the famed Havana Pitbulls, who have built a solid reputation via CMLL in Mexico and NJPW in Japan. Kahn is from the Pro Wrestling Iron camp, founded by Mike Modest and Donovan Morgan of the NOAH promotion, also based in Japan. Kahn has a monster presence by sheer size alone and Reyes gives him respect in his initial offence. Likewise, Kahn knows Reyes is a focused tactician. Both competitors try to feel each other out, looking for the advantage, but it’s a stalemate. With that, heavy strikes are launched, followed by some trash talking, with Reyes taking Kahn to the ground. This is a good story telling match with sound psychology, well received by the fans in attendance.

These two have fought each other before from their Revolution Pro days. Some crisp chain wrestling with tight counters & reversals to start things off. But Scorpio ain’t here to dance and decides to get violent like, followed by some vicious submission holds. But Disco ain’t dead and comes back with a vengeance, making this a strong outing by both athletes. There’s a post match beat down, where dissention in the ranks becomes obvious.

Six-man tag action is next with the Thomaselli Brothers (You know… the Thomaselli Brothers from the old neighborhood… that’s right, the same ones) taking on the hot shot X-Foundation team. This was about as even as a match up can get; both teams can wrestle and grab air when they want to. From crisp mat grappling, to high altitude blitzkriegs, this one had it all with never a dull moment. Major sick finisher leads to a potential break up on the part of the losing team.

I must confess to having a soft spot for this bout, only because of the great story that was told.

First off, you have the Fallen Angel Christopher Daniels, a man who can do no wrong and is a must-see talent on the independent circuit and NWA/TNA. B-Boy assumes the role as the young upstart who needs to take out Daniels to elevate himself to a new plateau of respect. From the sound of the bell, it’s Daniels who shows his experience by out wrestling B-Boy, showing the youngster who “Da Man” really is. But B-Boy is up to the challenge and comes back with a vengeance; he wants this win real bad and it shows, punishing Daniels at every conceivable angle. A clash of wills ensues, manifesting into some vicious offence on the part of both warriors. Connoisseurs will enjoy this one.

The Hardkore Kidd welcomes us to another edition of Pro Wrestling Orangutan (Get it? Orangutan… as in an orangutan is a member of the ape family… just like a Guerilla… well actually it should be spelt G-O-R-I-L… ah forget it!)

Kidd gives respect to the host venue Elk’s Lodge, condemns the use of four letter bombs and breaks out Grandma’s Cuss Jar. The point of this you ask? Oh just the simple fact that in one promo, The Hardkore Kidd delivers an imaginative & entertaining segment that out classes anything the writers at the WWE could ever fart into existence.

Oh ya… Teddy Hart shows up and states his willingness to break his neck for the crowd. Had he done so, it would have easily doubled the price on this DVD for sure. Teddy introduces Kidds’ opponents, Lit & Deranged who utilized some fancy double team tactics to take on the towering Hardkore Kidd. Mandatory Teddy Hart highspot comes to pass, only making this entire escapade one of my favorite segments of this disc.

Pre-match remarks are made about Bosh’s stretch marks. Let’s move on shall we. Dragon starts off against Quicksilver and dominates early. Quicksilver guts it out and it’s time for Bosh to enter fray against Excalibur. Bosh proves he’s more than just a mouth, going toe to toe with Excalibur. Dragon returns to the ring and gets evil as only Super Dragon knows how to do while Quicksilver becomes a candidate for the Medal of Valor. Momentum swings back to the favor of Bosh and Quicksilver, which eventually opens the “Oh My God” highspot flood gates, all four competitors delivering some intense offense. Three sick pile drivers later and we got the first in a two way tie for match of the night wrapped up. Gran materia mis amigos!

Joe is simply a power house, a walking arsenal of wrestling devastation. I mean, my body was aching just watch him try to dismantle Dragon. From beating Dragon’s chest into a swollen red welt, to rearranging his spinal column, Joe is truly a terrifying force to be reckoned with in the ring.

But there’s a reason why American Dragon is in such demand in the U.S. and overseas; he is a total wrestling machine. It’s not a matter of if he will go down in history as one of the greats in this business, but when. Despite his opponent having a hundred pound weight advantage, Dragon charges head on, dishing it out wherever openings appear in Joe’s defense with focus and determination.

Both athletes take each other to the limit in this one, presenting an awe inspiring contest of fighting spirit that only these two can deliver with unbridled passion. A fantastic main event rightfully placed as the second match of the night.

Comrades, this is a must have addition to your independent wrestling library. Granted, the camera work is basic hand held, but that soon becomes subliminal when the action takes off on your TV screen. Adding to your enjoyment will be the audience, who are clearly having fun and making their presence known despite their small contingent. I can only hope that I may have the honor of seeing this promotion’s product live in person. Perhaps a financial contribution to the PIWR travel fund can be arranged, compliments of SLAM! Wrestling’s co-producer, Comrade Greg Oliver.