The sixth annual inductions took place at the Izaak Walton league club in Newton. The attendance was approximately 100 people from the Newton area, different parts of the U.S. and Japan. Many former inductees were in attendance such as Danny Hodge, Tom Drake, Mad Dog Vachon, and Verne Gagne. The event was MC’d by executive director of the International Wrestling Institute and Museum Mike Chapman and the author of Jack Brisco’s book Brisco: The Life and Times National Collegiate and World Heavyweight Champion Jack Brisco, Bill Murdock.

The first inductee into the Class of 2004 was Leroy McGuirk. McGuirk was a two-time amateur All-American at A & M University (now known as Oklahoma State). He later became a success in the game of pro wrestling both as a wrestler and a promoter. His first big title was the Oklahoma Junior Heavyweight championship form Hugh Nichols in 1934. He also won the light heavyweight championship for the NWA. McGuirk’s daughter, Mike, known for years as a WWF ring announcer, could not make the banquet this year. Danny Hodge, who McGuirk started in the pro ranks had a few words about his trainer. “Mike was a great wrestler,” said Hodge while inducting McGuirk, who died in 1988 in Oklahoma.

The next inductee was Pat O’Connor, who died in 1990 of cancer. Accepting the award for him was his daughter Carlie. He grew up on a sheep station in New Zealand. O’Connor was a rugby player, served in the air force, was an amateur mat champ in native New Zealand. He was also rated as a great cook. He started in the pro ranks in 1951. He became NWA world champ by defeating the late Dick Hutton in 1959. He also a successful tag team wrestler who won the NWA tag team titles in the early ’60s. He met his wife through Mike Mazurki (the founder of Cauliflower Alley Club) and married in 1954. He developed the O’Connor roll-up in ’60s to win the majority of his matches. He was well known for his training and booking skills in the Kansas City territory. He worked friend and fellow wrestler Bob Geigel. Geigel said of his friend, “Pat would have appreciated this. Thank you.” O’Connor’s two other daughters were there as well.

The next inductee was Kiniski. Kiniski was an amateur in his home of Edmonton and won four provincial championships and an AAU championship. Drafted to play football for the LA Rams, he instead decided to play football in Canada (which was actually more lucrative at the time). He played a couple of seasons in Canada but wanted to wrestle pro. His crowning achievement was winning the NWA world title from the late Lou Thesz in the early part of 1966. Held the title and defended around the world for nearly three years. He also held the AWA world title as well. Kinski was humble on the stage. “Thank you, thank you, thank you,” he said before getting to his jokes. “Throw me inside a wrestling ring, I can go another 60 minutes!”

At the end of his speech, he recognized his sons Kelly and Nick in the crowd, who also were pro wrestlers. “It’s such an honour for my dad to get the award and to see pals and peers like Rheingans, Gagne and Hodge. It was an honour to meet Pat’s daughters. He went on tour with O’Connor in Japan,” said Nick Kiniski. “It was great to see other second-generation wrestlers, George Scott and remember old times. For Dad, Kelly and myself to go on the road together again. I enjoyed meeting the wrestling fans and their knowledge and bringing us up to date with the wrestlers.”

Rheingans was up next. He was a great amateur at North Dakota State. He also has gone on to make two Olympic teams for the U.S., won a bronze medal at the world championships, and won two gold medals at the Pan-Am Games. Rheingans started wrestling pro in the early ’80s, training with Verne Gagne. He also trained Brock Lesnar and Big Van Vader. He did a stint with the WWF in the late ’80s. His crowning achievement as a pro was winning the AWA world tag team titles with another former Olympian, Ken Patera. During his acceptance speech, Rheingans mentioned his injuries in the ring. “I have had two knees replaced, left hip replaced, and a shoulder. I thought this stuff was fake!” The crowd laughed. The first two people he met as a pro were Mad Dog Vachon and Baron Von Raschke. The highlight of his career was the people he met. “I had great coaches, thanks Jim Duschen, Mike and Biv, and all you people out there. Thank you very much.” Rheingans is currently is a booker for New Japan pro wrestling. He wrestled pro for about 14-15 years.

This year’s Frank Gotch award winner was George Scott. Scott was an impressive wrestler for over two decades and often teamed with his brother Sandy. After his ring career, he became a booker for Mid-Atlantic and made some of the big names in the last 20 years such as Ric Flair and Rick Steamboat. He also worked for the WWF for years as an executive. Now retired from the squared circle, he is enjoying his retirement in Florida with his wife Jean. He also was a creative force in starting in the Eblen Foundation that helps underprivileged families. Scott was very gracious in receiving his award. He specifically mentioned his wife and brother, Walter, who were in attendance.

The event wrapped up with Chapman announcing the Class of 2005, determined at a board meeting Saturday afternoon. The Class of 2005 includes living members Harley Race, Jerry Brisco and New Japan great Antonio Inoki. The deceased members are Dr. Bill Miller, Earl McCready and Joe Pesek. They are trying to get former boxing great Muhammad Ali to honour Inoki. For more info on the wrestling museum in Newton please to go the Tragos/Thesz Hall of Fame section in the Dan Gable Museum National Wrestling Hall of Fame.

Lewis Curry is a hardcore fan from Baltimore, Maryland. This was his second induction ceremony in Newton. 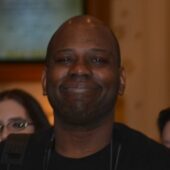