The two living inductees into the George Tragos/Lou Thesz Professional Wrestling Hall of Fame, Gene Kiniski and Brad Rheingans, evoke totally different memories to fans. Kiniski was a heel who delivered non-stop action, Rheingans a classy, low-key babyface who gave it his best.

Yet this Saturday, they’ll be on stage together, honoured along with the late Pat O’Connor and LeRoy McGuirk in Newton, Iowa, the home of the International Wrestling Institute and Museum.

The criteria for induction into the George Tragos/Lou Thesz Professional Wrestling Hall of Fame is very different than the growing Pro Wrestling Hall of Fame in Schenectady, NY. The selection committee, made up of past honorees and a small group of historians selected by Thesz and museum founder Mike Chapman, looks for “true wrestling ability as evidenced by a strong amateur background or by general agreement of the committee, and a large impact on the sport of professional wrestling as evidenced by such factors as titles won and longevity”

“It’s a very, very big honour to be selected by your peers and to go in it with Dick Hutton, Lou Thesz, Ed ‘Strangler’ Lewis, Verne Gagne. To join such an illustrious group is quite an honour. I mean, how high you can get?” Kiniski told SLAM! Wrestling.

It’s the sixth year of inductions, and Chapman said that he expects 150 people or so into the town of 15,000, many of the major names. “It’s very satisfying. We had Jesse Ventura here last year, Bob Mathias, two-time Olympic decathlon champion, and we’ve had movie actors here,” Chapman said. “It’s a great atmosphere. We’ll have six Olympic champions I know here that weekend. So we’ve brought the amateur and the pro world together, and that wasn’t an easy task.”

Chapman is quick to tell purists to relax when their panties get in a knot over the thought of the notoriously-poor wrestler Ventura (awesome talker, though) being in any sort of legitimate Pro Wrestling Hall of Fame. Ventura was presented with the Frank Gotch Award last year, which is given to a wrestler who has brought positive recognition to the sport from his work in and/or out of the ring.

“He’s not in the Hall of Fame. It’s a completely different award,” explained Chapman about ‘The Body’. “And nobody can deny that Jesse Ventura brought great publicity and recognition to pro wrestling. He was on the cover of Time Magazine, Newsweek, he was on every major talk show in America, he’s a governor, he’s a confidant of every top political leader in the United States. That’s what Jesse went in for, that’s what he got the Gotch Award for. He’s not in our Hall of Fame. The Gotch Award is housed in there, but he’s not a member of our Hall of Fame.”

This year’s recipient of the Gotch Award is Hamilton’s George Scott, half of the famed Flying Scott Brothers with brother Sandy and later one of the most instrumental bookers in the Mid-Atlantic region from the mid-’70s to early ’80s, and then the booker behind the WWF era of WrestleMania I and II.

Scott said that he was “thrilled to death” when he heard about the honour. “I remember when this [museum] first opened. I was good friends with Lou Thesz, and he used to come down here all the time, spend time with me. It’s a great feeling,” he said.

Chapman said that Scott was “a good wrestler” but that he is being recognized for his philanthropic endeavours and his work.

“He was the main force behind the formation of the Eblen Foundation,” said Bill Murdock, executive director of the foundation, with families with disabilities in North Carolina. “He has given lots of his time to helping people for many, many years.”

Now a resident of Florida, Scott won’t let recent problems with his stomach, which resulted in a short hospital stay, keep him from the annual golf tournament on Friday in Newton. He’s flying in on Thursday and staying until Sunday.

The former NWA champ Kiniski said he’s looking forward to the trip as much as the ceremonies themselves. For the first time in a long time, he’s travelling in a plane with his two sons, Nick and Kelly, both of whom have legit amateur backgrounds and had decent pro careers. “You get in your travel mode. On the road, it’s a very, very boring life. So I have to hone my skills because the boys will be pulling ribs and stuff, jokes on me,” ‘Big Thunder’ Kiniski said. “It’s the first time the three of us have made a plane trip in a long, long time. We’ll use the plane trip to pull ribs, kibbitz, and stuff like that.” 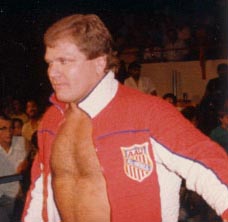 Brad Rheingans is coming in from his home outside Minneapolis. As an amateur wrestler, Rheingans was an NCAA champ at 190 pounds for North Dakota State before going on to seven national Greco-Roman titles. He finished fourth at the 1976 Olympics, and third in the 1979 World Championships. He was a member of the U.S. Olympic team that boycotted the 1980 Games in Moscow. He turned pro in 1981 and worked primarily in the AWA, and had a short stint in the WWF.

Pat O’Connor’s daughter is coming to receive the award for her father, who died in 1990. O’Connor is a former NWA champ and worked for over 30 years as a pro. Later, he was part-owner in the Kansas City promotion. The New Zealand native was a popular personality wherever he worked and competed in the British Empire Games as an amateur.

Leroy McGuirk’s award will be received by his long-time friend, the legendary Danny Hodge. McGuirk was a two-time All-American wrestler at Oklahoma A&M and NCAA champ at 155 pounds in 1931. A world junior heavyweight champion in the pro ranks, McGuirk was blinded in a car accident in 1950. He worked as the promoter in Tulsa, Oklahoma for decades after that, and was instrumental in the careers of Hodge and former NWA champ Jack Brisco, among many others. He died in 1988.

Here’s the schedule for the weekend:

For more info on the wrestling museum in Newton please to go the Tragos/Thesz Hall of Fame section in the Dan Gable Museum National Wrestling Hall of Fame.