Bobby Roode thanks his coach

OTTAWA – What was the World Wrestling Entertainment’s loss is now Total Nonstop Actions’ gain. What the Nashville-based promotion acquired was Peterborough, Ontario, native Bobby Roode. At 6’1, 235 pounds, he is turning the heads of many wrestling fans nowadays as an active member of the Team Canada faction.

But how did Roode go from WWE prospect to the TNA spotlight?

“Basically, it was a phone call from Scott D’Amore right out of the blue,” said Roode in an interview with SLAM! Wrestling, as he explained how the Coach D’Amore recruited him. “He asked me if I would be interested in coming down and doing the X Cup as part of Team Canada. I said I love to do it. They (TNA) took a liking to the whole Team Canada concept and offered me a contract.”

With that, did Roode end seven years of paying dues and chasing the elusive dream of making a full-time living from professional wrestling. “The whole reason for me getting into this business was to make a full-time job for myself. I had my chance with the WWE, so to speak. I did a lot of stuff for them,” he said.

Among those who have followed his career, there has been nothing but praise of his consistent ring performances, backed up by his impressive physical stature. It was that combination that got Roode his streak of dark matches with the WWE, where again, observers noted his potential as a talent with a future.

But that would be as far as he would get with the sports entertainment giant.

Far from being bitter, Roode expressed how his matches with the WWE only further developed his abilities and knowledge.

“It was tons of experience, a lot of knowledge and met a lot of good people who helped me out. It gave me a lot of exposure.”

Now a cemented member of Team Canada, Roode finds himself rooted in the X Division, where he is standing out, literally, given his large frame.

“It’s really different,” he said with a laugh, explaining the contrast in his size and style.

“As far as the X Division style, I don’t really fit that. But I’m having fun and I’m not going to complain. I think that was just a starting point to get my feet wet. I hope, whether it’s X Division or heavyweight or tag team, my success and Team’s Canada success continues.”

Success for Roode seems certain, as he has proven his ability to adapt to the fast-paced, cruiserweight style, despite out weighing the vast majority of X Division competitors. That, and the combination of his size, places Roode in a unique and advantageous scenario. 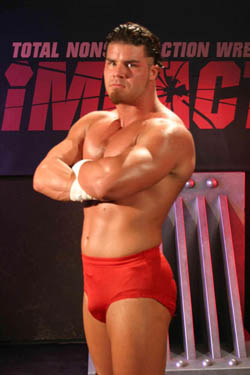 “As for as height and size go with TNA, I’m probably above average which is unusually,’ Roode remarked. “With my experience in the WWE, I felt like a midget when I was there because the guys were so huge, but that’s Vince’s (McMahon) logic which is cool. But with TNA, they’re giving average size guys like myself or smaller guys the chance to go out and prove themselves and become stars.”

The hallmark of any good grappler is his ability to adapt in the ring. Roode, like everyone on the TNA roster, has faced the challenge of adapting to the newly adopted six-sided ring.

“I was nervous, everyone was nervous. But once you get in there, you just kinda go with it. You don’t really notice it when you’re in there. The turnbuckles are little different, it’s not as cornered as a traditional ring. The guys are adjusting and if you watch the show, you can tell there’s a lot more things you can do in the ring and it’s a lot more exciting for the fans. It’s not a problem for me at all,” he said.

Roode must also contend with his three-day travel schedule, as he traverses from his hometown northeast of Toronto, to Nashville for the Wedesday PPVs, followed by television tapings in Orlando the next day. Not to mention, taking various independent bookings such as his recent appearance at the UWA show in Ottawa.

“It’s busy, but this is what I want to do. I can come home and visit family and friends every week, so it’s not like I’m on the road a month at a time,” Roode said, conscious that his travels pale in comparison to the grueling schedule of his WWE counterparts.

Still, Roode made it known that for him, sitting in a car for hours at a time is far more painful that taking bumps in the ring.

“Wrestling does take a toll on your body, but the worse part of it that I find is the traveling. Whether you’re in a plane or a car for so many hours, that’s what kills me. The wrestling part of it I’m fine with. It may not be for a while, but as TNA continues to grow though, we will eventually start doing house shows and we will be on a much busier schedule, so I think right now we should take advantage of the light schedule.”

Having finally stepped into the spotlight, Roode is conscious of his humble beginnings. He made mention of how both WWE superstar Val Venis (Sean Morely) and Puerto Rico-based wrestler Glamour Boy Shane Sewell were both there at the start of his career and continue to mentor him this very day.

“Sean broke me in, taught me for the first bit. After that, Shane Sewell took it from there. I’ve kept in contact with both of them,” he explained. Roode was fortunate enough to interact with Morely during his dark match tenure with the WWE, receiving constructive observations from his fellow Peterborough native.

“When I was having my dark matches, Sean was always there watching, helping out and getting good people around to watch my matches. I owe him a lot.”

“I talk to Shane all the time down in Puerto Rico too. It’s been a while since those days when I was training with them, but I’m glad I did it, because it’s helped me out a lot.”