Ken Timbs, one half of The Fabulous Blondes and The Hollywood Blondes, has died after a lengthy battle with cardiomyopathy and congestive heart failure. He was 53. 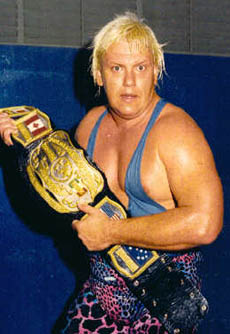 His wrestling career started in 1978, partly by accident. He had been a police officer and a security guard for wrestling shows in Georgia. After befriending a few wrestlers, he began to train and made his debut on the Ole Anderson-booked Georgia Championship Wrestling shows.

“I wore a warm up suit and went to the ring just to let the guy whoop up on me, throw me out, and pin me. I didn’t make the first move, I just did what I was told. This paid off, I became a regular on GCW-TV,” Timbs explained on his web site.

In Southwest Championship Wrestling, he teamed with Eric Embry to become The Fabulous Blondes. The team clicked and feuded with the Rock’n’Roll Express, among other teams. Later. Timbs would team with Dusty Wolfe as The Hollywood Blondes. He also was successful in the Central States area around Kansas City, feuding with Bulldog Bob Brown, and worked Florida, Continental, ICCW, AWA, WOW, Deep South and countless independents.

Timbs became Fabulouso Blonde in Mexico. “The Mexico era of my wrestling career took me to new heights. Wrestling as Fabulouso Blonde, I had publicity sent worldwide. I acquired their version of the World Light Heavyweight title from Lizmark and was the first foreigner to receive this honor in twelve years. I won the title two more times during my career in Mexico,” Timbs posted on his site.

Following Mexico, Timbs would venture throughout South America, reigning in locales such as Guatemala.

Over the last number of years, The Fabulous Blondes were reunited online at www.oldschool-wrestling.com, where they participated in the chat sessions and the message board.

“Ken was and always will be the father of OSW. We put a lot of his time and effort into the site and board and it makes me happy to know that it meant so much to him. He met and cared for a bunch of people, and it was not uncommon to be greeted by Ken when you first joined the board or the chat. It’s touching to me, personally, to see how a friend of mine touched so many people from all over the globe in a positive way. He would have loved the tributes and posts you guys have put up since he passed on,” Bob Moniz wrote on the site.

Timbs is survived by his wife of 28 years, Juanita, with whom he had eight sons and one daughter.