Pro wrestling, like life, is often about who you know. For Winnipeg’s Miss Kitty Karson, it was both who she knew to get into the business, and who she made friends with that helped shape her career.

Growing up in Winnipeg, Karson (real name Brenda Kubic) used to go to the Winnipeg Arena with her dad and her uncle. She remembers watching the likes of Bobby Duncum, the Sheik, Ken Patera and other stars of the AWA. Her favorites were the Fabulous Ones, and she struck up a friendship with Steve Kerin and Stan Lane of the Fabs. 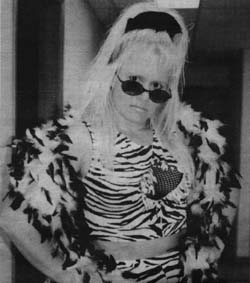 Eventually, Kubic decided that she wanted to become a wrestler too, and sought out Keirn for advice (though he had jumped to the WWF as Skinner). “I caught up with Steve, we talked and I told him what I wanted, and he told me that I was going the right way,” she explained to SLAM! Wrestling. “He gave me some hints about the business … I followed my dream kind of thing.”

Kubic sought out Tony Condello for training and debuted at age 18. The 5-foot-5 blonde was dubbed Miss Kitty Karson, and was used as both a wrestler and a valet in Condello’s WFWA promotion. One of her charges as a valet was The Natural (Don Callis).

“She approached me. She wanted to be a wrestler and she did,” recalled Tony Condello. “She worked just for a short period of time. She would have been really good. Then, I don’t know, she just pulled away.”

It was difficult for Kubic to find women to work against in Winnipeg. One briefly shared training time with her, and once she started to become established, local promoters had to bring women up from places like Minnesota to fight her. On occasion, she even took on the male wrestlers like Caveman Broda and Rick Jones.

Edmonton’s K.C. Houston was one of the women imported to take on Kitty Karson. “I think Kitty was more basic wrestling moves, where I was more into the power moves and wrestled a little more like the guys,” she said. “That does go with experience as well and I think if they would have brought in more ‘talent’ for her to work and train with she would have developed farther and possibly had more opportunities.”

Like many Winnipeg wrestlers, Karson did get a chance to go on Condello’s ‘Northern Death’ tours of the tiny towns and reservations in northern Manitoba in the middle of winter. In fact, she did two tours. “Two too many.”

A recent documentary tried to portray what it is like for the wrestlers who go up north. Karson said the recent crew had it easy. “When we went up north, and we wrestled, it was a hundred times worse than what they showed on TV. We took an old school bus, we didn’t have vans. I guess this is aging me also, but we had an old school bus and Puppy Dog Peloquin was the driver of it. I tell you, the stories on that bus. It was mixed. It was females, males, midgets, we were all mixed together in a school bus and we were on our way. And if that school bus went down, we all went down.” It was common for all the crew to sleep in the ring at night.

She recalls Bulldog Bob Brown, Peloquin, Buffalo Bill Cody and Chi Chi Cruz from the tours. Cruz really stands out. “The WWE talks about Owen Hart, how wonderful he was and he was a family man and really perfect. The one guy I would talk about is Chi Chi Cruz. He’s a Mr. Wonderful,” she said. “I respect him 102%. Out of all the guys that I ever toured with, he was the most decent guy to tour with. And I’ve traveled a lot, believe me.”

Kubic worked pretty well full-time in wrestling until 1992, supplanting her income with odd jobs here and there. Besides Condello, she would travel down to Minnesota to work for Wally Karbo until he died, then she stuck with Ken Patera. “I was wrestling, wrestling, wrestling. Then I was in a bad car wreck in 1992. I was out of commission for a year.”

KC Houston (Kathy Stockton) is one of her closest friends in the business. “Brenda is a great girl and we became friends and still keep in touch to this day,” Houston said.

A couple of years after her accident, Karson got a call from Houston about a gig in Las Vegas. A company was putting on a wrestling show there for their employees at the Thomas Mack Arena. An agent had contacted Houston (following a referral by fellow Stampede grad Owen Hart) and told her to pick another girl to work with on the show.

“It was like a mini, one match WrestleMania,” recalled Houston. “I needed someone that could kind of blend into the crowd and there is no way Rhonda [Sing] could have pulled that off, so I asked Kitty if she would like to do it. She hadn’t worked for a while, but I knew I could get a good little match from her and I wanted to see her again.”

The headliners for the show were Hulk Hogan and Brutus Beefcake, but in reality, it was set up that the men were seconding the women. “They had built it up that the two big bosses of the company were going to wrestle, which was never going to happen,” said Houston. Instead, Kitty and KC acted as their secretaries. “Hogan and Beefcake did a little wrestling shtick and then Kitty and I started yelling at each other and I jumped her and the match was on. Nobody expected it! After some time Hogan and Beefcake pulled us apart and that was the end of the match. It was a good time.”

Karson explained that she had Hogan in her corner, and Beefcake was in KC’s corner. “That was very, very special,” Miss Kitty said. “We both went out there and gave it our best. They had a video of it, it was for a special promotion … That was a great experience for her and I. It was a good experience for Hogan and Beefcake also because they met some Canadian girls who knew how to work and knew how to wrestle.”

It turns out that was Karson’s last match ever, making for a 10-year career. She misses it. “Watching it now, and seeing everything that is out there now, I would love to be in the shoes of some of the girls there now.”

At 35 now, Karson finds it a little tougher than it used to be. “The body is aging, and because of old wrestling injuries also, it’s harder now to maintain a healthy lifestyle, but I’m trying it. That’s my next goal.”