Wrestlers are renowned for their toughness, their ability to fight through pain and put on a performance regardless of their own circumstances. Moose Morowski, however, has encountered a new foe that has put him into a wheelchair.

In February, Morowski went in for back surgery at a Vancouver, B.C. hospital. Following the operation, he got an infection, and it moved up his spine. 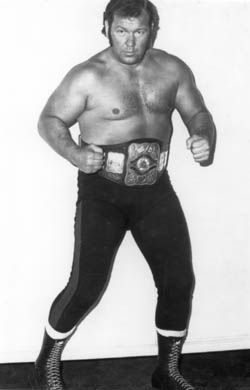 The 68-year-old Morowski chuckles now when he remembers his state. “The pain, it was just unbearable.”

He and his wife Nancy tried to find someone who could help allieviate Moose’s suffering. With doctors unavailable, and others diagnosing his pain in his back as “muscle spasms”, they tried to get him into a hospital.

“I went to the emergency ward at the hospital near our place here three times, and I went to the hospital where they operated on me. They said there’s no room, and they turned me away,” Morowski said. “I was taking so many pills and painkillers, I kept passing out. Finally, my wife called the fire department. They came and took me to Vancouver General. As soon as I went in there, they emergency CAT-scanned and right into the operating room. I woke up about three days later and I don’t remember nothing, because I was so full of infection.”

The combination of the infection and the second operation have left him unable to walk on his own. “I’m at the point now, I can’t stand up on my own or nothing. I lost 30 pounds, but I lost all of my muscle because it effected the part that got damaged in my spine when they operated a second time to try to get rid of the infection. I guess they did something to the nerves in my legs, and my muscle control and everything like that.”

Now, he can only stand up with the aid of a crane, and works out daily with a physiotherapist.

Born Stan Mykietowich in Winnipeg on July 6, 1935, he got into amateur wrestling at age six, and the pro version following 11 years later. “I was always a big aggressive kid. I left home when I was 12 years old, working for a living. I was impressed by wrestling and decided I was going to be a professional wrestler,” he recalled.

His pro training grounds were Winnipeg’s Olympian Club, 400 Club and Madison Club, along with trips to Minneapolis to get beaten up, starting at just 17. “You go down to the States, and you’re young and you wrestle the hardcore wrestlers at that time, and they think, here’s a young punk coming in … if you took it, you always come back, and if you come back, you have a chance of making it.”

There are many promoters that made a difference in his life, from Wally Karbo in Minneapolis, who dubbed him Moose Morowski (“It stuck with me all the time”), to Dory Funk Sr. in Amarillo (“He was one of the most honest promoters you could wrestle for. You learned an awful lot if you were willing to learn”), to Al Tomko, who was running Winnipeg at the time (“He was the one that gave me the big break”).

With many Western Canadian grapplers, however, one name stands above the rest. “One of the biggest influences on my wrestling career was Stampede Wrestling for Stu Hart, because he gave you a chance. If you produced, and if he liked you, from there it gives you a lot of confidence. At that time, there were so many territories that you could go to. If you did good, and you built up a name, you could always go all over the place, and that was the idea of it.”

And Morowski really did travel just about everywhere. “There’s no professional wrestler in Canada that travelled more than I did, in the countries that I wrestled in.” And once his name was established, it wasn’t hard to get booked somewhere new. “They were always looking for talent all over the world. Once you got yourself established, then promoters are willing to use you if you have that name.”

His resume could be mistaken for an atlas: Puerto Rico, Trinidad & Tobago, Antigua, Australia, New Zealand, 20 trips to Japan, South Africa, Rhodesia, Germany. “Millionaires couldn’t afford to do what we did at that time. We always enjoyed ourselves. The nightlife was fantastic.”

Morowski got off the road and came home in 1983, and worked locally through 1984. His last match was in 1994 when he teamed with Rocky Della Serra in a losing cause against Atomic Punk & The Bodyguard in Cloverdale. He has done a lot of volunteer work with people who have brain injuries, and helped out Kilarney Minor Hockey and Lacrosse for 10 years.

Family and friends will obviously be a big part of any recovery for Moose. He recently went home for the first time in three months. “It was just wonderful to get home with the family,” he said.

“Two days is enough for the family. I have a handicapped daughter as it is. She was in an automobile accident when she was six. She’s in a wheelchair. Her and I are sharing the same room. That’s why I quit wrestling. I was wrestling in Europe, then when the accident happened, I came home and retired. I just wrestled a little bit here. Then I did all the therapy with her, because she had to go to school and everything. She’s independent now.”

He has had lots of visitors and letters in the hospital, and many of his wrestling running mates aren’t in that much better shape than he is, the years of bumps taking their toll. Don Leo Jonathan came by: “He’s walking around, he’s using a cane now” and Freddy Baron was a particular inspiration: “He was in that serious motorcycle accident. He’s doing good. He’s walking, running, working out again. If he can do it, I can do it.”

Morowski has always been a positive person, and his good humour kept doors open for him in promotions around the world. His determination to get better is fierce, but realistic. “I’ll be back … you just have to plug away. Nothing comes easy. I found that out a long time ago.”

Ahh Moose Morowski, a big man in his day. One of his favourite sayings (as he flexed his big pythons) “you don’t buy these in a drug store!” A good friend of mine’s dad knew him very well and he used to tell us about the size of his breakfasts Moose would consume ie: 12 eggs, a pound of bacon, half dozen potatoes and half a loaf of bread! I remember him as a on again off again regular of All Star Wrestling and they usually matched him against the territory’s newest bad guy to see if the villian could cut it. I also remember him going to Germany in the early eighties and winning several heavyweight trophies for Canada. He was one of the reasons I was a fan of wrestling in the late 70’s early eighties and I hope he is well today. Thanks Moose for the memories!
Brad, iamevilb

Moose was like a real dad to me at All Star Wrestling. He taught me what I needed to know and tested my learning abilities every Saturday in Cloverdale as he clubbed and slammed and beat the hell out of me. But never once was the term POTATO, CROWBAR or STIFF OLD BASTARD ever used by me, and that’s because I learned my lessons well and knew enough to NOT give Moose any reason to show me a real POTATO, CROWBAR, or STIFF SHOT. Moose would only say “IT’S GOOD FOR THE BUISINESS KID”
Thanks to the Moose I had the opportunity to wrestle in south Africa, Austria , And Germany. Also thanks to the Moose I met my lovely wife while on tour overseas.
Thank you, Moose.
Your old heavy-bag, WOJO THE B.C. HULK (GOLIATH YAWRENKO)