Moose Morowski, who died on Saturday at age 81, knew that he was of different stock than most. “Us, we’re a different breed,” he said about professional wrestlers once.

He would certainly be one of the toughest. 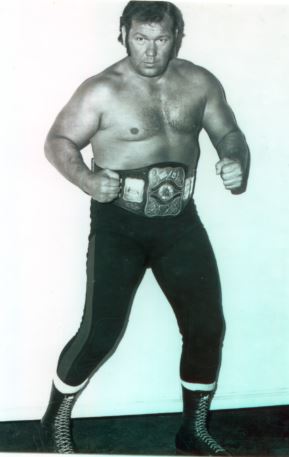 “You know me, I don’t bullshit, because I’ve been everywhere, I’ve wrestled the toughest guys in the world, and I knew the best and the toughest,” he said in October 2011. “A lot of guys fabricate stories and that irritates me, when you listen to some of these guys.”

The late Dutch Savage, who always had the gift of gab, had great respect for Mad Dog Morowski, who he brought into Oregon to be led around on a chain attached to a dog collar. “He was just easy to work with. Do anything at all for you. Tougher than Kelsey’s get-out though. You didn’t mess with Moose too much.”

Morowski faced health issues for at least a dozen years that saw his body deteriorate following back surgery, from needing a walker to being bed-ridden for the last few months, reluctant to talk to or see any old wrestling buddies, lest they remember him as he was then instead of in his glory days.

Born Stan Mykietowich in Winnipeg on July 6, 1935, he got into amateur wrestling at age six, and the pro version following 11 years later. “I was always a big aggressive kid. I left home when I was 12 years old, working for a living. I was impressed by wrestling and decided I was going to be a professional wrestler,” he recalled.

His pro training grounds were Winnipeg’s Olympian Club, 400 Club and Madison Club, along with trips to Minneapolis to get beaten up, starting at just 17. “You go down to the States, and you’re young and you wrestle the hardcore wrestlers at that time, and they think, here’s a young punk coming in … if you took it, you always come back, and if you come back, you have a chance of making it.”

A few years back, Morowski described those Winnipeg clubs where he got his start.

“The Madison Club was more of a boxing club. They staged their wrestling outdoors next door because it was a way of making money. Then eventually when Gordie Mackie sold out to Mike Pastrack and Al Cummins, then Al Cummins and Mike Pastrack sold the Madison Club, which was in St. Boniface at that time, sold out to Al Tomko. That’s when Al Tomko was running everything then, that’s when he was promoting Winnipeg for Verne Gagne. He ran the Madison Club at the same time. They drew good because they had Bob Brown, myself, Ted Styfanic, Lloyd Antonnation, Curly Gagne.”

Both the Madison and Olympian wrestlers were essentially part-timers, as they generally had other jobs waiting for their big break in the business. “At that point, I was running a hotel. I was a bartender, running a bar, in the Curtis Hotel,” he said. 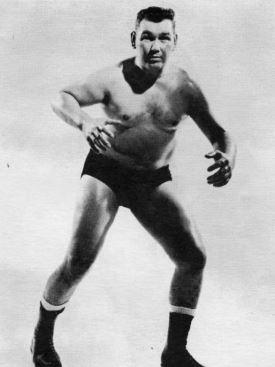 Working TV in Minneapolis for the AWA was his entry into the big time, in part because he himself was big. “There were only a couple of us that used to go and do the TV in Minneapolis for Wally Karbo at that time and Verne Gagne. I got to know Karbo, and I guess because they always wanted big guys for TV, and I was pretty big at that time, about 265, 270 maybe, I got to know Wally and they liked me, they’d give me a break and brought me in. A couple of times they’d give me the TV matches plus a house show match so the money was good, American money at that time. It was worth it, plus the experience you got.”

It was in Kansas City that he established as more than an underneath guy and obtained his green card. “From there, I went all over. I went to Oregon, then I came back here and wrestled for Kiniski in Vancouver and Oregon. I went to Kansas City, then to New York. From New York, I went to the Carolinas, then also for Atlanta. Plus all the trips I made to Japan and that. I made use of traveling. I didn’t like staying in one area. At that time, you had to be an ass kisser and all that.”

There are many promoters that made a difference in his life, from Wally Karbo in Minneapolis, who dubbed him Moose Morowski (“It stuck with me all the time”), to Dory Funk Sr. in Amarillo (“He was one of the most honest promoters you could wrestle for. You learned an awful lot if you were willing to learn”), to Al Tomko, who was running Winnipeg at the time (“He was the one that gave me the big break”).

With many Western Canadian grapplers, however, one name stands above the rest. “One of the biggest influences on my wrestling career was Stampede Wrestling for Stu Hart, because he gave you a chance. If you produced, and if he liked you, from there it gives you a lot of confidence. At that time, there were so many territories that you could go to. If you did good, and you built up a name, you could always go all over the place, and that was the idea of it.”

And Morowski really did travel just about everywhere, working for his guess, at least 30 different promotions. “There’s no professional wrestler in Canada that travelled more than I did, in the countries that I wrestled in.” And once his name was established, it wasn’t hard to get booked somewhere new. “They were always looking for talent all over the world. Once you got yourself established, then promoters are willing to use you if you have that name.”

Have suitcase will travel. “The business is what you make of it. You hear the good and the bad. If you don’t like it, then move on to another territory.”

He might not have been on the top of every card, but then not everyone needs to main event to make money or earn respect either.

“A good guy, a great character. He’s the only guy I know who made more money on his back than anybody else. He was a hell of a jobber,” said his long-time friend Angelo Mosca a few years back. “He wasn’t just one of those squash jobs.”

Morowski knew how to give back to the business too, said Buddy Wayne, who worked for Al Tomko’s All-Star Wrestling in the mid-’80s. “When I first came to Vancouver he scared me, like the rugged vet who doesn’t like young guys. We turned into great friends who would sit and talk every show,” said Wayne. “I met him for Raw in BC in ’99 and as soon as we got to the back every agent came running to him. Pat Patterson went and got Vince [McMahon] to meet him. They then went and got his kids and their friends’ pictures and everyone signed them.”

There was a reason that Morowski was a great resource. He knew he stuff, he knew everybody, and had been everywhere.

As Buddy Wayne summed up: “If you just shut up and listen, you can learn everything there is to know about wrestling from him and great stories.”

Morowski died on Saturday, September 10, 2016. Funeral arrangements are not known at this time. We will have more details, and at least one more story on Moose, in the coming days.

Greg Oliver interviewed Moose countless times — he was a wonderful man and a wonderful resource. Hanging out with him in Las Vegas at a Cauliflower Alley Club reunion remains a favourite memory, especially when Bob Leonard brought over a photo of Moose wearing nothing but his birthday suit and a wrestling belt.