The rap on the Cena DVD

Yo yo yo. J-Dubs is here, talking all about the new screener.
Y’all know this dude, bustin rhymes in arenas.

He’s one of Smackdown’s best, he’s rollin’ with the U.S. belt,
His opponents couldn’t see him, his beatings are what they felt. 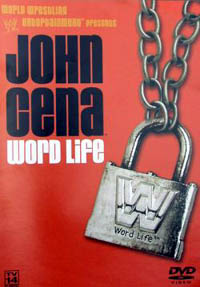 The dude is John Cena, and he’s got his own DVD.
Take it from J-Dubs, this is one you gotta see.

The vid starts out with Cena’s first rap,
Dressin’ up on Halloween, lookin’ like a total sap.

Who knew the gimmick would stick, that he’d become a major star,
Check out the “Before They Were Superstars” extra to see that he’s come far.

The DVD is loaded with the rhymes from this fly brotha’,
He’s cutting on the boys (and a couple of their motha’s).

Check him talkin on Vinnie, and rappin on Billy,
Man did he just make Brock look silly.

A couple other stars get all up in his zone,
Testing out their skillz on the microphone.

Cena shoots them down, Rikishi, Angle and Spanky,
He makes Funaki cry and Big Show reach for his hanky.

In between the highlights we check out John and his crew,
Illin’, chillin and playing Playstation 2.

Later he kicks it in Iraq, cutting on Saddam Hussein,
Check out the Confidential features to learn more about his game.

Of course there are matches, some top-notch bouts,
Against the masters of power and the rulers of tap-out.

Benoit, Lesnar, Taker are all here,
Eddie and Kurt face him also, but he’s got no fear.

Been too busy kickin back, enjoyin May 2-4?
Well now’s the time to shop, head over to SLAM!’s e-store.

Lay down your Benjamins, or if you prefer, your John A’s.
This thug’s DVD is boss, it’s here to stay.

J-Dubs is out, but before I go
Just one more note that I gotta show

Wanna see more of my words? Head over to my dot com.
Just like the old sayin’, you gotta come get some.