To many fans, though, Terry Taylor will forever be known as the Red Rooster.

It’s hard to believe that a man with such a diverse career, both in and out of the ring, is mainly remembered for a gimmick that lasted only about a year. A gimmick dismissed for the most part as a goofy comedy routine — the character wore a red-dye crown of hair and routinely flapped his arms and crowed like a barnyard fowl during his matches. 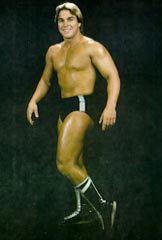 But as he told SLAM! Wrestling at last month’s Border City Wrestling card, Taylor accepts that he will carry the Rooster tag with him for a long time to come — he’s just thankful that he’s even remembered at all.

“If the bottom line of our business is people remembering who you are — the marketability, the carving your niche — then in 1989, the Red Rooster was cutting edge. It was something new and different, nobody had ever seen anything like it before. It was eleven and a half years ago that I did the Red Rooster and people still remember that. And half as many people probably know who Terry Taylor is, and I did that for 15 years.”

Taylor’s wrestling career extends even further back, though, as he donned the tights for the first time back in 1979. A friend of his who worked for the Florida wrestling office invited him to go to a show in Tampa. A lifelong fan, Taylor was thrilled to accept the invitation — a decision that changed his life.

“The next day, we went to a live TV at the Sportatorium, and Chick Donovan didn’t make his flight. Eddie Graham, who owned the company, came up and asked me if I had my tights. I didn’t have any — I wasn’t a wrestler — but I said that I did. And he said that I’d be (wrestling against) Bugsy McGraw, and that we’d have three minutes. So I had a couple of the guys show me how to lock up, I borrowed some boots and tights, and I went to the ring. Bugsy kicked me so hard, he bruised my children. It was the most exciting three minutes of my life. And then I was off and running.”

From there, Taylor took the national tour, jumping from Tennessee to Atlanta, to Kansas City, Charlotte, and Memphis, working for a variety of promoters and promotions, including Mid-South Wrestling in Memphis and with the Von Erich family in Texas up to the end of 1988. His WWF stint as the Red Rooster took place in 1989 and 1990, and he had been jumping back and forth between the WWF and WCW until the latter’s demise earlier this year.

His last duties in WCW were on the booking and writing team. Although it was a fun time for him, one senses that Taylor grew frustrated with the management of the company by AOL Time Warner. He notes the lack of communication from the top-down as one major problem he faced.

“When I was with WCW, I found out who was coming to the territory from the insider sheets because Eric (Bischoff) and the upper management wouldn’t tell — they were ‘too busy’ to tell us. Once, I had Eric come ask me how Goldberg was coming along, that Goldberg had been sent to the school three months earlier. I’d been writing Nitro and Thunder by myself for those three months, I didn’t know he had even been at the Power Plant. There was just no communication.”

Another difficulty encountered while booking was the lack of management focus on a clear goal for the company.

“It was like the Vietnam war,” he says. “We were allowed to fight, we just weren’t allowed to win. There was too much politics, too much talent telling you what they would and would not do. This isn’t like sprinting, the guy who gets from Point A to Point B first wins. A lot of this is subjective to who is in charge, and who they decide they want to promote. I don’t care who he is, if a guy is great and doesn’t get promoted, he isn’t going to get over. And the guy who isn’t good and gets promoted, can. We just weren’t allowed to promote the right people.”

In an environment like this, Taylor continues, it’s little wonder that overall company success became a secondary priority to people’s personal interests.

“In WCW, there was too much negotiation with the boss and with the boys. The talent cannot produce themselves, though they think they can. They always put themselves first and the product second. That’s not a knock, that’s human nature.

“That’s what’s happened with our business. There used to be a group of guys who loved it, would bleed for it, tear a knee up and work the next night because they loved what they did and felt an obligation to the guys that were within that fraternity to go out no matter what and perform. There was an honour to that. We did what we had to do to give the fans their money’s worth because you owed that to the business.

“And now, it’s the other way. The talent feels the business owes them. Guaranteed salaries, arguing about first-class air travel — we never had that. If we didn’t work, we didn’t get paid. I’ve had eleven knee surgeries. Why? Because I kept working when I was hurt and I didn’t want to let down the guy I was working with. I couldn’t have that on my conscience, knowing that this guy wouldn’t be paid because I wasn’t going to work. Now if someone’s hurt, they take time off. It’s automatic, send him to the doctor, pay for an MRI, anything so (the company) doesn’t get sued. They don’t do it for the love, they do it for the money.”

“It’s good for some guys who make incredible amounts of money and become huge stars. Then, there’s the other 90%, who slave away and love it, and pay the price and sacrifice, and nobody ever even knows they’re in it. Those are the kind of guys that don’t really do it for the money, they do it for the love. And without them, there would never be the big stars. But nobody said it would be fair.”

Listening to him speak about the state of the wrestling industry and the changes it has undergone since his heyday, Taylor’s passion is evident. But despite his passion, Taylor isn’t so sure that he’s making a difference with the newer breed of sports entertainer. It’s a battle he feels he can’t win.

“I can’t change the business or fix it… it will never change because Terry Taylor wants it to. Performers now don’t care about the business like we used to. I was up ’til 3 in the morning helping (BCW owner) Scott D’Amore write this TV (taping’s script). Everyone else is out there drinking, chasing women, not thinking about what they should do. Is that somebody who’s doing what’s best for the business? I can’t win it.” 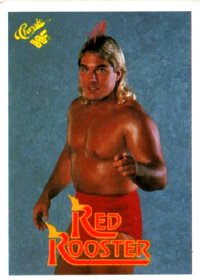 If there is any consolation for Taylor, it’s that he is finally comfortable with the thought of packing it in for good. Six months ago, Taylor never imagined that he could live without the business. After being told by Vince McMahon that there was no opportunity for him in the WWF or WCW, his first reaction was that the world would come to an end. However, after talking it over with his wife and family, and reflecting on the possibility of a future life without wrestling, that feeling has faded.

“My priorities have changed. I had two kids grow up that I never got to see their first steps or send them off to first grade. I never saw any of that, because I was too busy giving what I thought I should to this business. I see it differently now. Now, I’m a 46 year old who’s been married for 17 years with a 20 year old kid and a 12 year old who need their father. I’m very happy being at home.”

Only Taylor knows when he will be hanging up the boots for good — as of press time, he’s still scheduled to appear at the October 10 BCW show. But when he does, it’s safe to say that he’ll have no regrets about his retirement, nor of the career that preceded it.

“I’ve had a great life, a good run. I never was World Champion, I never made a million dollars. But I never needed any of that, that’s not why I did it. I never did it for anything but the joy during the five or ten minutes I was out there in front of the people… that was my reward.

“From not seeing my kids grow up, to my wife being sick and me not being there, to driving 100 miles per hour and being in car wrecks which nearly killed me, working hurt. To do all that to be around a group of guys who believed in something as much as I did… there’s no better feeling. I’m very happy with where I am and how I got here. I wouldn’t change a thing.”