It’s hours before bell-time, and the ringside area is full. But it’s not full with fans waiting for Border City Wrestling’s ‘Mikey Whipwreck Retirement Bash’ to begin. Rather, right now, the ring is surrounded by the company’s entire roster, the guys who will be part of tonight’s show. Every one of them, from rookie to established star, watching intently, staring in silence, learning how to hone their craft.

For in the ring, Terry Taylor is putting on a wrestling clinic. 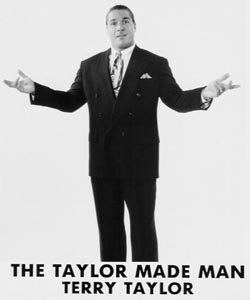 He goes through several different lessons for his impromptu class: How to throw a better clothesline, how to sell a kick, how to avoid getting your teeth smashed in accidentally. Showing them new spins on old moves and standard routines. Teaching them in-ring psychology like how and when to interact with the crowd. Part coach, part guidance counsellour, part drill sergeant, his words are the only sound in the entire room.

“Why would you do that? The audience won’t buy that… This is the most important thing you’ll ever learn in wrestling… I don’t know why guys like to do this, because it never works!” Each lesson followed by a demonstration on an eager volunteer. Often, to drive his point home, he uses anecdotes and stories from his personal experiences and observances of other wrestlers. “Ric Flair does this all the time… Steve Austin does this better than anyone I’ve seen… Do this, and you’ll look like the Iron Shiek.”

After the session is over, after every question has been asked and answered, Taylor heads to the dressing room to prepare for the night’s show. In the ring, his pupils ready themselves for their matches, discussing among themselves what they have been taught, trying out the techniques demonstrated by their professor, bouncing further ideas off each other using his teaching as their springboard.

“I do it because I love it,” Taylor tells SLAM! Wrestling about why he conducts such sessions. “I want to bring back some of what this business used to be.” For Taylor, that means returning back to a day when storytelling was done in the ring. It’s a far cry from today’s standard, where a match on TV could be given as little as two minutes, and an interview can go on for ten or more.

“I wrestled Killer Karl Kox, who could have the crowd happy or sad just by doing whatever he did in the ring. The art of what he could do is gone. I liken the state of professional wrestling now to Hollywood. Is there a great actor who can thrill someone with their performance without pyrotechnics or computer-generated monsters and make money? I don’t think so. Now it’s the Scorpion King with $80 million worth of special effects, or the Star Wars movie, or Jurassic Park. It’s all done with computers, it’s bells and whistles. Same thing is happening with our business. The audience is not satisfied with somebody going out there and pouring their heart out and trying to take someone on an emotional roller coaster ride. They’re too discerning, they’re too sophisticated. They want more.”

The wrestling industry is changing, no doubt about it. A few years ago, hitting an opponent with a chair was seen as a brutally violent tactic — today, it’s considered fairly tame. Back then, a wrestler who performed a move off the top rope was daredevil, a risk-taker. Today’s high spots are from the tops of cages, or in some cases, platforms and balconies 30 feet up or higher.

Yes, it’s what the audience has come to expect, but that doesn’t necessarily make it right, says Taylor. Nor is it right that the wrestlers continue to risk life and limb to meet these sometimes unfair expectations put on them by the fans.

“A lot of young guys think that because the audience cheers ‘ECW!’ or ‘You (messed) up’, they should immediately respond and do something to make the audience like them. Screw ’em. The audience will never tell me what to do. (If) they sit there and chant ‘Boring’, I’ll sing right along with them,” he says, waving his arms like a conductor to emphasize his point. “If I have a guy in a headlock, and they say ‘we want blood’, I stand up, make them think I’m going to do something huge, and then put the headlock right back on the guy.”

“The guys now, if the fans aren’t screaming all the time, they start to panic, when ultimately the fans shouldn’t dictate the match. A movie doesn’t speed up or slow down because the audience is cheering. You get what the movies give you. Guys now aren’t sure enough about their craft to be able to dictate what they give the audience; the audience now dictates what happens. And that’s completely backwards.”

And at the end of the day, says Taylor, if he can teach someone that, then his job is done.