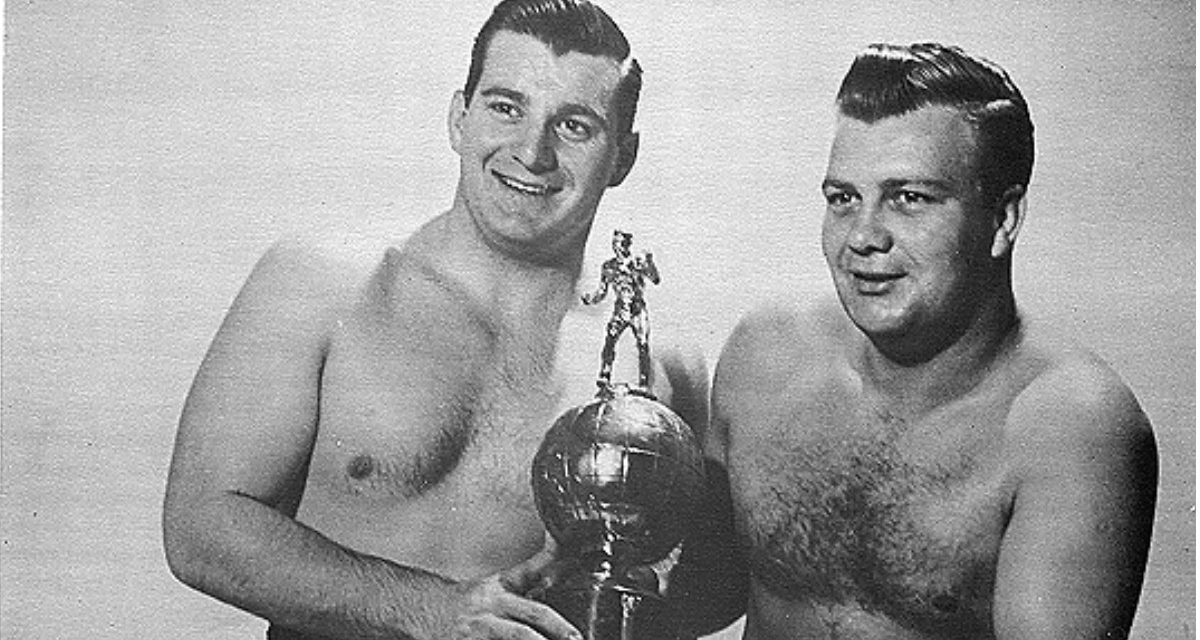 There are two distinct sides to the wrestling life of the Hamilton, Ontario-raised George Scott.

First, there was George Scott, the wrestler, who was a solid competitor both in singles and tag matches with his younger brother Sandy from 1948 to 1972.

Then there was George Scott, the booker, who made the Mid-Atlantic territory sizzle in the ’70s and early ’80s, and was the calm hand behind the WWF at the first two WrestleManias. 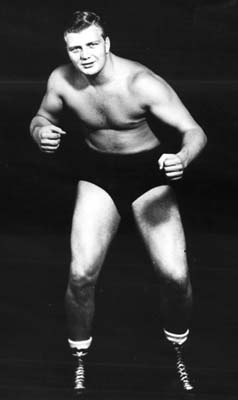 Where to begin, then, when sitting down for dinner with George, his non-wrestling brother Walter and Walter’s wife Evelyn? Well, why not at the beginning.

George Scott was born in Dalmeny, Scotland, but his parents actually lived in Hamilton, and were visiting relatives. Angus (Sandy) was the next born, followed by Walter. They also had a sister named Geannie who died young. Their father was a milkman in Hamilton.

As a youngster, George was into hockey, basketball and roller-skating. He began amateur wrestling at the YMCA at 12 and started weightlifting at 13. “I used to get in fights and get the crap beat out of me. I had to do something!” he said with a laugh.

The Scotts lived close to the home of the Sharpes — Hamilton’s best-known wrestlers at the time, Ben and Mike Sharpe, whose father was a policeman. “They were heroes of mine,” Scott said. “I used to go sit on their door step.”

Martin Hutzler was the other one who made a difference. Hutzler faced a young George Scott one day at the YMCA and came away impressed. “He beat the crap out of me but could not pin me,” Scott said, explaining that Hutzler even tried all the dirty tricks like hair pulling and eye gouging. Two years later, George saw Hutzler after his first pro match and Hutzler didn’t recognize him. “He and I became the best of friends after that.”

Though it’s a little unclear in the mists of time, Scott figures that his first match was at age 17 in Wasaga Beach. He claims that he was never actually ‘wizened up’ to the worked nature of pro wrestling, but that the education “just came along as you went along.”

Frank ‘Scotty’ Thompson recalled the young man he met in the late ’40s. “I first met George Scott in the Brantford armories. He looked far too young to be in the business. He was there trying to get Joe Maiche, the promoter and biggest thief in the business, to book him. I had not been in the business too long myself.”

At 18, George sent some photos to Toledo, where Jack Pfefer promoted, on the advice of fellow local grapplers. To his surprise, Pfefer brought Scott to town, where he dubbed the youngster Benny Becker. “I’ll never forget this. He says ‘you’re going to be my 19-year-old wonder-boy,'” Scott recalled, adding that he was quick to reply that he was only 18.

Scott learned a lot in Toledo. “Some of the oldtimers adopted me as their son,” he said. During his time in Toledo, he got to fight Buddy Rogers twice and figures he took on Gorgeous George at least 15 times — “plain George wrestles Gorgeous George”.

Georgia and North Carolina followed his stint in Toledo, and then came Toronto under John Katan.

In 1952, George was paralyzed for six months after a match with Buddy Rogers in Florida. “I remember him kicking me in the back,” Scott said. He went to work out the next day, then “I crawled to my apartment on my hands and knees.”

He passed out in the bathroom, and the light was left on. A friend came by and, seeing the light on and Scott not responding to his knocking, broke into the apartment and got Scott to the hospital. The local hospital said it was a deep bruise in his hip and he used up four tickets on the plane back to Toronto to be comfortable enough.

In Toronto, he was diagnosed as having three ruptured discs in his back. Scott opted not to have surgery because the doctor told him he wouldn’t be able to wrestle again. Instead, he took a year off, living with his parents.

Jack Laskin was just breaking into the business as George was off injured. “George hurt his back and was incapacitated for quite a while,” Laskin said. “This was just before I broke into the business with John Katan and Tunney. We ran a couple of stags and fundraisers for George to help him get back on his feet.” 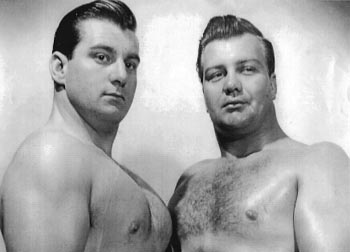 For George, it was tough. “I had to start all over again,” he said. His parents didn’t want him to go back into wrestling either. “They were always afraid of me getting hurt. His mother wanted him to be a police officer. He worked for a while as a bouncer at a bar, and was offered a chance to manage the bar, but turned it down to return to wrestling.

In 1953, his brother Angus entered the wrestling business too, and was billed as Sandy. Though George doesn’t have a lot of good things to say about his brother now — “I wasted three years of my career with him” — he did help his brother break into the business. (Their break is of a more recent vintage. George Scott explained his side. “I don’t keep in touch with him. He and I had a falling out when our mother passed away and he never showed up for the funeral. Couple of other things happened that he did to me, and I’ve never bothered with him since.”) 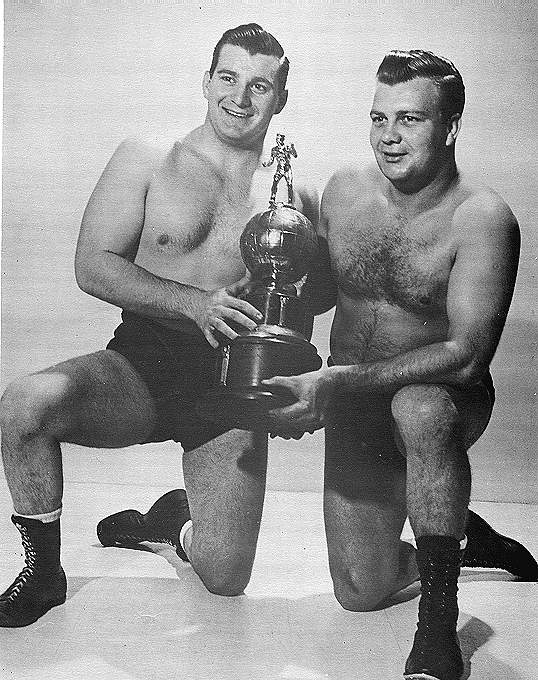 Sandy and George Scott in the 1950s. – courtesy Bob Leonard

The Scotts were a well-respected team back in the ’50s, however. “George and Sandy Scott were a very good tag around Toronto and Buffalo territories in the late 50’s and early 60’s and then they moved to the Carolinas where they did very good,” recalled The Destroyer Dick Beyer.

George Scott spent six years in Calgary with Stu Hart’s Stampede Wrestling, mostly teaming with Sandy. “I love Calgary,” he said. “We did great business out in western Canada.” One time, he recalled the promotion turning away 6,000 as the Scotts were facing The Miller Brothers in a main event.

Calgary was also the site of George’s biggest ‘missed opportunity’. Whipper Billy Watson was coming in to Calgary as the champ and had sent a list in advance of people he wouldn’t face from the territory — Luther Lindsay, George Gordienko and George Scott.

It turns out that George had upset The Whip years before in Toronto when he worked against Lee Henning in a semi-main event. A newspaper wrote about the match stealing the show the next day. “From then on I never left the first or second match,” he explained.

Whipper was facing Killer Kowalski in Calgary and the fans began chanting “We want Scott”. Tuesday night in Edmonton, Watson offered Scott the chance to be his tag team partner back in Toronto. Scott recalled responding ‘I don’t need you Watson’. “Biggest mistake I ever made in my life,” he said. Billy Red Lyons took the role and rocketed up the ranks.

In the ring, George Scott was just about always a clean-cut good guy. He is most associated with Calgary, where he helped Stu Hart with the booking, and the Carolinas, where he eventually became the booker for Jim Crockett Sr. Even when he was wrestling in the Mid-Atlantic area, Crockett Sr. wanted to keep Scott around. “I turned down Japan three times,” he said, explaining that Crockett Sr. would always offer him something to keep him in the Carolinas.

After breaking his neck during a match in Texas in 1972, Scott’s in-ring career ended, and an even more influential role as booker was about to begin.