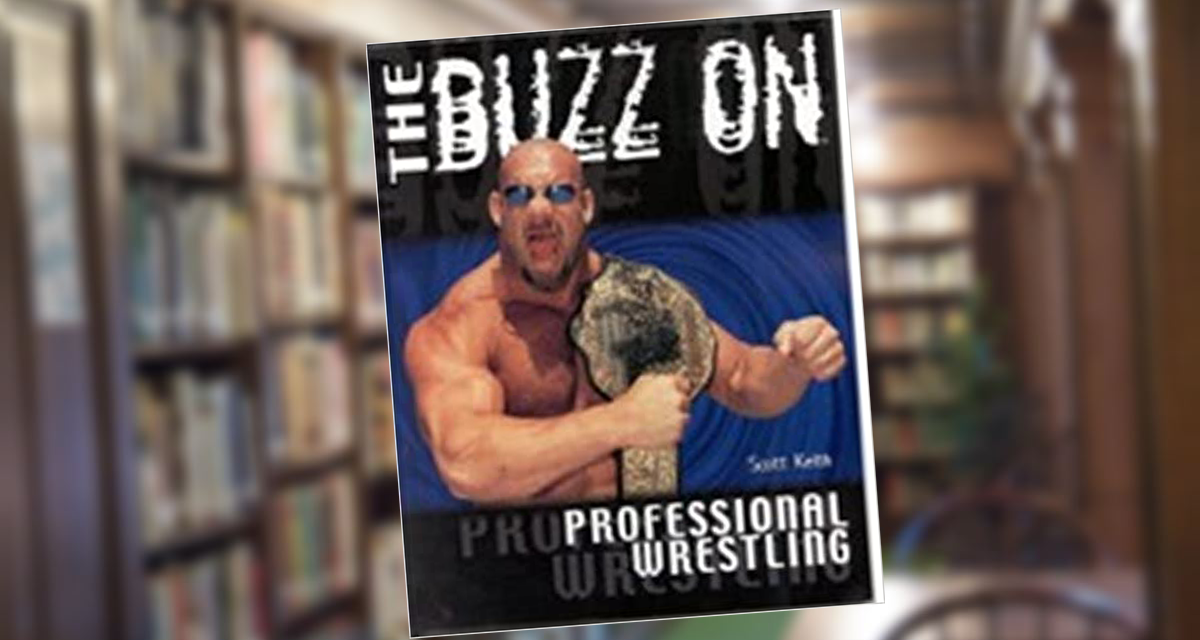 By MICHAEL JENKINSON — For SLAM! Wrestling

Twenty-six-year-old Edmonton resident Scott Keith has launched his literary career on the unlikeliest of subjects. He’s written an intelligent, insightful and interesting book about professional wrestling.

At the moment, Keith may be an unknown in his own home town, but he’s quite well-known in cyberspace where he has written articles and columns for a number of professional wrestling websites.

Last year, he was given a chance to put his vast knowledge of the sport and spectacle that is professional grappling to work for real (which is to say, for money). The result is The Buzz on Professional Wrestling, a history of the “modern” era of wrestling, from about 1980 to the present.

Writing about Buzz is full of conflicts of interest for me, so I’ll be upfront about all of them. I’ve known Keith for years. I like his writing. He was kind enough to let me read and critique the finished draft of his book before it was sent to the publisher.

Still, whatever little objectivity I have left says this is a great book. I devoured the draft copy in about two readings, reliving the long-forgotten exploits of wrestlers I watched in my youth.

The final version, the one which went on sale last Thursday, is laid out in an easy-to-read format, chock full of pictures and just as good a read as the plain-paper draft I saw last fall.

The book is organized both chronologically and by subject, going through the last two decades of wrestling history while stopping from time to time to focus on some of the biggest and most influential names to have entered the squared circle, like Hulk Hogan, Ultimate Warrior, Bret Hart and Steve Austin.

But a book on who won and who lost in a fixed sport isn’t particularly interesting until you know why a particular wrestler won or lost, and that’s where Buzz truly shines. Keith brings the reader behind the scenes, where the real battles take place. For what goes on in the dressing room and booking meetings is far more important than the scripted matches played out night after night in front of the paying audience.

Like the time Ric Flair, recognized as the world champion by the Atlanta-based World Championship Wrestling, was pinned in Japan by Tatsumi Fujinami in a title match. By the long-established “rules” of pro wrestling, Fujinami should have been the WCW champion.

But WCW didn’t recognize the title change for political reasons you’ll have to buy the book to read about (it’s too long and complicated to get into here).

Or the infamous Montreal double-cross, where Vince McMahon, head of the World Wrestling Federation, took his world title belt off Canadian hero Bret Hart in a match where Hart thought he was going to keep the belt. In a nutshell, Hart was leaving for rival WCW, and McMahon was scared he was going to show up on WCW’s TV show with the WWF title belt. To prevent that from happening, McMahon changed the outcome of the match – and never told Hart. Even for a wrestling match, it was “fixed.”

When discussing one of these complicated backstage political power struggles manifesting itself in a bizarre in-ring outcome, Keith notes in the book that “Stuff like this happens all the time in wrestling, and it’s best not to dwell on it too long.”

Though re-reading Buzz last week, it was impossible not to dwell on that kind of thing for too long, as the book demonstrates a wrestler’s destiny is more likely to be determined by who his friends are in the dressing room and whether he’s chummy with the guy writing the scripts than whether the fans buy his T-shirts and chant his name while he wrestles.

There have been a lot of quick-and-dirty books put out in the last couple of years by publishers hoping to capitalize on the popularity of pro wrestling. But none can hold a candle to The Buzz on Professional Wrestling, the best book of its kind on the market today.

Not one to rest on his laurels, Keith is already working on a book specifically about the WWF. It’s expected to be published early next year.

MIKE JENKINSON is a long-time wrestling fan based in Edmonton. Email him at mike@the-newsroom.com. You can also check out The Newsroom: Michael Jenkinson’s homepage.