Japanese legend Tatsumi Fujinami will be the 12th inductee into International Division of the Professional Wrestling Hall of Fame. He recently took time to answer a few questions from SLAM! Wrestling in an email interview. 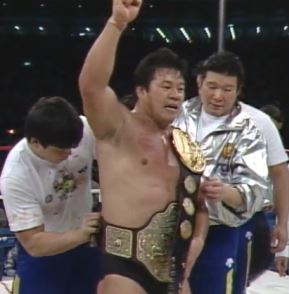 Born December 28, 1953, in Oita, Fujinami was trained by Antonio Inoki before making his pro debut in the Japanese Pro Wrestling Alliance as a 17-year-old. He went with Inoki when he formed New Japan Pro Wrestling a year later and in 1975 was sent to the U.S. and Mexico to gain experience. He captured his first title on January 23, 1978, defeating Jose Estrada for the WWWF Junior Heavyweight title in Madison Square Garden.

He returned to Japan and became a top star, with Inoki and Hisashi Shinma building the junior heavyweight division around him. Fujinami was one of the best overall workers in the company and helped establish the credibility of the junior division among Japanese fans. In 1981, New Japan moved him to the heavyweight division to make room for the original Tiger Mask.

Then, in 1989, while considered alongside Ric Flair as the top worker in the world, Fujinami was stricken by major back injuries — the culmination of the grueling schedules and vicious poundings he had been subjected to over the years. He eventually returned to the ring, although he was never quite the same, though some of the biggest matches of his career, against the likes of Ric Flair, Vader, and Riki Choshu followed.

Fujinami was inducted into the WWE Hall of Fame in 2015, and this May, will enter the Professional Wrestling Hall of Fame, based in Wichita Falls, Texas. The Japanese legend is making the trip for his induction, and will receive his ring and in a decidedly-Texan twist, a cowboy hat.

Here is the Q&A conducted by email:

SLAM! Wrestling: What does it mean to be inducted into the Pro Wrestling Hall of Fame?

Fujinami: I’m very happy and very honored to have been inducted to the PWHF.

SLAM! Wrestling: What kind of treasures are you lending to the Pro Wrestling Hall of Fame for display?

Fujinami: I’m planning to lend them a ring costume.

SLAM! Wrestling: Did you keep a lot of mementos from your wrestling career?

Fujinami: Having a career that spans 45 years, there are so many memories and pieces of memorabilia.

SLAM! Wrestling: How can the Pro Wrestling Hall of Fame gain better recognition in Japan and in the rest of the world?

SLAM! Wrestling: How does it compare to being honoured by the WWE Hall of Fame?

Fujinami: I feel that it really is a prestigious honor to have been inducted into the WWE Hall of Fame.

SLAM! Wrestling: You made numerous trips to the United States during your wrestling career. What are some of your favourite memories from those trips?

Fujinami: That would be in 1978, at Madison Square Garden, when I took the WWWF Jr Heavy Weight Champion title.

SLAM! Wrestling: As far as I can tell, you just wrestled for Stampede Wrestling in Calgary a little in 1979. Is that your only time wrestling in Canada? What are your memories of working out there? Did you go to the Hart House?

Fujinami: I remember he was very slightly built but his body was like steel, like no wrestler I had come up against before.

SLAM! Wrestling: Bad News Allen Coage was someone I dealt a lot with through the years. He had a lot of respect for you, and said you could keep up with him in training — and that you called him Grandpa. What are your memories of Bad news Allen Coage?

Fujinami: He knows me from my many overseas tours I guess, and we just hit it off.

SLAM! Wrestling: WWE recently brought back its lightheavyweight title; can smaller workers succeed in the U.S. the way they always have in Japan?

Fujinami: My advice would be to have a solid grounding in the basics, and from there it’s up to the individual and how much effort they’re prepared to put in! Also, in today’s world, it’s important to have good English skills.

SLAM! Wrestling: “Cowboy” Johnny Mantell tells a story of you knocking out a tooth of his during a match, but you didn’t know it was already a fake tooth. Do you remember that incident?

Fujinami: I certainly remember the name! He struck me as wrestler strong in the fundamentals of the sport!