Kingdom James name should have been Kingdom Jack. 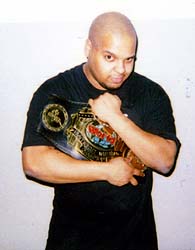 He is a Jack of all the performance trades.

“I do Yuk-Yuk’s every once in a while.” from the back of a car that was being towed outside of Buffalo when SLAM Wrestling spoke with the young fighter. James was returning form Pittsburgh with a couple other wrestlers when the car broke down. “There’s a big group of comics that are wrestling fan’s at Yuk-Yuk’s.”

James even think that the two businesses are very similar. “Norm Macdonald is a heel” and the people love him for it.

James feels that his experience on the comedy stage plays a very positive role in how he is able to perform in front of the wrestling audience.

“I have no qualms about burning an audience,” James explained. “Sometimes it gets me into trouble in the best sense of the word.

Once it got him into trouble in the worst sense of the word. James was in Detroit, wrestling for Insane Championship Wrestling. “Fans attacked me and took chunks out of my neck,” James described.

But James loves to wrestle in Detroit. “It’s the only place that a black man can come out to the ring use a southern accent and claim to be the world’s greatest promoter.”

James has spent the past few years wrestling across Ontario and the northern U.S., but he got his start as a writer and artist for a small wrestling “dirt sheet” in the mid-eighties.

During that time James met a few wrestlers and worked as a ref. He began to train with Jim Demarco but stopped for a while until he decided to join some friends who were starting the Renegade Wrestling Alliance.

In his first match in 1995, he won the heavyweight title for the now-defunct R.W.A. Although the Toronto-native does not view the R.W.A. as a positive experience he believes the lessons learned will help him out with his new promotion Northern Frontier Wrestling which runs its first show Saturday.
“I’ve been in promotions that dropped the ball,” James recalled.

He went to his first match south of the border with Sexton Hardcastle (known to most wrestling observer’s as Edge.) The two continue to be friends.

“It’s a parasitic business,” he said.

If a promoter looks to hire James he always tries to get friends work as well.

He worked for a company in Cincinnati known as Heartland wrestling where he faced Ricky Morton of the Rock and Roll Express .

“Old bastard taught me a lot,” James laughed. “He took me to school.”

James hopes that all of his training will pay off when Northern Frontier have their first card in Toronto on Saturday afternoon at Thunder night club on the Danforth.

I met Kingdom James recently. I travelled with him and other wrestlers to Pittsburgh. It was actually my car that got towed home from Buffalo…
lol…
In Pittsburgh he wrestled Moonshine Zeke in a great match. He really ripped into the fans, and had them on their feet… They tried to tear him down and he just punched right back with great comebacks… He won that match when he leaped almost the whole way across the ring landing an off the top rope leg drop for the win…
Dave P.