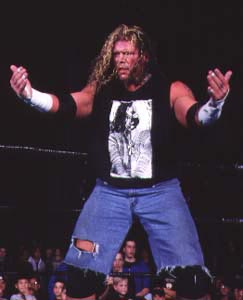 “I had done everything there was to do and I needed to make some money because I really wasn’t making s–t there,” he said. “I was lucky enough that just as the wave started to peak I jumped on and caught the ride but I definitely think that it was a symbiotic relationship. I did as much for them as they did for me.”

“I had done everything. I had every major feud that I wanted to have. I’d done every major angle and there was no money,” continued Raven. “[WCW honcho Eric] Bischoff had been wanting to bring me in off and on for the previous year. He just hadn’t offered me the right amount of money and finally I said ‘this is what I want’ and he said ‘I’ll give you that’ and I said ‘allright’ and I came.”

And while Raven is unquestionably proud of his initial ECW days, he is also a realist about the influence ECW was having and how long they had until the WWF and WCW took notice and copied their style.

However, while his first run with ECW helped change wrestling, instituting the more hardcore style, pushing the limits of subject matter and crossing the lines a number of times in both regards, his return to ECW was less than the stellar impact that his first tenure had been. Raven agrees.

“I wasn’t utilized and I wasn’t motivated because I don’t think Paul E. was that motivated. I think Paul E. had too much going on and he couldn’t stay focused on the booking and when he’s focused he’s brilliant but he had too much going on with TNN and everything else that he couldn’t stay focused, and I think it just trickled down,” lamented Raven. “I wasn’t used as well as I could have been or I was the first time I was there and I think I lost motivation, which is still my fault, it’s still my job to keep myself motivated but my drug problem had become worse and things had spiraled down, as they always do. I knew getting clean was on the horizon so I really wasn’t too worried about it, to be honest. I kind of spent the time having fun. I really had a lot of fun when I was there in ECW, at house shows, goofing off, but now it’s time to get serious again.”

While it may have indeed been a long, strange trip for Scott “Raven” Levy, he has finally come full circle, emerging in the company he once left to stake his own claim as a wrestler and establishing himself as a hardcore icon in the process. After surviving the WWF, ECW, twice, WCW and himself, creating a hardcore legacy and helping to pioneer the “extreme” style, his biggest challenges may be behind him. Yet, the WWF can be as unforgiving as it can be as uncaring about a wrestler’s past achievements and notoriety. Will Raven succeed in the WWF? All the attributes are present, only time will truly answer the question … What about Raven?