Raven: At peace with himself

Despite constant rumours of a reformation of Raven’s Flock-Nest, WWF superstar Raven is unaware whether the crowd-pleasing move will ever come to pass in the WWF. “I have no idea, I don’t know anything,” Raven said. “But, I’m all for it, it’s fine. I like having a group of guys. What I like about it is that the finishes can be so much more complex the more people you have at your disposal to run false finishes with. So to me, I’m all for it but by the same token, if they want me by myself that’s fine.”

Throughout his extensive career in professional wrestling, the dark side of Scott “Raven” Levy has become just as (in)famous as the hardcore, brawling, bleeding wrestler, a fact that neither Levy, either as himself or Raven, has ever shied away from. Be it in interviews or on national television — his drinking and addictions were highlighted frequently in ECW to develop his Raven persona. However, the Raven of today is a far cry from the disturbed, brooding nihilist of the past, at least behind scenes, if not on camera.

“I’m clean and sober. I haven’t had a drink in three years and I haven’t done any drugs in seven months. It’s pretty easy, actually,” said Raven. “I did what I wanted to do. I did enough drugs. I whored around. I did everything in life that I wanted to do and I wasn’t happy. I knew it was time to make a change. Plus, I didn’t want to die. I didn’t want to be a casualty. It’s so not cool. How cool is it to die from a drug overdose?”

“Not to trivialize, but I always told all my friends that when I decided to quit, I’ll quit and that’ll be the end of it,” continued Raven. “They were like, ‘No, you can’t just quit, it’s not that easy.’ But it is or at least it is was for me. I just decided I wanted to stop doing it. Plus, not only did I quit for myself but I knew that if I was still a drug addict then the odds of me getting into the WWF would be slim to none and I just didn’t want to see my career end without getting my shot here.”

And what of the accusations that the Raven of today has toned down because of sobriety, or that his persona no longer reflects the man? Raven will have none of it.

“Just because I’m no longer miserable and I’m no longer a drug addict doesn’t mean that doesn’t still inform my life, the history will always affect it,” said Raven. “Now, I’m much more carefree. I’m much more at peace with myself. I don’t hate myself anymore. So, in many ways I’m not that character but in many ways I’ll always have that character inside of me, so, I’ll always be informed by it.”

“The problem with drugs,” Raven continued, “is that you are either one of two kinds. You can either take them or you can’t, and you won’t know until you take them, so there’s a big risk. I always knew that I would be able to quit but I think that’s very exceptional, I’ve never found anyone else who can go ‘I’m done and I quit’ and that was it. I don’t recommend it to anyone but I don’t discourage it either. I’m not going to say don’t do it because I don’t want to be a hypocrite. I think you need to make your own decisions but unfortunately you also have to live with them and it’s not always easy.”

Raven has obviously always made his own decisions and lived with them, good or bad. From walking out on a producing job in WWF to going to WCW from ECW at arguably the height of their influence, to quitting WCW, to his years of hard living and subsequent cleanliness, still many are of the theory that his path of excess and addiction may have prevented him from becoming an star in this industry even sooner than he has.

Again, Raven will have none of it. 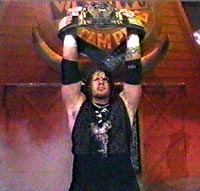 Raven as the United States Heavyweight Champion in WCW.

Although it may not have affected his professional life, he knew it could have if it wasn’t dealt with. “It could have ended my career prematurely if I didn’t quit because I wouldn’t have been able to come here,” stated Raven. “But, I’ve always been a smart man, I knew when it was time to quit, both for personal and business reasons. I think more than anything it has become a stigma, but, ultimately, even if I wouldn’t have carried that stigma I wouldn’t have been able to break into the ‘big ten’ in WCW, so I wasn’t going to break in there. The stigma didn’t hurt me at all in ECW, it added depth and a level of realism to it, so it didn’t affect me there and now I’m back here again.””Honestly, I don’t think it [the addictions] affected me negatively because it never was a problem for me. I never let it affect my work and it only really became well known because I allowed it to be,” he revealed. “When I was in ECW the first time, I guess it started to escalate there, but it didn’t really matter. I made it part of the character because I thought it was interesting. I got to WCW and it really didn’t matter because it didn’t affect my position. Then I get to ECW again, by now my problem had become a ‘problem’, but it still didn’t affect my job. Paul E. was going to use me the same way, regardless, so it never really did affect me, honestly.”